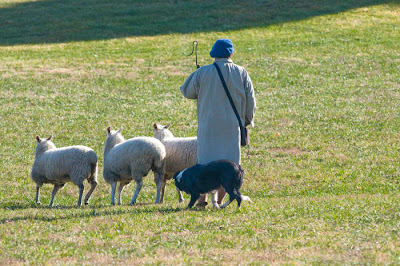 Our two-week road trip touching five states in southern Appalachia confirmed to us a confused and troubled nation.

We found people who are living in the past because they haven’t adapted to change, or grown beyond cultural prejudices, hatred and fear. Others we met re-enact the past – the parts that are heroic and demonstrate the great strengths on which this nation was built.

There are folks who embrace dialogue, others who hear only the voices they agree with.

And there are clearly folks who are facing harder times.

The American economy is so bad that even shepherd Steve Riddle is facing a layoff.

A shepherd. That’s right – the guy to whom “crook” takes on a whole new meaning is a victim of downsizing.

Riddle, 44, from Worden, Illinois, was running some sheep with his talented sheepdogs for a re-enactment of the pioneer era held at Cumberland Gap National Historical Park in Kentucky. A little toot on Riddle’s cow-horn whistle, and his 9-year-old pooch partner Rerun was on the move turning the sheep toward a log pen.

An Illinois state employee for 19 years, and just a year before he might have been eligible for an early pension, Riddle said he’s been given notice that his job at Cahokia Mounds Historical Park is being eliminated at the end of November.

Except for anything related to Abraham Lincoln -- whose bicentennial is being celebrated in 2009 – the State of Illinois is cutting back on its parks and recreation staff to save money, lamented Riddle, who sadly doesn’t bear the slightest resemblance to the nation’s 16th president but makes a fantastic late 18th Century shepherd.

Riddle and his wife, who does spinning, have a small farm and three children, ages 21, 16 and 14, so he’ll be looking for work. Judging by his demonstrations at Cumberland Gap, he’s great with animals and kids, so give him a call.

The shepherd was among dozens of people we met across a road trip of nearly 2,000 miles. Stories about some of them made it into my two weeks of daily blogging, while those of others – like Steve Riddle – did not. So he and his picture, taken by Bonnie, lead the road trip wrap-up report as I turn through the pages of a couple of filled notebooks.

There were plenty of memorable words spoken by folks we talked with, some of which we recounted in earlier blog postings. Here’s a mix:

“You know the difference between a violin and a fiddle? A violin has strings; a fiddle has strangs.”

“If I breathe my last breath right now, I will be happy that I shared their story with you.”

– Kitty Wilson Evans, 69-year-old slave re-enactor and retired elementary school teacher who is the oldest of 14 living children in her family, telling an entirely white audience at Cumberland Gap of the hard lives endured by her ancestors who also were among the nation’s pioneers and how they dealt with adversity. No family’s story should ever be lost, she said, imploring the people around her to talk with parents and grandparents about their lives and experiences. “Know where you came from so you know how far you’ve come.”

“Right now, we are at least civil in our hated. We at least talk to each other.”

– “Deacon” Jones, a retired deputy police chief who portrayed a freed slave at the re-enactment and was expressing fear at the thin veneer separating racial harmony from violence in today’s America. It is a fear that tempers his joy at the possibility of Barack Obama becoming president.

“I just hope that this will be a healing process for the United States.”

– Richard Allison, white 72-year-old educator, sexologist and Florida-North Carolina Democrat, on the prospect of an African American president. He was out promoting the candidacies of several local Republicans in Bryson City, N.C. – clearly an involved citizen with friends on both sides of the aisle.

“Do you believe in Jesus Christ?”

– Breakfast hostess at a West Virginia motel, looking at my Annapolis Unitarian Universalist Church sweatshirt and trying to ascertain what it meant. My answer: “As the son of God, not really – but if there is a God, aren’t we all God’s children?” Her response: “You don’t believe in God?”

“I don’t know if Jesus could straighten this mess out.”

As we drove through Appalachia, we watched gasoline prices steadily decline. Our first fill-up, on the road in southwestern Virginia, cost $2.99.9 a gallon (you’d think we could dispense with that nine-tenths of a cent and just round it off!). Our last, on road back through middle-western Virginia, was $2.32.9.

A week before the Nov. 4 election, the price of gasoline had vanished as an issue – almost as if it were planned that way, to help the Republican cause.

Unfortunately for the John McCain cause, the economy plunged right along with it.

Say it ain't so, Joe

And after two weeks in the hinterlands, Joe the Plumber is still being invoked. Except he’s become Joe the Political Scientist, saying Barack Obama’s plans “sound like Socialism to me.”

But remember – he’s not even Joe the Plumber. He’s Joe the Plumber’s Helper. And his kind of thinking is taking people right down the political toilet.

Coming attractions: A visit to Great Falls of the Potomac, and comments from Real Muck readers.
Posted by David Ettlin at 10:32 PM