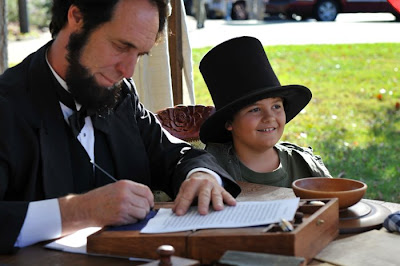 “If you’re going to shoot me,” the president said, “come sit over here.”

It was an odd juxtaposition in time, as Lincoln impersonator Dennis Boggs brought the slain president to life for an historical reenactment staged at Cumberland Gap National Historical Park in Middlesboro, Kentucky.

The occasion this weekend was the park’s first celebration of “Pioneer Roots of Our Nation’s destiny: The Lincoln Family Moves West.” While the trailblazing through the gap has been largely the story of Daniel Boone, Lincoln’s grandfather brought his family through as well – and so the former president was invited.

Lincoln was out of synch with time in two directions – from the vantage point of being surrounded by 21st Century tourists, and joining an encampment of re-enactors, some of them actual descendants of the early pioneers, depicting life in the late 1700s when Boone cut the trail westward through the mountains here.

Less than 100 yards away from Lincoln, Kitty Wilson Evans, a retired elementary school teacher, was portraying a slave and recounting the children’s games, folk tales and hard work of the older era, and exhorting her growing audience to make sure the stories of their own families are passed down across generations.

Nearing 70 and the oldest of 14 living children in her family, Evans stressed the importance of knowing “where you came from so you know how far you’ve come.”

It was no stretch to apply that mantra to the reality of here-and-now, with an African-American as the leading presidential candidate ( so the polls indicate) less than two weeks before the election.

Leonard R. “Deacon” Jones, who told of his “memories” as a slave child being suspended over the plantation owner’s dinner table to fan away flies and later as a freed man helping in the westward passage through Cumberland Gap, was keenly aware of how far – and expressed both elation as an African-American and fear.

The elation was that an African-American could run for and have a real chance at winning the presidency.

The fear was of what might happen if that candidate should win, and the worst crime imaginable follow that victory.

Jones said he was shocked at the vile threats heard in national television news coverage from voices in the crowds at John McCain/Sarah Palin campaign appearances, expressions of the hatred that still hides beneath the veneer of American life.

“Here we are the most civil we’ve been as a nation, and people are talking like that on national television,” said Jones, a commercial photographer and retired police official who feared “the potential for violence, for upheaval.”

“‘Right now,” he added, “we are at least civil in our hatred – we at least talk to each other.”

But except for our conversation, the day was about history, about costumed people acting out roles like sheep herder, weaver, wheelwright, salt maker.

“Salt was more valuable than gold,” an authentically clad Charles S. Brown said of the migration years dating to the 1760s, because it was the only way to preserve food. It was brought out in 50-gallon pots from natural salt licks hollowed out by animal tongues – and the pioneers taking it had to fear attacks by Native Americans for whom the area would be a rich hunting ground.

“The most laborious task was keeping the fires going,” said Brown, standing over a bubbling pot of brine and noting that the salt cut out from the lick would be only about 7 percent pure and needed to be boiled down for use. It would take hundreds of gallons of brine to produce 50 pounds of pure, dry salt, he said.

A paint salesman in his 21st Century life, the 60-year-old Brown said he dresses in his frontiersman garb on long hunting weekends, even makes his own knives. “I carry green coffee beans and roast my own coffee.... I’m kind of hard core. I just believe if you’re going to do it, do it right.”

Michael Delp had an easier role – playing a fiddle, an instrument he took up just two years ago. “But I don’t know many songs,” he laughed.

In his reality life, Delp said, he produces the socks worn by re-enactors – so being there is both hobby and his living. “I’m really fortunate to do what I like to do, and make a business out of it.”

So, too, is Dennis Boggs, who says he loves portraying Abraham Lincoln, which has been his profession (Meet Mr. Lincoln) for nine years – ever since he was acting in a community theater and a director offered him the role. He just had to do a little studying, and memorize excerpts from a dozen speeches.

But it became much more for Boggs, who has studied book after book on the life of the nation’s 16th president and even puts an eerily familiar autograph on copies he hands out of the Gettysburg Address. He spins tales about his childhood pranks for youngsters in his audience, and just as quickly explains for an adult questioner his personal thoughts about emancipation for the slaves and the timing of his announcement.

For another adult, the ersatz Abe recalled how he was opposed in the 1864 presidential election by former Union Gen. George McClellan, whom “I fired.” McClellan, he noted, ran as the “peace candidate.”

Then he invites a young boy or girl to take the seat at his side, picks up his black top hat, and plops it onto the child’s head. It drops all the way over the youngster’s face, and then the president lifts it up slightly, and gives a broad smile.
Posted by David Ettlin at 1:08 AM