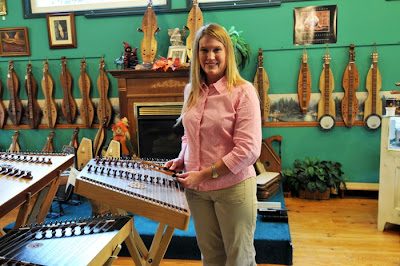 Cherith Millar stands with some of the instruments at the Wood -N- Strings Dulcimer Shop. Appalachian dulcimers made by her father line the back wall.
(Photo by Bonnie Schupp)
The simple pleasure of music
brightens a miserably rainy day
Into each Road Trip, a little rain... actually, it poured for much of our Thursday wanders, limiting the adventure – but not so much that it lacked a great discovery.

This one was musical, as we headed from our overnight in Pigeon Forge, Tennessee – yes, that’s native soil to Dolly Parton, and now a miles-long strip of hotels, fast food, souvenirs and entertainment spun off from her singing fame and busty frame.

But it was miles from Dollywood where we noticed on the side of U.S. 321 – locally known as Lamar Alexander Parkway in Townsend, Tenn. – the Wood -N- Strings Dulcimer Shop.

For an hour, we admired, plucked and gently hammered on the merchandise, which included a marvelous instrument for adults and children alike: a beginner’s steel drum. It comes with instructions, a play-along CD, and the notes marked on each little metal hump. I called it a Christmas Contender at $199 plus shipping.

But we did not go away empty-handed, as I bought for Bonnie (OK – I charged it on our collective credit card) a laptop dulcimer, with case, stand, picks and a couple of collections of Irish folk and Celtic sheet music inserts that slip right under the 15 strings. It all came to less than a hundred bucks.

The shop was full of music, as folks like us – and even a guitarist who knew what he was doing in checking out a fine six-string mode – played and toyed with strings of all sorts.

Presiding over the shop was Cherith (pronounced Ker-ith) Millar, whose father, Mike Clemmer, makes the beautiful Appalachian dulcimers sold there. You can check him and store out at this link: http://www.clemmerdulcimer.com/.

It all kind of made me wish I had learned to play music. But just tapping the sticks on the steel drum and picking at the laptop dulcimer turned up sounds to produce a smile on a rainy afternoon.

And then I had a bad idea

Leaving dulcimer paradise, I suggested heading 20 minutes in the opposite direction of our next photographic travel destination to check out historic Cades Cove, an early homestead area for Tennessee settlers now part of the Great Smoky Mountains National Park.

We had visited the place about 17 years ago, and shared one vivid memory of crazy tourists getting out of their cars and vans and campers with their cameras to take pictures of some cute little bear cubs crossing the road (and ignoring the menace posed by Bear Mom maybe 50 yards away).

This time, we were crazy to even go there on a rainy day. Lots of other people had the same idea, and the nearly 15 miles we traversed over its one-way, single-lane loop road turned into a nightmarish traffic jam cruising along most of the time at less than 5 mph. And it was just plain soggy weather.

We escaped in time for an early dinner at the Friday night Shoney’s special all-you-can-eat steak buffet in the city of Maryville, and moved on to our intended destination of Loudon, for which a travel magazine editor was seeking photos. In the drizzle and mist, we didn’t see much evidence of this being a tourist draw, but we’ll be back in the morning.

Seems like every town we visit has at the least a neat old courthouse and a couple of antique stores. And after a good night’s sleep, I have no doubt we’ll find another tale from the road for tomorrow.
Posted by David Ettlin at 12:39 AM