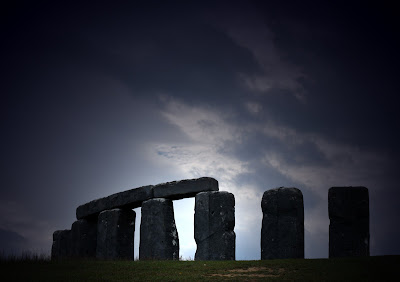 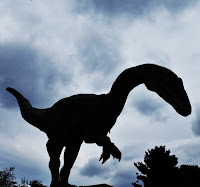 Virginia is
for wackos

Elephants, dinosaurs and Bibles, oh my!

The craziness and wonder are unmistakable along Virginia Route 11, approaching tourism-rich Natural Bridge.

On the west side of the road, there’s a menacing green dinosaur standing on a broken-open shipping crate atop an old red pickup truck. It’s a promotion for the Dinosaur Kingdom attraction a few miles further south.

But strangely, it’s sitting on the small gravel parking lot for what seems another sort of kingdom, hinted at by the Ten Commandments posted on one door of the padlocked double-gate entrance. The other door has an ironically similar message: “No Trespassing.”

Well, forgive us this little trespass – we peeked through a hole and saw a sight that would positively enrage a member of People for the Ethical Treatment of Fake Animals: Life-size replica denizens of Noah’s Ark littering the ground of the enclosed yard like so much junk. There’s a damaged elephant, a giraffe, animals as far as the eye could peek, all doubtless in need of a flood outta there.

Glancing at the giant plastic pharaohs lining the outside of the fence in this ersatz Valley of Kings, we headed off the parking lot and saw a billboard looming over the east side of Route 11 proclaiming the Dinosaur Kingdom and yet another wonder ahead – FOAMHENGE.

Little more than a mile south, there it was on a plateau up a small hill, looking very much like another “henge” we’d visited years ago in England. Not stone, but foam – a life-size rendering of Stonehenge, free for the visiting but with signs warning against vandalism.

Unlike the real thing in England, which is surrounded by a fence to keep people outside the great circle, Foamhenge (shown in wife Bonnie Schupp's photo, top, as is the roadside dinosaur in silhouette) is fully accessible. You can stand under it and pose for photos, but please don’t chip the paint or team the foam material. It’s already chipping away.

The creator of Foamhenge (and Dinosaur Kingdom, which we hadn’t the time to seek out) is Mark Cline. And after encountering Foamhenge by the chance of getting off Interstate 81 for the “blue highway” joys of Route 11, I did a Google search and found plenty about him – including a marvelous 2006 Washington Post story on his creations headlined “Jurassic Lark.”

From the story, I gather that the fenced enclosure that so Biblically mystified us is the Enchanted Castle headquarters of the artist, who had crafted critters for all manner of theme parks. So it was a shame he wasn’t around since, as fans and members of the American Visionary Art Museum, Cline is our kind of artist.

A sign at the foot of the path leading up to Foamhenge (which the Post story says was unveiled on April Fool’s Day 2004) offers comparisons between it and the English inspiration:

“Stonehenge took 1500 years to complete... using stones weighing as much as 50 tons. An estimated 600-1000 men dragged the stones from Marlborough Downs 20 miles north. Perhaps used as a temple, observatory, or tomb.

Bless you, M. Cline – it did just that! (Though I thought Stonehenge was completed a few centuries quicker.)

As it turns out, the story keeps growing – Barack Obama knocked on the guy’s door, John McCain made that encounter a big deal in the debate, the media surrounded Joe, and all the suggestions and assumptions that had arisen took on the wispy quality of smoke in a variable breeze.

So the media finds he doesn’t have a plumber’s license, isn’t about to buy the company from his boss, has a lien on his house for state tax delinquency in Ohio, and is just the kind of not-poor, not-rich white guy who would be better off with Obama as president but will vote for McCain.

Just another meaningless distraction along America’s Road to Ruin.
Coming tomorrow: The art of political postering
Posted by David Ettlin at 12:13 AM

Now if Foamhenge only had some replicas of Spinal Tap on display...