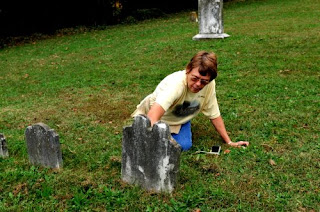 Cemetery dust-off
trumps debate for this blogger
Something you didn’t know: There’s folks who travel around the country spending their valuable free time cleaning up old tombstones.

We met two of them Wednesday in the bury patch high above historic Harpers Ferry, W.Va. – women ignoring a late run of biting flying insects to get down on their knees, gently brush dirt off and rub a length of chalk across time-weathered names and inscriptions.

Their T-shirts bore the name of their organization, Cemetery Surveys Inc., which is endeavoring to document online the names and histories gleaned from this painstaking work. The chalk makes the names and at least some of the old inscriptions a little more visible, enabling the women to record them with a digital photograph.

The Harper Cemetery had plenty of work for them, with burials dating back two centuries.

Nema Mobley (shown in Bonnie’s photo above) was one of the volunteers, a retired middle school teacher from Cherokee County, Georgia, who probably got no more appreciation from most of her students than she received from those long dust in the ground beneath her aging knees.

You can check out the organization’s Web site at http://cemeterysurveysinc.org. It has information on thousands of the documented departed, but talk about an uphill struggle – they’ve probably got millions to go before they sleep.

Other sights along the way

As I noted, the cemetery is high above the town – and climbing the many steps up the hillside was the biggest ordeal of the day aside from swatting away the gnats and biting bugs awakened by a warm October.

I hadn’t been in the streets of Harpers Ferry for 40 years, and was impressed by restoration work that has kept the nucleus of the waterfront town alive and the friendly and informative National Park Service staff.

I asked, in the old general store, about one of the items in a display case labeled as a piece of the rope used to hang John Brown – the leader of an anti-slavery band that staged the ill-fated raid for which Harpers Ferry draws its most lasting fame.

A young Park Service guide on duty there noted an old history of the event written by a resident from that era, which pointed out that if all the purported pieces of the rope sold as souvenirs were authentic, it would have been long enough to hang John Brown from the moon. (The author, it was also said, was also a bit of an Irish drunk whose accounts may have been... well, embellished is a kind word.)

After nearly four hours in Harpers Ferry, we headed south through Front Royal and along about 75 miles of Skyline Drive – which on weekends is packed with visitors gawking at views of fall foliage. There was little traffic on a Wednesday, however, but foliage at the lower elevations had not yet peaked.

Still, it was a nice drive that got us within a 150-haul of our next destination in Blacksburg, Va., and to a decent Comfort Inn at Harrisonburg well in time for the Great (Last) Debate of the presidential campaign. So, it’s on to....

Cut the crap, you Republicans. McCain got clobbered again.
For one thing, maybe I missed it somewhere, but I thought Palin had an infant with Down syndrome, and McCain kept talking about her expertise with autism. A little forgetful? I'd hope that Palin is expert in all manner of developmental disablities, particularly Down syndrome, and that she and her family do a great job in raising their newborn to achieve all that is possible.
And I hope she does it without ever having to leave Alaska.
Obama, meanwhile, missed a great opportunity when McCain told him if he were running against George Bush, Obama should have run against the president four years ago.

McCain’s comment was facetious. And Obama should have retorted: “Why didn’t you run, John?”

Speaking of John, let’s talk about Joe – the poor plumber guy from Ohio.

I don’t feel a whit sorry for Joe if he can’t get a loan to expand the business where he puts in 12-hour days of labor. Plumbers bill 100 to 200 bucks an hour, and I’m sure Old Joe is making a tidy sum off hapless homeowners like me. He's doing just fine compared to many Americans, and will get all the money he needs once the Bush administration's banking meltdown ends.
He’s Joe the Plumber in my book, not Average Joe Sixpack.
(I know, I shouldn’t have said that. Next time the toilet goes blooooey, I’m gonna pay bigtime.)

Which reminds me, it’s time to get the septic tank pumped out.

Politics has filled it to overflowing.
Posted by David Ettlin at 12:46 AM