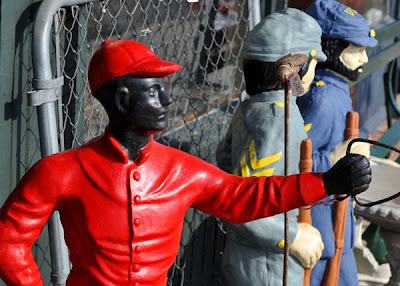 Lawn ornaments displayed outside a Tennessee antique store. (This photo, blog posting, and all pictures below, by Bonnie Schupp)

David and I have been traveling in the southern mountain areas of our country – mostly small towns in the Appalachians of West Virginia, Virginia, North Carolina, Tennessee and Kentucky. I’ve always thought them to be close to home, but this trip made me realize some big differences within my own country.

Here are the top 10 reasons I knew we were in different territory:

(1) We could guess the denomination of churches (which were abundant) before we could read the sign in front of them. Baptist! We never saw a synagogue, or even a Unitarian Universalist Church.

(2) McCain/Palin signs far outnumbered Obama/Biden signs. And McCain signs were planted on lawns in extra-large sizes. I guess something in the area provided good fertilizer for Republican signs.

(3) It was a challenge to find a National Public Radio station on the car radio. However, there was no trouble finding a religious station or a right-wing political talk show. One caller on a conservative talk show said, “It doesn’t bother me if you call me prejudiced but you can’t call me anti-American.”

(4) Drive-ins. The last drive-in restaurant I noticed must have been

decades ago. When I saw the first one in North Carolina, I asked David to stop the car so I could take pictures of this retro scene. Little did I realize that it wasn’t so unusual in this area. We passed quite a few drive-in restaurants and drive-in movies in two weeks. For those of you who are too young to remember, drive-in restaurants had pull-in places for rows of cars, each spot with a menu and a speaker for ordering. When the order was ready, a waitress would bring it out to your car. Drive-in movies had places for each car with a speaker that attached to your car window. It didn’t matter, though. People (usually teens) in the cars were making out.

(5) American flags flew in many places next to the Confederate flag. If you missed it, read David’s blog posting about his conversation with Sons of Confederate Veterans members. http://ettlin.blogspot.com/2008/10/road-report-part-12-confederate.html

(6) The Ten Commandments (the first 'Top 10' list?) are prominently displayed on a large plaque next to the entrance doors of the county courthouse in Jonesborough, Tennessee. 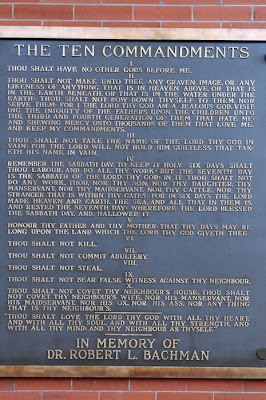 (7) Frequent religious road signs and billboards such as, “After death what?” Or a billboard, “God please send us someone to cure Aids, cancer and all these awful diseases. - I did but you aborted them. – God.” (But David especially liked the simple roadside sign declaring, “God Bless You Enormously.”) In-your-face religion seeps into even casual encounters in restaurants.

See David’s blog about such a conversation in a low-end Chinese restaurant. http://ettlin.blogspot.com/2008/10/road-report-part-10-amazing-turns.html

(8) Assumptions that all white people think alike. In this area, strangers often think that if you look like them, you think like them. It reminds me of the time I first drove south and stopped in a restaurant in Georgia. A man with a strong southern drawl began bragging about the smart German shepherd he had... how his dog could tell the difference between white people and “colored.” And how his dog hated colored people. How he had to hold his smart dog back so he wouldn’t attack “them colored people.” He looked in my direction for affirmation that his dog was a really smart one. You would think that we’ve come a long way since the 1960’s, but David wrote in a recent road trip blog about an 81-year-old Georgia man we met at Davy Crockett’s birthplace – a man, living in the past, whose bigoted feelings about Barack Obama began with how he would “never vote for a black Muslim.” And that was about the nicest thing he had to say about the prospect of an African-American in the White House. http://ettlin.blogspot.com/2008/10/road-report-part-8-presidential-visit.html

(9) The absence of black faces. African-Americans seemed few and far between as we visited scenic areas, national parks, hotels and restaurants. We did find two, however, at Cumberland Gap National Historic Park, at a re-enactment event. They were playing roles of former slaves. Excellent, passionate acting. 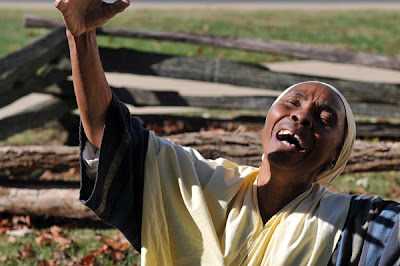 David wrote about a conversation with one in a recent blog. http://ettlin.blogspot.com/2008/10/road-report-part-13-meeting-mr-lincoln.html

(10) Bathroom stall graffiti. In-your-face jingoism and proselytizing permeated our trip daily. While sitting on a toilet seat, I read this (picture) : “Dear God, Why is there so much violence in school? Signed – a concerned student.” “Dear Student, I’m not allowed in school. – God” 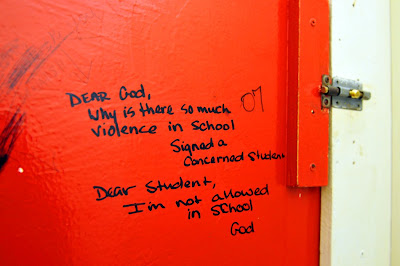 After our recent travels, I better understand Sarah Palin’s comment, “The election is in God’s hands.” But, as David observed, God isn’t registered to vote.

A former Tennessean/Floridian here. You nailed it, Bonnie!

I'm a little confused, are you saying that the 10 commandments and Baptist churches are a bad thing or just that you don't see them where you live?

Very witty and enjoyable post! I especially love the excerpt about the billboards and road signs. I can't wait to see more photos from your travels!

I enjoyed reading this, Bonnie. A road-blog!

Hi Bonnie--
Great posting. Your observations remind me of John Steinbeck's book,TRAVELS WITH CHARLIE, which chronicles his road trip with his dog. His section on travels through the south is laden with disbelief that so many people in the south can immediately open conversations with a racial slur. My wife complains about people immediately asking, "Where do you go to church?"

I remember that orange picture. It was in a bathroom of Sweetwater Flea Market in TN. I been there, seen it there.

Chamberly -- you are exactly right.