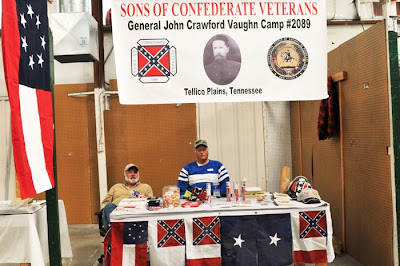 In Tennessee,
Old Times Not Forgotten,
Particularly if it’s the Civil War

Call me crazy – and maybe inspired.

Why else would I walk up to the Sweetwater, Tenn., weekend flea market booth of The Sons of Confederate Veterans and ask: “Anybody here voting for Obama?”

Considering that introduction, and the Obama picture button pinned to my shirt pocket, Commander Young and I embarked on a very civil conversation in which we agreed on just one thing: We love our country.

Oh. Two things. George W. Bush has done a terrible job as president.
Oh. Three things. John McCain is too old to be the Republican nominee in this election – although Young and his companion manning flea market Booth No. 391, Sons’ camp Adjutant-Treasurer James “Hawk” Hawkins, said they will be voting for McCain.

“What choice do we have?” Young said.

They were selling a variety of merchandise at the booth – bumper stickers, replica Confederate currency and coins, and the item I bought for a dollar: a booklet explaining the flag associated with the South and the Civil War, which raises a ruckus anytime it is flown over a public building.
Proceeds from the flea market booth support the cause of resetting Confederate soldiers’ tombstones, Young said.

Speaking of the Civil War, Commander Young and I also agreed that Gen. Robert E. Lee was a great man and general – but he would not come around to my view that Lee chose the wrong side.

As far as Young was concerned, the conflict – still the deadliest in United States history – was “Lincoln’s war.”

And that harked to the 1960s for me, when folks thought that way about Vietnam and President Lyndon B. Johnson. As a young reporter then, I was assigned to write a story on Johnson’s son-in-law Charles Robb, then a Marine Corps officer, making a recruiting visit at the University of Baltimore.

“How do you feel about people calling this your father-in-law’s war?” I asked the future United States senator. He replied that it was America’s war.

Lincoln’s war? I don’t see the war between the states that way. (Although I see Iraq as Bush’s and Cheney’s war – a conflict that should never have become America’s quagmire.)

Young also took issue with another U.S. war – the one waged against Native Americans, who were slaughtered and forced from their lands. And that makes sense, since he claims ancestry that is mostly Cherokee with a mix of German-Irish. And on the matter of how America’s Indians were robbed and murdered, he and I also found agreement.

Amazing when you talk to people in a civil, respectful fashion, you can find common ground in the unlikeliest of places.

As for the flea market, where a purported 800 vendors seemed mostly to be selling knives and stuff that nobody really needs, we made one other purchase: a large U.S. flag for $3.

There are Democrats in Tennessee

A little earlier in the afternoon, we stopped in the tiny town of Loudon in Bonnie’s quest of photographic subjects for a travel magazine. There wasn’t much – the depressed town only recently received a grant of $2 million to boost a renewal of its ghostly downtown that is just underway.

But it had a Democratic headquarters, up a tall wooden stairway around the corner from a closed ice cream parlor. The side wall of the building was decorated with an assortment of Obama posters facing passing traffic along Route 11 through town.

Presiding over the office was artist Tom Roberts, a Knoxville native who lived up north for awhile but has resettled in Loudon and invested in real estate. He owns that building where he is turning the Obama office space into a residence (with a beautiful century-old wooden-plank floor).

“It’s a pleasure to own this building and put up all these Obama signs – a beacon in a Sea of Red, said Roberts, who estimated area voter registration as 80 percent Republican.

I’d been wearing Bonnie’s Obama button since the beginning of our trip almost two weeks ago, so we bought three more buttons to update our political wardrobe.

Roberts led us on a walking tour of the town, including its oldest building – once owned by a Cherokee Indian who operated a general store until being forced out on the grounds that Native Americans were not allowed to own real estate.

As we headed back to the car, Roberts pointed out his favorite sign on his building. It reads:

Hi David--I see that your visit to Sweetwater unearthed some of Tennessee's more interesting negative cultural relics: absolute crap sold in flea-markets and the pathological clinging to a symbol more desperate than religion and guns--the confederate flag. Also, don't forget that the Ku Klux Klan was originally organized in Tennessee. Your blog posting provokes a question my wife and I keep asking ourselves: "What the hell are we doing here?"

P.S.--I forgot to mention that I grew up in Knoxville, Tennessee and am not a "transplanted northerner" (my wife is). I would hate to be branded "a northern elite."

"Barack Obama has been married to the same woman for thirty years, he's a family value man."


Maybe McCain will have trophy wife no. 3 respond?

*Trophy wife #3 is actually a lobbyist.

The first time I saw Ralph Stanley play was about 20 years ago in a field in Wytheville, Va., where I-81 and I-77 intersect. He's from the Virginia hills not far from Tennessee and has held local office.

I wish I'd picked up this campaign paraphernalia that day: "Ralph Stanley for Governor." It's interesting that he's supporting Obama. There was a time that western Virginia Democrats wouldn't have.

Hi David -- I came over here from The Sideshow and I want to thank you for engaging these men in conversation and taking time to find the little bit of common ground between you. A better way to persuade than demonizing and name-calling.

That's a very nice comment, Sherry, and very instructive. I owe an apology to the men that I "demonized" in my judgmental web posting. In educating people about the Confederate Flag, they are doing something positive and thoughtful regarding their heritage. I sound alot like the people who I criticize the most.

@robertstennessee, given reports today of white supremecists and their fantasies of rampage --

-- I'd have to admit that these guys might be pretty much deserving of demonization.

Nevertheless, I stick by my point.

Sherry--I shared David's blog posting about the Tellico Plains Sons of the Confederates with the afternoon volunteer here at the Loudon Democratic Office...(We'll call him Joe, the former mayor). His immediate response was, "Black folks aren't allowed in Tellico Plains." I asked him how that could possibly be enforced. He said that they could be shot at. Maybe that's heresay and an exaggeration, I don't know. But, I do know how chilling it can be for African-Americans to be in mountainous areas of East Tennessee where front porches are draped with the Confederate Flag. I have had plenty of friendly conversations with white supremists and confederate holdouts here in east Tennessee. But I'm not African-American. And if David were African-American, he may not have conducted a cordial interview with the Sons of the Confederacy.
I don't want to demonize anyone, positioning myself as having superior beliefs; however, I want to defend and advocate racial tolerance and equality. How can these two principles be reconciled while confronting entrenched racism?