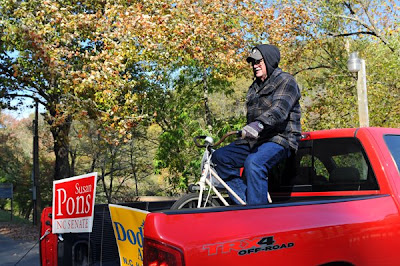 Detours can turn up
some crazy encounters

Often for us, the best moments on a road trip are unplanned – and so it was yesterday when we turned a corner in Bryson City, North Carolina, and discovered 72-year-old sexologist Richard Allison pedaling an exercise bike in the bed of a red pickup truck.

Bet that got your attention, too.

It was, in fact, a crazy day from start to finish – also featuring the formerly drug-addicted counter woman at a two-bit Chinese restaurant grappling with religious concerns, and a vision of beauty in a sunless sunset at the top of the Smokies.

And who would have guessed that Abraham Lincoln might have been a real bastard?

We’ll take it from the start, as we changed direction leaving Cherokee after a night in a Sleep Inn (a chain that moves well south on our list of future choices), and headed away from Great Smoky Mountains National Park so Bonnie could check out photographic possibilities in the town of Murphy for a travel magazine.

The route took us through Bryson City, where Dr. Allison (doctorate in psychology, specializing in sexology, earned at age 70) was pedaling away at a strategically well-traveled intersection while reading a copy of the Smoky Mountain Times in his Dodge Ram 4X4 pickup displaying campaign placards for three local Republican candidates.

We did a double-take passing by, and turned around 100 yards down the road to check him out. And we found that Allison is a Democrat and can’t even vote in North Carolina because of his registration at his other home in Vero Beach, Fla. He just happens to like the folks he was promoting – John Odom for insurance commissioner, Susan Pons for state Senate and Dodie Allen for the House.

“We need more estrogen in the legislature,” Allison said of the women.

And he knows a bit about estrogen. A former elementary school teacher who developed a business in Florida called the Reading Skills and Counseling Center, Allison said his psychologist wife’s work in sexology got him to exploring the field and pursue his doctorate – and enjoying the opportunity to “go to class and talk about sex for six hours.”

“We’re made up of a lot of hormones – men and women hormones,” Allison said.

Well, enough about sex already. I wanted to know about his politics – particularly his leanings in the presidential race. He managed a delicate strip-tease of a dance in avoiding a full-frontal answer, allowing only that he had cast a write-in vote in the Florida primary for New York Mayor Michael Bloomberg.

“Obama would be good – if he turned out to be like Kennedy - in bringing people black and white together. I really believe he could be part of a healing process.... I just hope that this will be a healing process for the United States.”

Somebody call Oprah – gotta turn this Allison fella into the Dr. Phil of politics.

We stopped at a roadside rest area, where I did a double-take at a car with a Texas license tag and an Obama sticker in the window. I confronted the 60-something driver as he stepped out, pointed out the contradiction of tag and sticker and asked: “Fleeing Republican country?”

Palin country, huh? And this guy wearing an Obama T-shirt on a cool, barely 60-degree day.

Yeah, I thought, and if Palin wins it’ll be a very long night for the liberal soul.

Arriving about 1:50 p.m. in Murphy, we saw a $4.95 Chinese buffet sign near the end of a declining strip of retail stores and decided it would make for a quick lunch stop.

As we sat in a window booth in the tiny restaurant, the young lady behind the counter spoke up, telling us about the two preachers who had been in for lunch shortly before us, and how one of them wanted to cast out a couple from the church because “they were not saved.”

She was greatly bothered by this, questioning how a preacher would want to ban people from the church rather than offer them his religious help and counsel, and rambled on about what happens after you die, and whether there is a heaven and a hell, and what they say heaven is like, and how there’s a room for you and a better place.

She told us she was a mother of five, had come to the area from Texas 10 years ago to help her parents, and how she got into trouble with drugs and only recently managed to overcome addiction with the help of her church and religious beliefs, how she had been hired by the restaurant owner just three weeks earlier (“There are no jobs in this town!”), and how it was her 31st birthday, and she loved watching horror movies.

“You’re from Maryland? Do you know where that movie was filmed?” she asked.

“You mean ‘The Blair Witch Project?”

“Burkittsville. We’ve been there. It’s a pretty little town.”

Then her husband and a friend stopped by, and the boss arrived so she could leave – her lunch shift ended. I offered her a little advice, to try her best to make herself happy and how that would spill over and help others find happiness. A nice thought, given her relatively bleak life and worries pitting the here-and-now against the hereafter.

She was gone before we got her name.

“You know,” I told Bonnie, “we just met the most ordinary woman on the planet.”

As we were leaving, I told the owner that she was a very nice employee and doubtless would work very hard there. And I thanked him for her presence.

It just wasn’t the kind of place where such things are commonly said. But maybe tomorrow, he’ll see her, remember the words and give her a warm smile.

Memorable Murphy and the Lincoln Myth

The town of Bonnie’s photographic endeavor has a lovely courthouse, with a decorative eagle mounted above the blowing U.S. and North Carolina flags on its soaring rooftop. (The eagle blew off during a deadly 1974 tornado, and was found bent and with bullet holes long after and miles away. This year, the restored bird and the flags were restored to the lofty perch.)

In history, Murphy was a way station for the region’s native Cherokee Indians on their deadly “Trail of Tears” forced march into Oklahoma exile. Some of that unfortunate history is told in the town’s county historical society building just down from the courthouse. It also had some excellent displays including a log cabin constructed of logs from a dismantled early 19th century cabin, an old-fashioned classroom with authentic old desks and other furnishngs, and huge cases with hundreds of children’s dolls dating from more than a century ago to the more modern likes of Princess Di and Dolly Parton.

Across the street was a cemetery chapel donated to a local church well over a century ago by a chap named Harshaw, for whom it is named – and whose walled family plot outside was badly in need of some yard work.

A typed sheet of paper taped inside a window listed a few of the notables resting in the graves, including Abram Enloe – by one account the father of Abraham Lincoln.

Seems that Nancy Hanks was a house servant to the Enloe family and managed to get pregnant. This very much annoyed Mrs. Enloe, who wanted poor Nancy gone. And the story continues that Abram Enloe may have paid Thomas Lincoln to marry her.

The newlyweds then moved away, presumably to Kentucky where Abraham Lincoln was born.

And this is all recounted in the window of a chapel, the narrative concluding: “This has been disputed by many but proven false by none.”

So we bought half a pound of fudge at a corner candy shop and fled.

The side trip to Murphy delayed our planning crossing of the parkway through Great Smoky Mountains National Park until very late afternoon, as clouds began to take over the sky. We had to drive all the way back to Cherokee, and stopped at a few overlook sites along the parkway before turning onto a seven-mile dead-end road up to Clingmans Dome.

It was also likely the coldest spot in Tennessee or North Carolina at the moment of our arrival – a breezy 41 degrees that was being braved by a good dozen other photographers including a trio who mostly spoke Chinese. (One of them has been in the U.S. for a decade, having had jobs as a sushi chef and delivery man, and lives in Atlanta – and brought his visiting son and a friend to a spot he visits every year to see the autumn spectacle).

They were shooting pictures, as were Bonnie and a line of other photographers waiting on an appearance by a reluctant sun whose presence was only hinted at by brighter patches behind the clouds.
Still, it was beautiful there – the hazy mountain peaks stretched out in panorama, the colors muted by the waning light. And just as Bonnie began packing away the camera and tripod, and my new Chinese friend was walking toward his car, the clouds exploded into a brilliant pink.

It was a stunning sunless sunset.
I wish we could have shared it with our restaurant lass. It was just heavenly.

Good stuff, Dave. Reminds me of living in Bristol, on the Va.-Tenn. border, and many trips to the Asheville, N.C., area. I'm sure that you and Bonnie are adding a glow beyond the light on the trees there before dusk at this time of year.