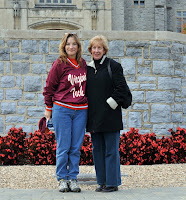 A semicircle of 'Hokie Stones' is heart of memorial at Virginia Tech. Other image shows Barbara Lockee (left) of VT and Rhonda Robinson of Northern Illinois University. (photos by Bonnie Schupp)

You can’t visit Virginia Tech without noting what happened here on the leafy Blacksburg, Va., campus some 18 months ago.

Virginia Tech was host school to this weekend’s annual conference of the International Visual Literacy Association, which included an exhibit Saturday on a project in its early stages of development aimed at bringing together VT and Northern Illinois University in their common bond of grief and recovery from mass killings.

On April 16, 2007, a deranged student killed 32 people and wounded a reported 17 others on the Blacksburg campus in two separate attacks before taking his own life. It was the deadliest mass murder in United States history.

It was followed on Feb. 14 of this year by a mass shooting by a former student at Northern Illinois University who killed five and wounded 18 others in a large lecture hall on the DeKalb campus and then committed suicide.

I guess you can’t define two such incidents, coming 10 months apart, as a pattern. Yet they are part of a troubling history in a nation where violence is a daily reality, and multiple killings are not uncommon. We are inundated with violence, in both the news and what is termed entertainment.

How to cope, how to assuage the grief, to embark on a path toward healing are at the root of the project shown in a formative stage Saturday by faculty members Rhonda Robinson of Northern Illinois and Barbara Lockee of Virginia Tech. They titled the presentation – photos of the grieving, memorial displays and expressions of caring – “Symbols of Hope: Huskie and Hokie Visions of Recovery.”

With photographs taken on both campuses in the days and weeks after the killings, the effort builds a bridge of empathy between schools 700 miles apart but drawn close in spirit by the horrors they suffered.

Robinson and Lockee said they plan to seek contributions of images from their university communities that will enlarge the scope of the project, whose final form is yet undetermined.

Lockee led a walking tour from the conference center to Virginia Tech’s eloquent April 16 Memorial – a semicircle of 32 “Hokie Stones” (the type of stone incorporated in buildings across the sprawling campus), each engraved with the name of a victim of the massacre. It is modeled on an impromptu memorial of stones assembled by a student volunteer group hours after the shootings.

As we arrived, other visitors were placing fresh flowers across the name on each stone.

There’s a brochure explaining the memorial, with photos and short biographies of the 32 victims in the same order they appear, from left to right, in the procession of stones.

Walking along the path, you inevitably take a deep breath at the stunning reality: “There’s so many of them.”

But there were 33 dead, and one remains missing: The killer.

Perhaps that’s because he may be the hardest to forget.

Nearby, tucked around the corner of the administration building, is Norris Hall, where the bulk of the killings occurred in second-floor classrooms. While there was some thought to demolishing it, Lockee said much work would have been lost because of equipment installed in first-floor laboratories that could not be moved.

Instead, walls are coming down on the second floor to create space for a new Center for Nonviolence and Peace Studies. It is to be directed, Lockee said, by Jerzy Nowak, the horticulture professor and department chair whose wife, French professor Jocelyne Couture-Nowak, was killed in Room 211 along with 11 of her students.

The ‘Visions of Recovery’ exhibit was paired with a display by Lucinda Willis of “healing quilts” – family heirlooms and her own, each laced with deep meaning.

In a summary of her exhibit, “Healing Quilts: A Visual Display of Emotions and Strength,” Willis explained: “Healing quilts have, for generations, been a way for women to express themselves when recovering from a devastating episode in life. Various forms of healing quilts have been created over the centuries, and even today, quilts are made which gently show strength and determination in the face of adversity.”

Many have seen quilts memorializing victims of disease, war or violence. The display of five quilts brought to the conference by Willis, of Indiana University of Pennsylvania, included one that, according to the story handed down with it across generations, was hastily made with available scrap fabric by a mother to keep her son safe and warm as he went off to war as a Confederate soldier. It and he survived.

Of the designs that emerge, Willis wrote on a display card, “Healing quilts don’t get planned, they evolve, and with each stitch, some comfort is gained.”
Posted by David Ettlin at 2:43 AM