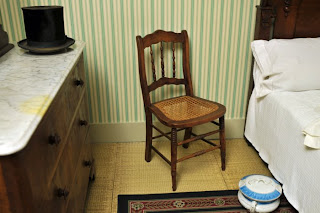 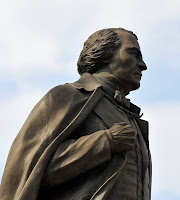 The 17th president (left), and his bedroom with hat and chamber pot. (Photos by Bonnie Schupp)
Turns out that Andrew Johnson
wasn’t as bad as they say

The nation was in a deepening crisis, and the leading candidate for the presidency was an Illinois legislator with just a few years of experience on Capitol Hill.

Nope, his name wasn’t Barack. We’re talking about Abraham Lincoln, a former Whig who won the Republican Party nomination and went on to become, many say, the best president in history.

That’s the easy part. Now shout out the name of his running mate.

It took a three-hour visit on Tuesday to the Andrew Johnson home and historical site in Greeneville, Tennessee, to return to those thrilling days of nasty yester-year politics. And no, his running mate was not Andrew Johnson – not in 1860.

It was Lincoln’s run for reelection in 1864 when Vice President Hannibal Hamlin was dumped in favor of southern Democrat Johnson, a U.S. senator and appointed federal military governor of Tennessee who was one of the most admired men in the still-divided nation.

He was ill and nervous, and had a few too many drinks (ostensibly served to him by Hamlin) before taking the oath in the Senate chamber and giving a rambling, incoherent speech. Then Lincoln took his oath outside, delivered his famed “With malice toward none...” speech – and five weeks later, mere days after the Civil War had ended, was dead from an assassin’s bullet.

So the “drunken tailor” from Tennessee, as some called him, took another oath and became the nation’s 17th president.

History should have been that interesting back in junior high and high school – or maybe it was, and I just wasn’t paying attention.

Any similarities between then and now, well – history tends to be repetitious, and has its ironies.

Andrew Johnson grew up poorer than Barack Obama, and had a lot in common with slaves after his widowed mother apprenticed him to a tailor as a young teen-ager in his native Raleigh, N.C. Forget about child labor laws – Johnson was indentured for seven years, and became a fugitive when he ran away to Tennessee without completing his servitude.

Yet he became a slave-owner himself, even buying two half-sibling black children, after becoming a successful tailor in Greeneville. Self-educated with help from his wife, Johnson became deeply involved in local politics and won election to a succession of offices including the U.S. Senate.

After Lincoln sent him back to Tennessee as military governor following the union army’s capture of Nashville, Johnson decided to declare an end to slavery there – but first set an example by emancipating his own longtime household slaves.

He was a man of principle, and in the end that was what sullied his reputation because of unyielding defense of the U.S. Constitution in the face of post-war disputes with Congress and eventual impeachment for refusing to recognize a law enacted over his veto. He survived the Senate trial by a margin of a single vote of not guilty – and was the only president to be impeached until Bill Clinton “didn’t have sex with that woman.”

How complicated could a nation’s politics get? The strict-constructionist Johnson fought moves by the post-war Congress to help the freed slaves and deal harshly with those who had joined the Rebellion – not that he did not want to help the nation’s large black population, but he felt strongly about state rights and healing the wounds of war.

Unable or unwilling to seek compromise, Johnson became a failed president – likely in the lower 20 percent of all who have held the nation’s highest office.

During our memorable tour of Johnson’s two surviving homes and tailor shop in downtown Greeneville, our National Park Service guide Daniel Luther allowed as how Johnson would have been looked on with far greater admiration in history had he not become president. “But then, we wouldn’t be here on this tour,” he added. “People don’t generally visit the homes of the vice presidents.”

Our guide also noted that Johnson’s first speech after being succeeded as president by Ulysses S. Grant was made in Baltimore, where he declared: “My deliverance from office is the greatest case of emancipation since the Rebellion.”

Much of Johnson’s history and possessions in Greeneville are preserved. On the tour of his post-presidency home, you touch and hold the same banister as he did going up the stairs. The side-by-side portraits of Lincoln and himself that he treasured still hang above the mantel. His nightshirt lays across his bed. On the floor sits his empty chamber pot, and on the dresser rests his black top hat.

You can buy a replica of the hat in the Visitor Center gift shop for 12 bucks. The label says “Made in China.”

In the film there, the words of Andrew Johnson are spoken by an eerily familiar voice – that of Fred Thompson, the Tennessee actor-turned-U.S. senator and wannabe Republican president. Fortunately, playing stand-in for Andrew Johnson was as close as he would come.

King of the Wild Frontier

Driving north out of Greeneville along Route 11E, we are detoured by a roadside sign indicating that just 1.9 miles away is Davy Crockett Birthplace State Park.

Growing up as an adoring fan of the Disney-made Fess Parker-portrayed life of the early 1800s Tennessee frontiersman, congressman and eventual Alamo martyr, I just had to check it out.

I started whistling the theme song, ‘Born on a mountaintop in Tennessee, the greenest state in the land of the free, raised in the woods so’s he knew ev’ry tree, killt him a b’ar when he was only three, Davy, Davy Crockett, king of the wild frontier.”

At the visitor center, a TV was showing a biographical video interspersed with scenes from Fess Parker’s series and John Wayne’s movie “Alamo.” You could buy a tacky Davy Crockett park T-shirt for $10, but the only coonskin cap (as worn by the Fess Parker version of Davy) was part of a display and not for sale.

For one thing, Crockett probably didn’t wear one himself.

And the park literature readily acknowledges the obvious when you look around the topography: He wasn’t born on no mountaintop.

So what did we gain by the little roadside diversion? We met a Georgia cracker – a crazed 81-year-old Republican veteran of World War II whose attitudes seemed straight out of the Ku Klux Klan.

Well, I didn’t know he was crazed right away. He seemed normal enough visiting the re-created Davy Crockett log cabin with his wife, daughter, and two sweet young grandchildren, and told me how he was from Georgia, he’d been there once before, 40 years ago, when the way in was a dirt road, the original cabin was still stood there, and the only amenity was a small refreshment stand.

I was curious about his politics, asking what he thought about the presidential election, and in an inspirational act to see how he’d react, opened up my Orioles jacket to reveal my Obama button.

Talk about an explosion of mouth. The short version is that he is less than happy about that black Muslim trying to become president. It got rougher, but I won’t go there. And he was gone a minute later, heading back to the car with his otherwise idyllic family.

There was an amused witness: A retired New York social worker and Vietnam vet, like us on a meandering drive in search of America. He winked and flashed his own Obama button.

Can’t help but wonder what Disney will make of Obama someday. Hope there’ll be a nice song to whistle, and a happier ending.

Tomorrow: A visit to the storytelling capital
Posted by David Ettlin at 2:24 AM