Emails, we get emails

Almost faster than speed of light,
stuff multiplies across the Web

Amazing how fast the fun stuff spreads through the Internet. My friend Frank Bittner emailed one such bit of hilarity over the weekend, preceded by this introduction: “From a cousin in Ohio, I found this complemented my Saturday AM coffee and donut, hope you'll enjoy .. .. .. also. Thankfully the insanity will be over soon .. .. hopefully!”

What followed was a letter “to the Red States” saying that the Blue States were leaving. I won’t blatantly copy it into this blog, although it is easy to find – just Google search “Blue States Leaving Email” and you’ll find half a dozen or more very recent blogs spreading it.

OK, I can’t resist. here’s a tidbit from what appears to have been “written” by California to the Reds:

We've decided we're leaving. We intend to form our own country, and we're taking the other Blue States with us.

In case you aren't aware, that includes Hawaii, Oregon, Washington, Minnesota, Wisconsin, Michigan, Illinois and all the Northeast. We believe this split will be beneficial to the nation, and especially to the people of the new country of New California.

To sum up briefly: You get Texas, Oklahoma and all the slave states. We get stem cell research and the best beaches. We get Elliot Spitzer. You get Ken Lay.

We get the Statue of Liberty. You get Dollywood. We get Intel and Microsoft. You get WorldCom. We get Harvard. You get Ole' Miss. We get 85 percent of America's venture capital and entrepreneurs. You get Alabama.

It goes on, some lines funnier, others more heavy-handed, but you get the idea.

You wonder sometimes what genius starts these email balls rolling, with maybe a little push down the Cyberhill, and sits back smiling as thousands of people get the message in days, if not hours.

My friend Frank forwarded his gift to 26 people, according to my quick tally of his open addressing. Probably a few will forward it to their friends. And the multiplication across the Internet likely assures the “letter” a strange but anonymous literary immortality.

At least when he sends me a “forward” it’s usually worth reading. But for all those folks who seem to spend endless hours forwarding everything, please... don’t! Just the good ones. The really, really good ones! (Like the 15-second hotdog commercial my brother sent today... nice one, Larry.)

More about the jocks

While we’re on the subject of emails, and I’m buying time until Election Day with my well of originality temporarily running on fumes, I have to share this response from Steve Riddle (see Friday's blog on the shepherd facing a layoff from the State of Illinois) to Bonnie’s photo of the

lawn jockey trio outside a Tennessee antique store – the traditional black one, along with Confederate and Union soldier lawn jocks.

“Say, I was looking over your blog and noticed the entry made by Bonnie, (part 14) of the black riding jockey close up. Odd, that he was next to Civil War statues, but I wonder if you knew the story behind Jocko?”

He attached this link, which I found fascinating: http://www.mountainhomeplace.com/jocko.htm.

Here’s a teaser, to make sure you check it out:

Jocko or the Lawn Jockey is seen in the South and in the Appalachians of the United States.
Many have been destroyed because of the thinking that they are a racial slur to African-Americans. But is this true?

The River Road African American Museum in Louisiana tells us that lawn jockeys represent nothing of the sort, rather they show us a proud moment in U.S. history.

Now you just have to click on the link. Don’t worry. It’s not long... just fascinating.

Maybe it’s even true! (You can also readily find rebuttals to this account, including an evenly-written Wikipedia narrative on the subject.)

Friday's “teaser” to the next blog promised a trip to Great Falls of the Potomac. Well, we did it. Me, Bonnie, another couple and their young daughter. It was a beautiful day to be outdoors, sunny and 70, with the leaves turning – although not as brilliantly as one might expect for the first day of November in this region.

I have nothing incisive to say about it, however. Just that sometimes you have to get outside and suck in some beauty. Here’s what it looked like along the C&O Canal in Bonnie’s viewfinder: 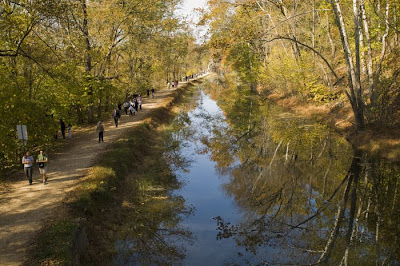 Coming attractions: More amazing commentary from my readers, and who knows, I might even vote. You should, too. See you at the polls on Tuesday!