Word clouds give new look
to McCain, Obama speeches
But they're not up in the air
Think of these political speeches as art: Barack Obama's victory, John McCain's concession. But they're not so much for listening as seeing -- as "word clouds."
What in the world is a “word cloud,” you ask? Well, if you go to http://www.wordle.net/, you will read that “Wordle is a toy for generating 'word clouds' from text that you provide. The clouds give greater prominence to words that appear more frequently in the source text. You can tweak your clouds with different fonts, layouts, and color schemes.” 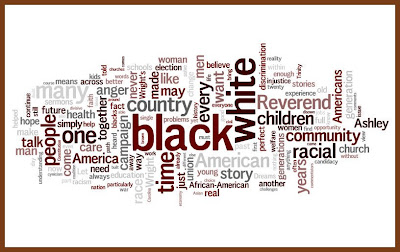 And here is a word cloud created from Senator McCain’s concession speech. 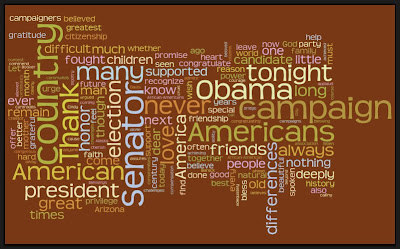 The text for this speech can be found here:
http://ap.google.com/article/ALeqM5hmJfimrZW3jBur_BmaFtqj7mfFgQD948JFJG5

And then I was curious about how David’s blog post, the letter to Barack Obama, would form as a word cloud. Here it is: 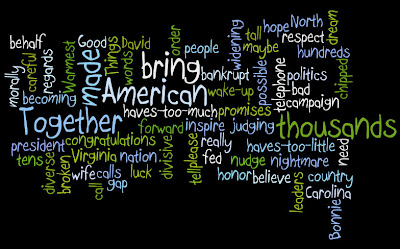 After I created these, I discovered that I wasn’t the only person to do this type of political art. A blogger created word clouds from the vice-presidential debate transcript (again, using Wordle). You can see the word clouds of Joe Biden and Sarah Palin’s here:

You can draw your own conclusions. Or you can go to http://www.wordle.net/ and "draw" your own -- having fun with whatever text you want to "cloud."

These are so neat!

i love this! i want to do it with my divorce papers.