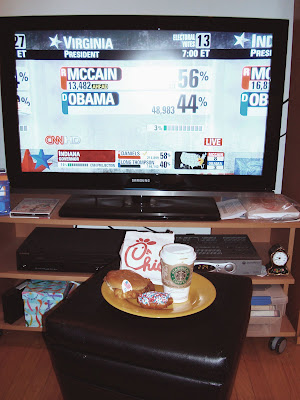 But free gasoline would have been nice


There had to be some payoff for getting up at 6 a.m. to cast a ballot before work – something besides that great satisfaction of voting.

And by the time I left the office about 6 p.m., the returns were coming in: Ben and Jerry’s, Krispy Kreme, Chick-Fil-A and Starbucks.

The trick was running the table, making a clean sweep on the way home without going much out of my way. The problem was dessert came first, so I walked two blocks over to the ice cream shop at Baltimore’s Harborplace, where just six other people were in line with the same idea.

I got a cup of Cherry Garcia, and walked three blocks to the garage to get the car, a slow stroll, a spoonful at a time. I’d finished by the time I reached the automated pay machine and tossed the cup in the trash.

Driving south, I reached the Krispy Kreme on Ritchie Highway in Glen Burnie about 20 minutes later and ran into the first snag: A hand-written note on the locked door that read “Sorry Sold Out.”

But there were three women working inside, a dozen full trays of donuts in the display case, and a rumor that they were reopening at 6:30. But the sign didn’t say that, so I used my cell phone to call the corporate 800-number which a more permanent sign in the window suggested for reaching customer service.

The woman who took the call responded to my query by dialing the store, and I watched one of the trio inside answer. A few minutes passed, and customer service was back on the line with assurances that the donuts were almost ready – the free donuts, shaped like stars with red, white and blue sprinkles on top.

The problem, I was told, was that the special freebie donuts that had been delivered to the store were all gone, so the employees had to set up a new batch themselves. And at 6:32 p.m., one of them unlocked the door for the half-dozen folks who had been waiting under the building’s overhang or in the cars to keep out of a drizzly rain.

Donut secured, it was off to Marley Station Mall another three miles to the south, where I remembered a Chick-Fil-A restaurant. There, the clerk asked for my “I VOTED” sticker in exchange for the free chicken sandwich.

I protested, because I hadn’t yet been to Starbucks and thought I might need it. So I tore it almost in half, and handed over the 40-percent side – which proved a reasonable accommodation since I got the freebie.

Back to the car, and about a half-mile away at the Southdale shopping center, was the Starbucks. The clerk laughed at my tale of the sticker and said, “It didn’t matter. We operate on the honor system here.”

Another counter clerk handed over a medium-size cup of hot coffee. I picked up a couple of Splenda packs, poured in a little milk (the half-and-half container appeared to be empty), and headed east toward home for the last stop.

No, it wasn’t for a freebie – but that would have been nice.

I wanted a tank of gasoline.

But I got the next-best thing: A fill-up of regular at the near-bottom price of $2.12.9 a gallon.

As a believer in the conspiracy theory when it comes to national elections and gasoline prices, I knew in my heart it would be going up – if not tomorrow, real soon.

And just about now, down the road at the school where I’d voted minutes after 7 a.m., the polls are closing on a bit of history that I am proud to have been part of – with or without the full tummy and full tank.
Posted by David Ettlin at 8:02 PM

I assigned my class an Election Day story and several attempted something along these lines. I am going to send them this so they can compare with what they did. No, right, I'll refer them to your blog so that the number of hits goes up. You're welcome, David.