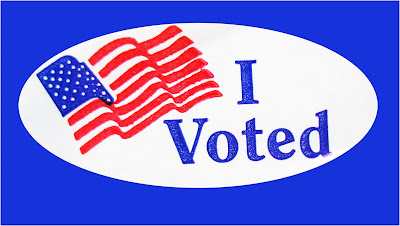 Early voting in Maryland
means getting up early

Turning into the long drive toward my precinct's polling place at Chesapeake Bay Middle School near dawn, you had to wonder if it was Election Day: Just two ground-level signs were in place, one of them opposing passage of a constitutional amendment on slot machine gambling, the other for costume sales at a local party store.

Halloween was over, but the election in fact was in full swing – minus the usual crush of signs and the bustle of electioneering. There were plenty of voters, more than 60 of them lined up by the time the polling place opened for business at 7 a.m., and a steady flow of more arriving.

“I’m one of the 33 percent of voters in this state whose vote doesn’t count,” said Jerry Zazzera, referring to Maryland's Republican minority and waiting with his wife, Angie, to cast ballots and get the election over with. Unlike most of the early-risers, they were not heading right off to work afterward, but to a vacation.

“We want to relax now,” Angie said after they had voted, a CD at the ready in their SUV, in place of the political talk shows for a while.

“Our intention is not to listen to any of this throughout the day,” Jerry said.

Not that he was ready to abandon political talk entirely – first sharing his conservative-leaning views including that the Republican Party “empowers people to get out there and be anything they want to be,” while the Democrats, with “this whole redistribution thing” on wealth, “you take the spirit out of people for wanting to succeed.”

“Freedom is so precious to me – I served 11 years in the service,” he continued. “I feel Obama will castrate the military.”

On the Iraq war? “My view on Iraq is we have planted a seed that people in surrounding countries can see.”

There were probably a few Democrat-leaning voters in the growing line, but finding them became impossible when my interviewing was halted by the polling place’s chief election judge as improper on the premises (not that I was telling people whom to vote for), and who wanted to know who I was – and when he found that I was a blogger, declared, “Then you have no status.”

By the time I was leaving the first electioneers had arrived at the perimeter spot where the closest politicking and signs are permitted – one of them, Maryland State Teachers Association employee Maura Taylor, promoting a “yes” vote on slots gambling that would ostensibly support education funding, and for Democrat Frank Kratovil for the area’s First District congressional seat.

“I’ve never been to a polling place that didn’t have 20 people standing out front,” Taylor said of the dearth of electioneers, and holding a pile of slots and Kratovil brochures in her hand.

Next to her, the lone electioneer for Republican Andy Harris had arrived and set up her signs, which included one for McCain/Palin .

The neighborhood is part of an oddly-shaped district carved out after the 2000 Census to bundle up many of Maryland’s Republicans. In the primary, the conservative state senator Harris bumped off moderate longtime GOP incumbent Wayne Gilchrest, who late in the general election campaign gave his anticipated blessing to Democrat Kratovil.

That has made the district’s congressional race the most-watched among the eight in Maryland this year.

Demographically, it looked whiter than the southern Appalachian towns from my recent two-week road trip. Among the first hundred voters, I did not see one person of color turning up at my precinct -- although the judges on duty included one who was African American.

I have a feeling that, at least in this district, I'm in the minority, too.