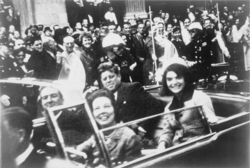 Feels a little odd, so little fanfare of remembrance over the JFK assassination – despite an anniversary divisible by 5.

Likely more than half of the world’s current population wasn’t yet born when Lee Harvey Oswald took aim from the Dallas schoolbook depository building and popped off some of the most disputed rifle shots in the history of humankind.

The spot where the presidential convertible was passing, top down, when the bullets took down John F. Kennedy and wounded Texas Gov. John Connally, has become a bizarre testament to history – marked by an X where tourists wait for a lull in traffic to pose for pictures.

The nearby “grassy knoll” became an equally odd landmark – a little berm at the roadside from which, conspiracy theorists maintained, other shots were fired.

Forty-five years ago today: I vividly remember exactly where I was – walking to my American history class at what was then Baltimore Junior College – when I heard the news from a fellow student, a Greek immigrant named Gus I recall as rather right-wing in his politics.

“They shot Kennedy, they shouldn’t have shot him,” he said, rushing in the opposite direction from the cluster of portable classroom buildings where I was headed.

A powerful word: They.

And in using it, Gus – wittingly or not – was certainly one of the first to give voice to there having been a conspiracy behind the killing.

My professor, Dr. Wilson Valentine, a retired naval commander, was in tears. He told us all to go home and watch the unfolding events on TV, saying: “I can’t teach history on a day like this.”

I noticed Oliver Stone’s conspiracy theory movie, “JFK,” was airing on a cable TV channel tonight. Heard a mention of the anniversary sometime during the day on National Public Radio.

Can’t help but wonder how different the world might have been had the top been up on Kennedy’s car as he rode through the center of Dallas on Nov. 22, 1963, or in the long haul of history, how much the same.

There’s been a lot of harking to Kennedy lately in the election of Barack Obama – the first senator since JFK to win the presidency, with the youngest family since those “Camelot” days about to take up residency in the White House.

Maybe that has something to do with it: Why, on the 45th anniversary of that horrible day, the remembrance seems so unremembered of a tragedy we must never forget.
Posted by David Ettlin at 11:32 PM

I thought it a bit odd, too that there was so little attention paid to this grim anniversary. Perhaps everyone is saving up for the 50th? I was just eight years old at the time of the assassination, but coming from an Irish Catholic family, the Kennedy Administration was a big deal in our household. As a kid mind you, I used to watch Kennedy's regularly scheduled news conferences and though I probably didn't fully comprehend the policy talk, I was inspired by his wit and style. So, his tragic death was a huge blow to me and my family and has colored who I am to a great extent. I don't think those who experienced it, have ever gotten over it. It was like losing a member of the family--someone who could never be replaced.