Footloose and fancy free,
we dance around impolitically

Problem is, you don’t have an election to obsess about, so now it’s the Obama Cabinet. And that brings out the Harpies all over again. Hillary this, Bill that.

Next thing you know, Monica will reappear selling her designer pocketbooks on QVC, because in this great land, nothing is as important as timing.

My view? I don’t need a new pocketbook, any more than I need debate over as-yet unannounced Cabinet choices. Obama won the election, and his picks will be part of the record of his administration on which voters get to chime in beginning with mid-term elections two years hence.

So I’m gonna blog about the weekend past, when Bonnie and I traveled nearly 700 miles round-trip for the sake of a photograph and an opportunity to visit friends Bob and Lee Rowley in mid-state New York.
The subject of the photo was Dirk Hamilton, who could have been a contender, rock-musically speaking, back in the 1970s. In recent years, he’s been making the rounds as a singer-songwriter – particularly in Italy where, in summer tours with a group called The Bluesmen, he may have become better known than here in the states. 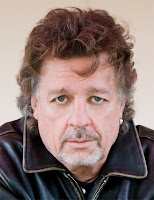 We first met Dirk at a folkie coffee house program eight months ago in Columbia, Md., in a show largely arranged by our performing friend Georgie Jessup who considers Dirk one of her major influences. Turned out we liked his songs and style a lot – and Dirk offered Bonnie an answer to a question she’s been asking people for a project under development for more than a year:

“How do you define yourself? Answer in one sentence, beginning with the words ‘I am....’ ”

I’ve answered it, and so have dozens of other people from all walks of life and ranging in age from 4 to 100. I can’t give away any of the answers, because someone still mulling over participation in the project might be unduly influenced. No one gets to see any of the answers until delivering his or her own self-definition.

It’s a tough question, if you truly engage in self-examination – although a precious few came up with interesting replies quicker than I would have thought possible. I labored months over mine, much of the time even consciously avoiding thoughts about it. In the end, I got to answer twice – one a self-view before I retired, the other after.

Anyway, answers are followed by a collaborative photo portrait session – a task that has been incorporated in our travels. In the spring, as we visited California, Bonnie got the chance to photograph Palestinian friend Salim Tamari, who was teaching Middle East history for a semester at UC-Berkeley. Catching up to him on the West Coast was easier than a trip to the West Bank.

Dirk Hamilton currently resides in a remote hamlet northeast of Dallas, Texas, which we considered visiting last month when we were touring southern Appalachia. But when Dirk told us he would be attending the annual Northeast Regional Folk Alliance conference at a hotel in mid-state New York, for us a mere 320-mile hop -- well, we could do that in a weekend!

So Bonnie got the photo, and after a couple of other conference attendees asked to have their pictures taken, we became a little conspicuous and got rudely ordered off the hotel premises by what seemed to be a conference official because we were not registered for the event and didn’t have the conference ID badges hanging around our necks. Not that Bonnie was making any money off the pictures, or that the woman barking orders to leave wanted to hear why she was there with a camera and tripod.

Seemed like a nice event, though, with hundreds of folks lugging around stringed instruments, trading guitar licks in corridors, or engaging in group performances around a piano in the lobby.

Our real weekend entertainment was a little different: A high school musical.

No, not the “High School Musical,” but a real high school musical: “Footloose,” performed by a large troupe of talented young thespians at Arlington High School in LaGrangeville, N.Y.

Our weekend host Bob Rowley, who on an ordinary day teaches music to middle schoolers, was the show’s musical director overseeing a dozen-student orchestra for the nearly sold-out three-performance weekend.

“Footloose” might be a good description for the way Bonnie and I travel, but this story – if you missed the Kevin Bacon movie on which the stage version is based – is about a high school lad who moves from Chicago to the hick town of Beaumont where, in response to a tragedy several years earlier that killed four young people, dancing was banned.

So the Kevin Bacon character, named Ren, develops this relationship with the rebellious daughter of the town preacher whose son was among the dead, and who as the town’s moral authority was the voice behind outlawing dance. And after Ren teaches that old preacher a lesson, the dancing resumes and everyone lives happily ever after or at least has a good time for a few hours.

Now this is about the time in a fun blog posting when I try to neatly wrap it all up, with a little connection to the top of this rambling nonsense that makes it all seem like we’ve come full circle. So here goes:

If the music really disturbs you, change the channel to the Outdoors Network and hope it’s showing “Caribou Week.”

Having attracted a small but steady audience to The Real Muck with an inaugural month of daily postings, I have become sadly undependable with the end of the election and a return to work in a temporary, part-time newspaper editing job. But I hope you’ll check back regularly – there’s more coming, just not every day of the week.