Our ribbon of asphalt through the Nebraska Sandhills (above), and Pilgrim Holiness Church (below, left). (Photos by Bonnie J. Schupp)

ARTHUR, Nebraska – It’s not exactly the church around the corner, but the Pilgrim Holiness Church is a must-visit kind of place. It was made of hay bales in the late 1920s, and survived the possibility of being eaten by cows with coatings of plaster and stucco.

Arthur has a population of maybe 200 – “more at night than daytime,” jokes the town’s busiest octogenarian, Don Thompson, just done mowing grass in the local cemetery.

Don found us walking around the old white church, where Bonnie was taking pictures. We were easy to find. Probably everyone in town knew we had come through in the red Camry with those flashy Star-Spangled Banner bicentennial tags from Maryland, but hardly unique as travelers drawn by their religious oddity.

Our instant tour guide drew a cluster of keys from his pants pocket. “I think I have the right one,” he allows, slipping the silvery key into a padlock that keeps out intruders – not that such a tiny place would have a church burglar. It clicks open. 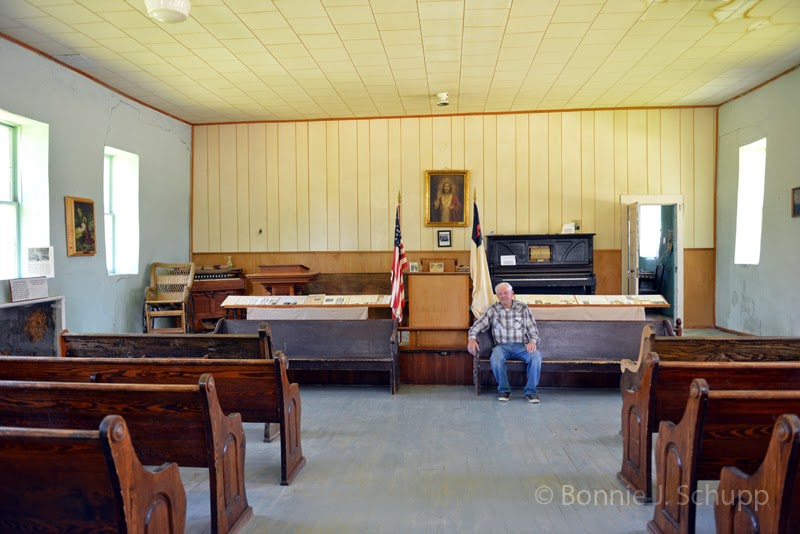 Don Thompson sits in front of the double row of pews (above), and the wall opening that reveals hay behind the plaster.

Inside, although the church hasn’t been used for services in many years, are two neat rows of wooden pews, and a fading print color image of Jesus looking out from the wall behind the pulpit. 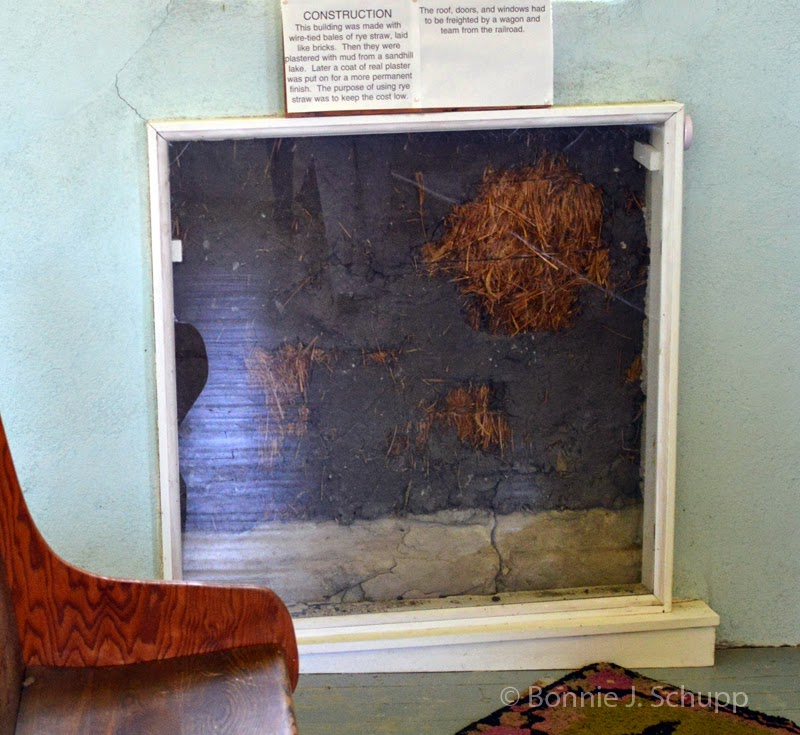 Don shows us an opening in the wall (photo, right), revealing a section of the straw under the plaster. Then he leads us to the front and sits down at an old player piano – not original to the church, but donated to the landmark by a relative. He pumps a foot pedal and the roll of music begins to turn, cranking out a hymn.

Bonnie – a church organist in her teens -- takes the seat and plays “Jesus Loves Me,” and Don (click on video, below) begins singing.  It’s so incredibly timeless, this moment in the house of worship.

Bonnie plays the old piano, and Don sings the hymn.

Then he beckons us into the back rooms, where a succession of preachers, some of them women,  made their home over the decades. Artifacts are everywhere. Old scrub washers and hand-plungers, a stove from the 1920s, dusty wall calendars with unturned pages,
lots of patent medicine bottles.

And upstairs, more furnishings – some from the church, others, like an early Singer pedal-operated sewing machine, brought there after their owners passed on. Don opens a couple of the little square drawers in the machine’s table, and there are the old bobbins and needles in perfect condition.

Time has taken a toll here. Ceilings and walls have stains and cracks, there’s dust and cobwebs. Spiders go about their business, seeming oblivious to passers-by like us. Life goes on here, just not necessarily the human part of... dare I say, God’s creation.

As we’re chatting, and Don checks in by cell phone with his wife Helen, we learn that they’ve been married since New Year’s Eve of 1950 – eligible for Bonnie’s Together 40-Plus photo-and-words project examining the glue that holds people together for so long, first with a single word (other than “love”) and then a short explanation for that choice.

“Christian,” Don says without hesitation, adding one of his ever-quick one-liners: “I’m always forgiving her.”

He invites us to their home, but on the way we stop for a look inside what “Roasdside America” lists as the world’s smallest courthouse. Don has the key, of course – the same one from the church.

The wooden 1914 building served as the Arthur County courthouse, and offices of the county clerk and commissioners, until 1961 – and, wouldn’t you know it, Don Thompson, at 83, is the sole survivor of all the commissioners who had met there for nearly half a century. A neatly typed sheet lists all the names and dates, and there was Don in the last group of three names.

There’s all manner of records and bric-a-brac sitting out on counters and tables, like old typewriters, a safe (its door removed, but lying atop it), newspapers (Warren Commission report released, Challenger disaster... historic events, but dating after the courthouse was replaced by a bigger, more modern building mere steps away). A set of shelves holds records from the local public schools dating to the 1890s. It’s a dissheveled, but fascinating, museum – frozen in time, just like the church.

And then there’s the old jail. The little wooden building, a shack really, was missing the expected padlock on its heavy wood door. Maybe folks don’t go out of their way to break into a jail. But Don told us there was one inmate many years ago, a neer-do-well named Lemuel, who tried to break out from one of the three tiny wooden-slat cells.
.e got into the outer room and banged on the inside of the heavy door, possibly with a piece of metal from the wood stove. Don couldn’t remember exactly what was used, but pointed with pride at the slight gouges that remain from the pounding. As for Lem, someone noticed the noise and foiled his escape attempt. Eventually, Don said, someone shot him. Maybe he’s in a better place? Probably not.

The Thompson house, which Don himself enlarged after Helen wanted to move into town from their 400-acre ranch some 12 miles away, is heavy adorned with Christian displays and photos of their large family. They have four children (three boys, one girl), eight grandchildren (all but one of them girls) and seven great-grandsons. The modern kitchen is Helen’s domain, and she’s talking with Bonnie and inviting us to stay for an early-afternoon dinner that’s on the stove, while Don takes me into his domain – a cluttered office packed with his shortwave radio equipment.

Don has been on the airwaves since the early 1950s, even built his own 100-foot transmitting tower out on the ranch. He’s also been a pilot, as co-owner years ago of a family airplane, still works as an electrician, digs the graves and buries the dead, and even works for a nearby county as a part-time roads inspector. One of his paintings, of the little ranchhouse where he was raised, is hanging along with many souvenirs and awards on the wall, near a drawing by a granddaughter of Jesus on the cross. Don also allows as how he’s been a writer, even selling some of his stories.  As I said, he’s rather busy for a country gentleman of 83½ years.

Helen sets up a card table in the living room and Bonnie helps open a set of folding chairs where we sit down to a supper of homemade meatballs and gravy, with macaroni salad, corn, and bright red and yellow varieties of fresh tomatoes. We hold hands, and Helen offers a prayer of thanks for the food, and for us visiting them.

Religion is her strength. And, for Bonnie’s project, it is also her word.

Her explanation is much longer than Don’s, but at its essence, she says, “Jesus Christ is our mainstay. All of our children go to church.” And there’s great pride and inner strength in her faith.

Our lives and feelings about religion are vastly different. But here in America’s heartland, some 1,600 miles from home, it’s good to look at the place of belief from another, very real, point of view.

And now this: Carhenge

From tiny Arthur, we hit the road for about 90 miles north and west, along scenic Route 2 through the Nebraska sandhills – seeing plenty of rolling hills of grasslands but hardly an ear of corn. This is cattle country, where many ranches are measured in thousands of acres. We had the railroad tracks to our right, and about every 30 minutes a long eastbound train would pass us, hauling cars loaded with Wyoming coal.

Carhenge... America at its whimsiest.

Our destination was Alliance, home to that oddest of tourist attractions in this huge state: Carhenge. Doubtless you’ve seen it pictured, the old cars partially buried nose-first in the ground, and others balanced and wired atop them in imitation of that other “henge” in England. A town museum video on area history from native American roots to the 21st century took note of Carhenge, putting the number of visitors at some 87,000 a year. And small wonder, because it’s hilarious – the cars, and whimsical sculptures mostly crafted from car parts and an occasional chassis.

Carhenge was created in 1987 by engineer Jim Reinders as a memorial to his father on land once farmed by his family. It has grown in recent years with art-car contributions by other artsy folks of similar quirky bent.
Whether one might call it a spiritual invocation or spoof of the American auto industry, no doubt about it being art. It is very much in the spirit of Baltimore’s American Visionary Art Museum.

It was late afternoon, and we decided to spend the night in Alliance – particularly after our friends at the IHG hotels group 800-number told me there was special deal, and our king-bed room would set us back only 5,000 points a night. And it proved so convenient and comfortable after 12 days on the road, we decided to chill out for two nights instead. (Somehow, after four free nights this trip, we still have nearly 65,000 points available!)

On our second day, Saturday, we explored the sleepy town. Most shops along Box Butte Avenue, the historic business district, were closed. The impressive-looking Alliance Theatre movie house, dating to 1937, was the brightest spot – but not open until evening.  We drove about half a mile to find Central Park, graced by among other attractions a spectacular fountain, an arboretum (closed, but beautiful outside gardens accessible), and the Knight Museum Sandhills Center.

Named for a town doctor who became one of its most successful businessmen, and left money to build it, the museum has a large collection focused on regional history and fascinating artifacts. We luckily arrived on one of the final days for a traveling show of photographs of native Americans from the late 19th and early 20th centuries, which complemented the museum’s display of native art and lifestyle relics.

When we arrived in Nebraska about four days earlier, it was a world we knew little about beyond its flat corn country. Now, as we prepare to leave for South Dakota, it’s like an old friend... albeit, Republican. We’ll miss it, and the kindness of strangers who casually greet you with a “good morning” as your turn the aisle past them in the Safeway supermarket.

What a wonderful journey you're having. Thanks for sharing.