In the tiniest of towns,
we meet the Postmaster

REDIG, South Dakota – The sparkle of sunshine reflecting off some of maybe 150 cars and trucks out beyond the cow pasture catches my eye along U.S. 85, a dot of a place about three inches below the Dakotas’ border on our Triple-A map. The vehicles outnumber the grazing black cattle.

We stopped for a moment, then turned around on the two-lane ribbon where
a high speed limit could render this tiny outpost invisible to passers-by. Across the road stands the Redig Post Office – a shack-like building next to a small patch of sunflowers and vegetables, and front yard to a small cluster of seemingly junked mobile homes. There’s a trio of old gas pumps on the front lot.

At the counter stands Edgar Kumley, folksy postmaster and proprietor of the pastoral salvage yard, farmer and native – and likely longest-term resident -- of Redig, whose population he puts at “ten today, maybe five tomorrow, one next week.”

“How long have you been postmaster?” I ask.

There’s a computer hard drive atop a row of old dry-goods drawers, and Bonnie asks if that’s his computer. “No,” he says. “My granddaughter’s.” He says her computer equipment is all over the place.

And that raises another question, about what kind of impact an old man like Edgar Kumley makes in a wider world. Numbers help define it: Ten children that he and his wife put through college, and 35 grandchildren.

“How many great-grandchildren are there?”

The children and grandchildren and beyond are spread out across the nation, among them at least one doctor and lawyer... and probably more. 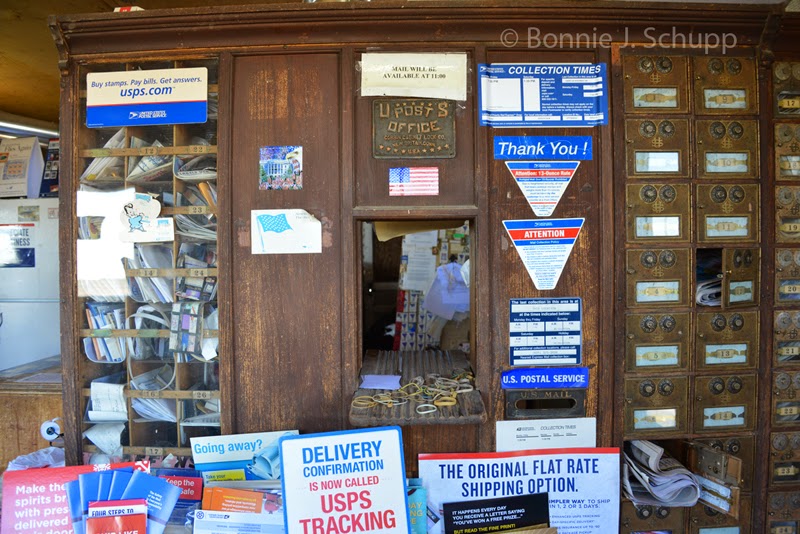 People from a wide area around Redig pick up their mail at the post office, where slots for each resident are filled with letters, magazines and, more than likely, junk advertising. But the postmaster says he gets little mail himself.

There’s a lot in the outside world that bothers him, starting with the U.S. Postal Service itself – that since its conversion to an independent agency back in the Nixon administration, it is not managed by the U.S.  government. “I voted for Richard Nixon,” he says, blaming him for giving away the postal service. “He was a thief.”  And no matter how the independent agency views it, he says, “the people own this post office, the people paid for it.”

Edgar is a Republican, but not bound up by party lines in his thinking. “That man in the White House,” he says, as I begin to hold my breath, “is the smartest and most cautious we’ve ever had.”

And in the slow-moving world of a 94-year-old postmaster, that’s excellent. He says Barack Obama is not jumping into war with Russia. Conflict like that, he fears, could ultimately go nuclear and that just three bombs could end the world as we know it.

A fan whirrs near a cracked window. There’s no air-conditioning. Afternoon temperatures outside are well into the humid 80s, and he wears a long-sleeve plaid shirt despite the heat. He slips on a pair of dark-lens glasses to ease the strain of bright light, just a few weeks after eye surgery. He’d badly injured an eye decades ago when a belt snapped as he and a son were working on a car, but surgery repaired it. Much more recently, he said, something flew out of a mailbag and damaged the eye again and now he was recovering from another repair job.

A postal patron walks in to pick up mail and exchange pleasantries. And it’s time for us to go. I reach out to shake Edgar’s hand. His fingers are thick, his hand rough, his grip stronger than a 72-year-old’s.

Thanks for your comment on my blog about your grandpa -- I would guess he's really a great-grandpa, however.... My wife and I were happy to meet him on our 32-day cross-country adventure. Did you find my post through a Google search? Noticed you have begun blogging. and mentioned your desire to become a nurse. That's what our older (of two) daughter did, getting her nursing degree at age 40. She became an ER nurse in a hospital near Washington, D.C. Took her awhile to figure out what she wanted to be when she grew up. But was easier for her... no children.
We wish you well in following your dreams! (And feel free to share my blog with your family... it was just one of, so-far, 13 posts from our trip.)
Cheers!
-david

Aww, he's my grandpa, too! Actually, David, both Vanessa and I are part of the 35 grandchildren, part of the middle-ish-older group. We do have second cousins (Edgar's great-grandchildren) that are the same age as some of our cousins, though. Large families that have their own large families tend to have overlap like that. Thanks for the blog entry and your thoughts.

If all of your grandpa's descendants read my blog, my hit count would go way up! (It was really a pleasure to meet him.)