Why would anyone ever want
to drive to NORTH Dakota??

Venturing from missile art to a peace garden


NORTH Dakota – It’s hard to pick a dateline for NORTH Dakota, even hard to believe we actually got to NORTH Dakota. But we found it right where the state belonged, on top of South Dakota, and the adventures were so spread out you’ll just have to take it as a whole.

Didn’t take long to find the bizarre as we crossed the Dakotas’ border on two-lane U.S. 85. It was on the right side of the road in the town of Bowman, a cowboy riding... a red and blue missile. Complete with a bold red USA on its tail. It was like a scene out of Dr. Strangelove, but mounted atop an old truck that had a golden eagle as a hood ornament. 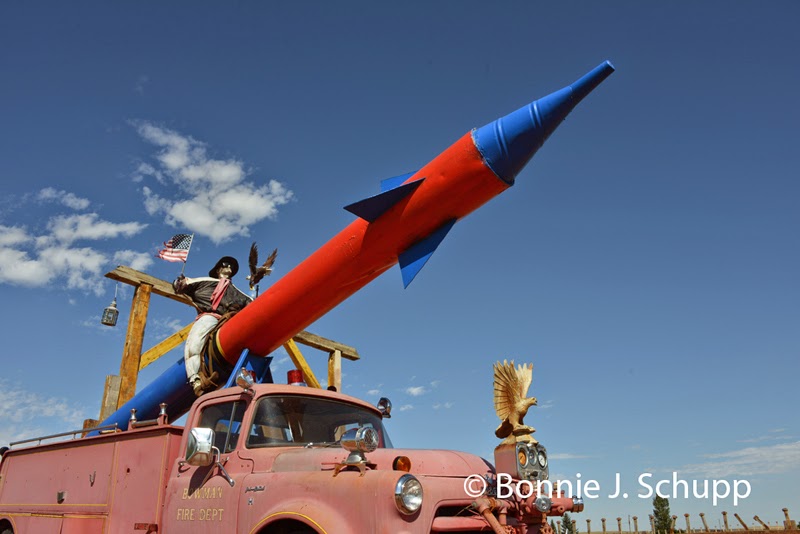 If you didn’t notice the missile at first, that’s understandable – considering it was parked next to a bridge that had an airplane on top of it. And the bridge, with a road surface made of weathered wooden beams,  didn’t seem to go anywhere.  But I was assured by folks in a nearby insurance office it was safe to drive across. The owner of the property and apparent wizard behind the outrageously comical display owns a construction company, and his trucks have crossed the bridge, they said.

So I eased our Toyota Camry across the heavy wooded slats, and stopped in the middle so Bonnie could record the crossing. I just wished I could have moved the entire display back to Baltimore, because it was a scene straight out of the American Visionary Art Museum playbook.

A young chap from the insurance office walked over before we left, admiring my Ravens cap, and happy to give us Easterners some suggestions on our itinerary. For one thing, he said, don’t stay on U.S. 85 for too long, because it runs smack into the oilfield boom that is dominating the northern part of the state. He suggested cutting across the middle after our drive through part of Theodore Roosevelt National Park, and visiting the International Peace Garden on the U.S.-Canada border. 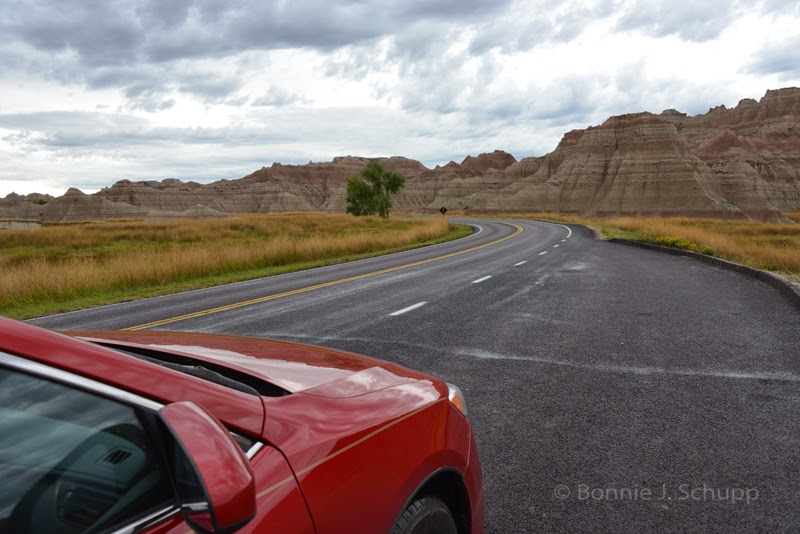 We veered briefly westward across Interstate 94 to reach the South Unit of Teddy Roosevelt country, which was quite scenic – but another dose of badlands. We drove a loop road through the park, then went motel hunting in nearby Medora. It was, for this master of the cheap rate, a little over the top. I define that as $140-plus for a night. There was one place that had a $99 rate, but it just didn’t look very appealing.

So back on I-94, figuring there would be plenty of motels along the interstate. Well, there were a few – but none with a vacancy. We drove about 100 miles through a fierce thunderstorm while Bonnie shopped for motel vacancies anywhere close to our route. Just about every room was taken, apparently by oil boom workers in a region that can’t build housing for them fast enough.

Finally, in Mandan – a suburb of the state capital Bismarck (remember that for your next appearance on Jeopardy) – she scored a $99 room in a Best Western hotel that proved to be sheer luxury. Of course it didn’t include breakfast, which we ended up buying the next day in the hotel steakhouse restaurant. Sigh.

A day of distractions

By noon the next day, we were leaving the interstate to traverse State Highway 3 due north toward the Canadian border.

Of course distractions are inevitable for us, the first of them a turn off the roadway to check out the business district of tiny Hurdsfield, and perhaps find someone who could identify an old white building Bonnie had photographed 20 miles back... which turned out to be an old schoolhouse.

The business district was about two blocks long on a street by the railroad tracks, where we poked our heads into the cafe in search of a restroom. And we found hospitality. We sat down at a table where Lou Weckerly was having her pasta lunch, and got to chatting. Lou owns the community store, and she and her husband own an area grain farm. But they flee to Florida in the winter rather than endure the below-zero weather here, she said.

The wall of the cafe is covered with signatures. It was the result of a fundraiser that enabled the cafe to install new carpeting – donate a dollar, sign the wall. There were a lot of names up there.

We were about to pay for my coffee and Bonnie’s root beer, but Lou would not let us pay. “I’ll take care of it,” she said, wishing us a safe journey.

Another distraction was Rugby – not the game, but the town. Its claim to fame – not to be confused with center-of-the-USA Belle Fourche, S.D. – is being the geographical center of North America. We gather that this calculation did not include Mexico, but a town’s gotta do what a town’s gotta do. There’s even some accounts that the center is miles from Rugby, but why quibble? Rugby has a lovely stone obelisk staking out its middle ground.

By the time we were getting close to our destination, it was late afternoon and storm clouds were growing. We passed through the town of Dunseith one of several towns that celebrate their Turtle Mountains identity with giant turtle statues. I noticed one about 12 feet tall apparently made of truck parts, but missed the one pictured on the ‘Roadside America’ website made of several thousand steel wheel rims.

Looking without success for lodging, we called the International Peace Garden and were directed to the closest places – about 20 miles away, down a scenic country byway. It was too late to visit, since the attraction closes at 5 p.m., and rain had begun to fall.

For all the 300-plus miles we had driven to get there from Medora, the Peace Garden was beautiful and inspiring – a project of the early 1930s covering 3.65 square miles straddling the international border and celebrating the peaceful relationship shared by the U.S. and Canada along a basically unfortified transcontinental border. The entrance is located between the two nations’ immigration checkpoint inspection stations.

Aside from the beauty of its huge gardens and a conservatory with the largest cactus collection I've ever seen, the park features twin 120-foot concrete towers straddling the border, and a peace chapel whose interior sandstone walls are inscribed with quotes from the famous, the historical and even a few anonymous people. Every quote is worth contemplating. Here are a few:

When one door closes another door opens. But we so often look so long and so regretfully upon the closed door that we do not see the ones which open for us.
-- Alexander Graham Bell

Nonviolence and truth are inseparable and presuppose one another. There is no god higher than truth.
--Mahatma Gandhi

Dost thou love life? Then do not squander time. For that is the stuff life is made of.
-- Benjamin Franklin

After several hours not at all squandered at the Peace Garden, we had to choose a route – backtracking or, as I preferred, crossing the border into Canada for a peek at two provinces we had never visited. We’ve done and loved the Maritimes, Ontario, Alberta and British Columbia in years past, but here was a great opportunity to see Manitoba and (I can spell it now!) Saskatchewan.

“How long do you expect to stay in Canada,” the border crossing officer asked. “A day or two,” I replied.

The highlight was probably the turtle statue in the Turtle Mountains community of Boissevain, Manitoba -- and I couldn't resist posing for a picture to give my readers a sense of its size. Take that, Marylanders -- Fear the Turtle!

About four hours of endless farmland later, Bonnie had gotten her fill of that part of Canada and directed me to turn left and back to North Dakota. “This trip is about the U.S,” she insisted. “I never wanted to go to Canada.”

I reluctantly admit she was right. And that's what I told the U.S. immigration official as we crossed back onto USA soil. "How long were you in Canada?" he asked. "About four hours," I replied. "We've seen enough."

And he smiled. "Welcome home."

Oilfields be damned, it was time for northern North Dakota. And it really was fascinating to see endless farmland where grain surrounds oil drilling rigs that look like alien grasshoppers. That and the booming development evidenced by logistics companies, temporary housing, new shopping centers and roads under construction. We heard that North Dakota is that rare state – it has a budget surplus. Small wonder. But it’s a mess up there.

After an overnight in Minot, it was time for some westward expansion to our itinerary: Oh, Montana! Oh, Wyoming!

It's been fun following your travels! Love Bonnie's photos, too!

Good stuff here. Keep doing what you are doing. One note: Actually, Mandan is not a suburb of Bismarck. The two towns have 150+ years of separate history and only after 1950 did urban sprawl begin to connect the two. There was no bridge connecting the two communities until about 1925, and even then, the towns were miles from the river. They were in two different time zones until the 1970's. They are the county seats of their respective counties. They have very different histories, very different personalities. However Mandan (named for the indigenous Mandan nation) lives in the shadow of the state capital.

You are writing a great blog and I admired your work, your photos and your effort.