We find the spirit of Sacajawea in a Native American cemetery and have some fun in an old prison gas chamber...

I know, that sounds very odd.

HERE AND THERE, Out West – We’d been to Montana, Wyoming and Colorado before, but some places you just need to revisit. There’s always something new to discover, and it didn’t take long after crossing the border from oil-drilling country in North Dakota.

For one thing, Montana looks different just about immediately. Rolling hills of grazing land on ranches too large to imagine, and only an occasional giant grasshopper head bobbing up and down to pump black gold from somewhere in the earth. Big oil seems not so big a deal, yet, in eastern Montana.

Our first stop is Culbertson, along U.S. Highway 2, home to a surprisingly large history museum and its oddest oddity – a railroad caboose formerly occupied by an anonymous hobo who thoroughly decorated its inside wall space with his take on the Bible’s Revelation to St. John. With magic markers. Visions of the Apocalypse. Yet another piece of oddball Americana that would be right at home at Baltimore’s American Visionary Art Museum.
The Culbertson Museum also features, in room-by-room displays, depictions of ordinary life over the decades – a schoolroom, a doctor’s office, the barber and beauty shop, an early homesteader’s house. Each is populated by mannequin figures, and crammed with antique bits of the past, down to the little bottles of early remedies. There’s clothing, pots and pans, ink-well desks. And outside there are old tractors and other machinery, even an old fire engine.  It was way too much to take in during our short, but rewarding, visit. (Admission there is free, but donations are appreciated.)

Our big destination was the town of Hobson, where the Sunday after Labor Day is celebrated as “Hay Day.” It was that rare opportunity when we could get to a place where something exciting is happening, not a place where that something happened last week or will happen next month. It was a “now” and a not-to-be-missed event linked to the harvest of a major local crop – hay.

I have to admit that hay makes me sneeze. But in Hobson, it made us both laugh. Bonnie, the fearless navigator and Web surfer found it online, and it sounded so zany that we drove more than 300 miles across some lonely, narrow (and high-speed) back roads to get there. 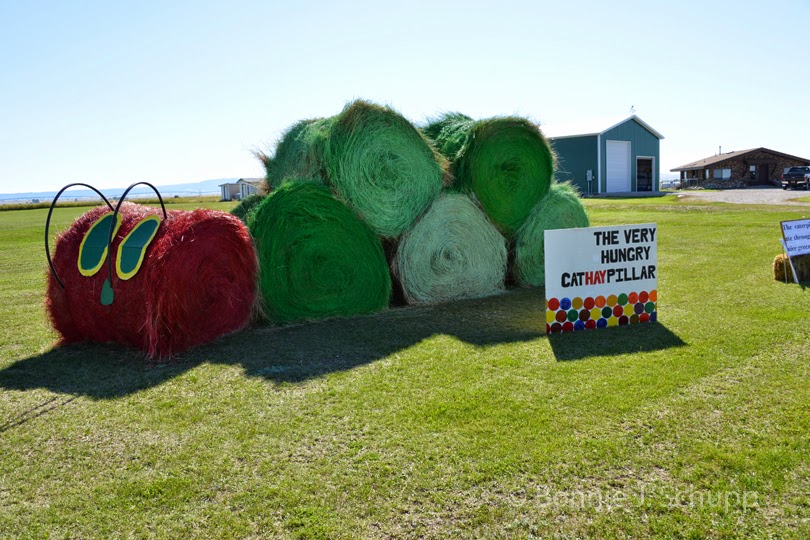 Along a 22-mile stretch of two-lane blacktop between Hobson, Utica and Windham, folks of all ages create hay sculptures that must be up by 8 a.m. that Sunday – and they’re supposed to survive for a week of viewing pleasure. The speed limit is usually 65, but on Hay Day the reality was 15 MPH as folks drove what is called the Hay Bale Trail to take in dozens of whimsical works of hay art.

They had names, of course:  Pork ‘Hay’ Pig, Scoob-Hay-Doo, Win-hay the Pooh, Pork-Hay-Pine, Croc hay dile, Rudolph the Red-Nosed ReinBale, Godz-hay-la, The Very Hungry Cathaypillar, Boob-hay trap, She thinks my tractor’s sex-hay (a hay bale tractor with a couple of cute gals waving from it to passers-by).

Movies, music and current events were represented: The Lhaygo Movie, Straw Wars, Because I’m Happhay, the Ice-Hay Bucket Challenge all had their Hay Day in the sub. One clever participant put out a simple bale of hay, and a sign with its title: “We are not CreHayTive.

Fanc Hay Pants, John Hay on the Spot, Needle in a haystack. Back in Hobson’s tiny business district, there was a Hay Zoo that includes El-Hay-Plants Blowing Bub-Bales.

And it was Sunday, so we cannot leave out the Meth-hay-dist woman.

Want to get yourself into the picture? There was a frame set up in front of hay bales for taking... wait for it... a self-hay.

After about two hours of laughter and photo-taking, we were back in town – dropping off our ballots in voting for the top three entries (and, in the ballot envelope, a cash donation to support the annual event). Bonnie and I agreed on the best – and we learned from an online report later in the week that it won top honors: Haypunzel, Let your hayr down. Straw Wars and Win-Hay the Pooh finished second and third, respectively and hilariously.

Back to the mountains

With five travel days left before our scheduled arrival in Aspen, Colorado, it was time to head southward – but not necessarily in a straight line. We left Montana through the entrance to Yellowstone National Park, where road construction inside the gates resulted in a delay of more than half an hour. And we avoided a route to Old Faithful that was closed for road repairs. Instead, we followed U.S. 89 through the Grand Canyon of the Yellowstone (where we had rented a cabin last time through), past the bubbling and smelly mud pits, around Yellowstone Lake, and south through an edge of the Grand Teton range.

What’s left to say about great spectacle? We found elk and bison roaming the parks, and Bonnie got a classic photo of a bison leading a line of traffic down the road.

We followed the AAA map’s dotted path onto U.S. 287, heading southeasterly, and crossed the Wind River Indian Reservation – lucking into one of the most interesting places of the entire trip in Fort Washakie, spotting the only sign pointing to it down a narrow reservation roadway. Not even a mention of the distance, and down that road not even another sign showing where to turn. Some local folks driving out of their neighborhood pointed out the left turn to get there.

It was the gravesite of Sacajawea. Or maybe the purported gravesite of Sacajawea. There seems no certainty in the historical record about when she died or how, but on the highest ground of a Native American cemetery at Washakie stands an eloquent statue depicting the woman who, as a teenager, served as a guide to the Lewis and Clark expedition exploring and mapping western reaches of the continent.

The statue had been adorned with flowers and rings, and a variety of objects and coins left as offerings at its feet.

The Sacajawea Cemetery below the statue was fascinating, with each grave mound heavily decorated by friends and family of the deceased – creating a colorful patchwork of flowers, beer cans, jewelry, clothing, toys and the like. Even boots, and tennis shoes.

It was these artifacts decorating the graves that gave us a real sense of the humans buried there—unlike the uniform, traditional flowers and headstones adorning graves in other cemeteries.

It was, in a word, haunting.

Continuing down the road, we chose a route toward Colorado based, in part, on the likelihood of a comfortable motel for our third night since the crossing into Montana. We ended up in Rawlins, where Bonnie had found yet another distraction: The Wyoming Frontier Prison, where you can get an hour-long tour of the way it used to be for folks who should have behaved better.

It starts with a scale-model demonstration of the Julien gallows – named for the inventor of this Rube Goldbergian contraption that was triggered by water draining from a bucket, so no executioner was needed to pull a handle. The last sounds the condemned would hear was about a minute of trickling water, then the trapdoor would be sprung.

The prison had a very good baseball team early in the century, playing on a field behind its high concrete walls. Visiting teams from the region would come in through a double locked gate behind home plate. But, alas, the success was not lasting – after the prison team went undefeated, its star catcher (convicted killer Joseph Seng) was gone -- hung from the gallows in 1912.

We saw a series of cellblocks, and how their style and mechanics changed over the decades. None was very nice. But there was art – murals in the mess hall painted by a one-armed, two-time inmate with a record of theft and forgery.

Hanging was replaced by a gas chamber in the 1930s, and since we were joined only by one other couple on the 10:30 a.m. tour, there was time for me to try out its metal seat. It was not very comfortable.

When I posted the picture on Facebook, some of my friends suggested I belonged there. One was offended, pointing out that our people had been gassed by the Nazis. But lighten up, folks – this gas chamber was used individually only five times, lastly in 1965. The state’s statutory method now is lethal injection, and there’s apparently been only one in Wyoming since the gas chamber was retired.

The gas chamber is just a bizarre relic of its era, just like this prison – operated by a local foundation with grant funding, gifts, tour fees ($8 for adults, $7 for seniors), and sales in its gift/book shop. Almost bought a reproduction prisoner outfit. Halloween, you know – or maybe some fun stock photo poses.

Up next: Colorado, a wedding, and the turn toward home

Did Bonnie get pics of some of the other hay sculptures? Are they posted somewhere?