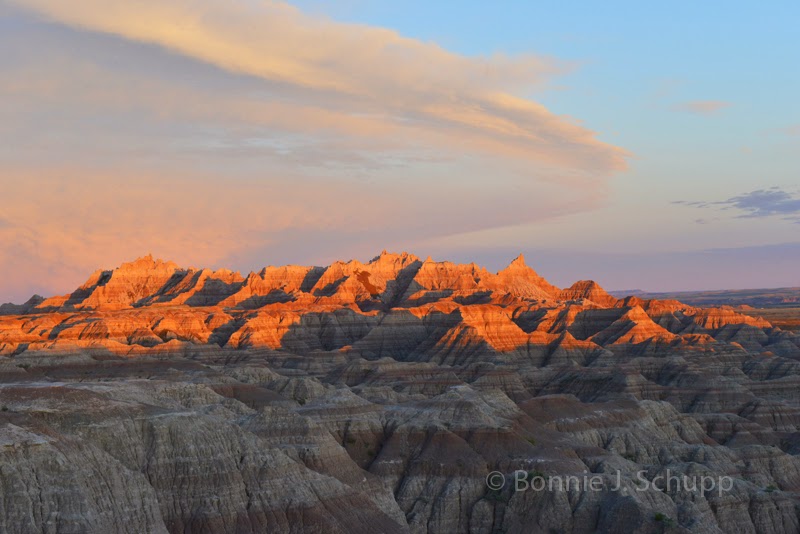 Rushmore and a lot more


and get this – the center of America!

After spending the better part of a week crossing Iowa and Nebraska, why the Dakotas? For the tourist in many of us, the answer would be South Dakota’s Mount Rushmore and the Badlands (but for us, add the people we meet along the way).

Driving out of largely treeless Nebraska, we aim for southwestern South Dakota and the heaviest concentration of attractions – around Black Hills National Forest. Our first night is in the town of Custer, a few miles from the giant sculpture depicting the head of Crazy Horse – the Lakota warrior chief who took part in the famed 1876 Battle of the Little Bighorn where Gen. George Armstrong Custer  and his cavalry soldiers were slaughtered.

The town bears the name of the loser, while Crazy Horse gets a mountain profile. We drove past Crazy that evening, balking at an admission price that seemed a bit steep... believing a variety of online observations that seeing it from the road may be just as well. In fact, we got a good view from the roadside, and saved our energy for the bigger and more famous Rushmore and its mountainside carved images of four presidents.

Rushmore was spectacular. We spent four hours the next day, enjoying the giant sculpture of George Washington, Thomas Jefferson, Teddy Roosevelt and Abraham Lincoln, a sight more spectacular that any photo we’ve ever seen of it. There were other features, including a walking trail/boardwalk affording different viewing angles, and the workshop of the late sculptor Gutzon Borglum who oversaw the federally-funded project from 1927 until his death in 1941.

The workshop has grown to a display of Borglum’s huge scale model of the sculpture, where a park ranger named Ed was giving a terrific talk about the project’s history as we arrived – fleeing a sudden strong thunderstorm. Hail was pelting the area as we listened, and then browsed the exhibits and gift/book shop until the storm had diminished.


We also encountered, on a park road, a modest herd of bison that became a traffic stopper as tourists (yeah, us too) gawked and took photos. I tried to imagine how this region must have looked in the years before pioneers pushed out the Native Americans and hunted the animals – bison, buffalo, whatever you call them – nearly to extinction. Imagine herds with thousands of them thundering across the grasslands.

From Rushmore, we embarked on a terrific loop drive through part of Badlands National Park, but along the way became briefly confused by an intersection where a road sign for “Scenic” pointed to a right turn... instead of going straight, as the map showed.

“Scenic” turned out to be the name of a mostly-ghost town, less than 100 yards down the road, and an opportunity for one of my goofy photo-ops as I stepped into a jail cell (next to one occupied by an amused tourist in a small group from Denmark). Did I say “going straight” in the previous paragraph?

The proprietor of the gas station/snack stop across the road said the town pretty much died in the 1950s, and that it was a bad idea to walk past the road-front into a fenced-off area of other town ruins: “Rattlesnakes.”

As evening approached, we drove the loop of more than 20 miles through some of the best Badlands scenery, finally reaching an overlook where Bonnie put up her tripod and set about taking a series of photos recording the shadows cast by the setting sun. I amused myself by offering to take photos of couples stopping at the overlook – among them Gretchen and Scott Kirchmann, and their exceptionally well-behaved young son and daughter.

Turns out that among Gretchen’s resume of trades is journalist, for an outfit I’d never heard of: The Cowboy Lifestyle Network. Who knew?

One of her latest stories posted at its website struck a little close to home for this Greater Baltimoron. It’s headline: Star Spangled Banner Celebrates 200th Anniversary in September / Fort Meade, South Dakota the birthplace of our National Anthem.

Who knew? And not just that South Dakota has a Fort Meade. Don’t believe? Check out this link to her story: http://cowboylifestylenetwork.com/star-spangled-banner-celebrates-200th-anniversary-september/

The next day, we passed through (and passed up) Sturgis, the town best known for its annual invasion of motorcylists, instead making the obligatory stop in Deadwood where the Midnight Star casino and saloon displays movie costumes and props from a dozen or more Kevin Costner movies (including his baseball jacket, bat and glove from “Bull Durham”). Costner owns the establishment. You could look it up.

I liked that better than losing three bucks playing slot machines at a couple of the many other casinos that dominate Deadwood’s Main Street.

Of greater historical interest: Wild Bill Hickok was fatally shot in the back of the head in 1876 while playing poker in a Deadwood saloon. He was just 39, although maybe that’s old for a gunslinger. We visited his grave in Mount Moriah Cemetery, high above the town. There rests another legendary western character, Calamity Jane, who, supposedly at her dying request, was buried next to him in 1903.


Center of the USA

Then we headed north on U.S. 85, for our next-to-last stop in South Dakota: The town of Belle Fourche, which celebrates itself as the geographical center of the United States. Now I would not guess in a zillion years that dead-center USA would be in either Dakota, but in truth the center has moved over the years as the nation expanded westward. The trick here is that the admission of Hawaii and Alaska to the Union made the difference.

The town’s little bit of celebrity is marked with a beautiful centerpiece monument in a park bedecked with flagpoles flying the colors of all 50 states. And Maryland’s waves close to the center. Of course I stood right atop the mid-point of the monument for another inevitable picture.

About midway between Belle Fourche and the Dakotas state line was Redig, the topic of this Road Trip blogging’s Part 8. Missed it? There’s links below to the entire adventure, to date.