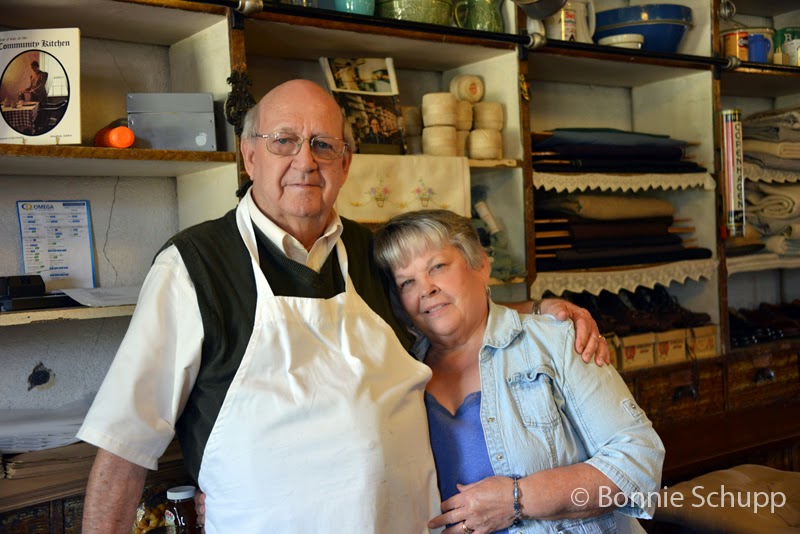 Myra and Keith Taylor, behind the counter at the Amana General Store. (Photo by Bonnie J. Schupp)


IOWA CITY – One of the challenges in a quick first-time exploration of a large state like Iowa is figuring out a route linking places of interest off the map and a little online research. From Grant Wood country, we followed a looping journey through Cedar Rapids and Iowa City.

Cedar Rapids was an overnight stop, and I asked the motel desk clerk where in the area the movie “Cedar Rapids” might have been filmed. The answer was nowhere – that Iowa was not particularly friendly to the tax breaks sought by moviemakers. Indeed, as I subsequently found in the movie’s Wikipedia entry, “The failure of an Iowa film production tax credit reportedly is the reason that the film was shot in Ann Arbor, Michigan...”

The next morning, Bonnie prevailed on her suggestion to visit the historic Amana Colonies, a cluster of seven villages founded in the mid-1800s by a German Lutheran breakaway group, the Inspirationists. Many moved to America, and in 1855 the first of the Iowa villages was built – taking the name Amana, from the Bible’s Song of Solomon, according to a welcome guide to the area. It is said to mean “to remain true.”

Their communal life remained true for nearly 90 years, and the Amana Society still farms the land and owns various businesses, although only a relative handful of descendants of the original settlers remain as stakeholders. The best known Amana is the appliance business, dating to the 1930s but now owned by Whirlpool, according to the guide. It still operates in the area, and is the largest employer. 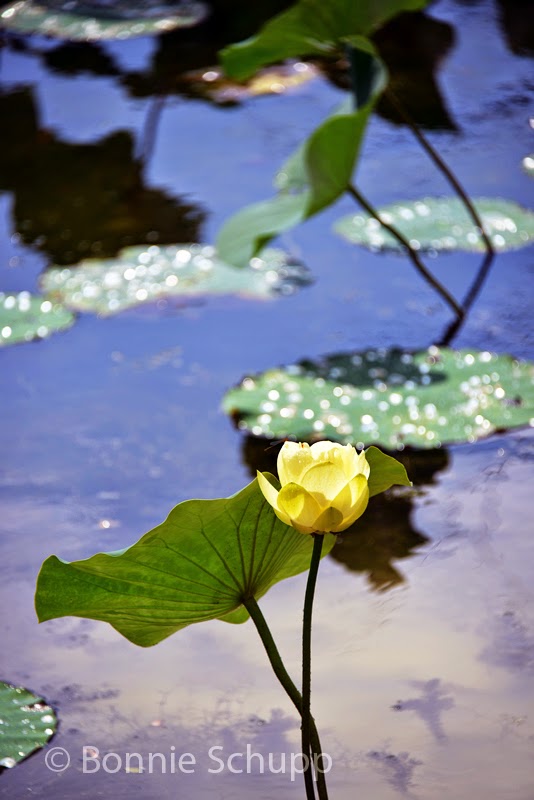 We made a few stops on our drive around Amanaland – including its scenic 170-acre Lily Lake, and its vast growth of lily pads and their bright yellow American lotus lillies in bloom. And frogs, of course. What’s a lily pad without a bullfrog? (Answer: A vacancy.)

In the Amana General Store (1858), we browsed shelves stocked with crafts, food products, confections and curios, and met a couple of retirees who are volunteers there – Myra and Keith Taylor, married since 1962 and amendable to taking part in Bonnie’s 40-Plus photography-and-words project focusing on what people see as the glue that keeps them together over the course of four decades and longer. Bonnie took their photo portrait behind the store’s old wooden counter (above), and they helped us decide on a place for lunch – the Ronneburg, whose name comes from a German castle which had been an early settlement site for the early Inspirationists.

Bonnie had saurbraten, a favorite dish, which she said was very good – and the quantity in the smaller portion she ordered was larger than she could eat. But oddly, she said it was not as tasty as the version she occasionally gets back home, at the little Highlandtown neighborhood tavern Roman’s Place, where our Aging Newspapermen’s Club and Young Women’s Auxiliary meets weekly for lunch. (Don’t run over there and ask for it right now, however – the dish is seasonal, served in the colder-weather months.)

We were not sure about heading next to Iowa City, particularly as we searched without success for an archaeological site where fossils were said to abound in suburban Coralville. For one thing, a new Marriott hotel and some highway construction had altered the area road configuration, rendering our old Tom Tom navigator’s instructions useless. But just then we heard back from a young Iowa City woman, Laura Kelly, who is local member of couchsurfing.com. Checking online, she found us a street address for the site along a French-named roadway that basically means Prairie Dog Boulevard. Along the way, we found a visitor center that had closed an hour earlier, but no dig site – and the address listing that was at least a mile away appeared to be in the middle of an inaccessible marsh. We did, however, find by accident what is reputed to be the world's largest wooden nickel, really a clever political message that reads, "Vote for common sense." 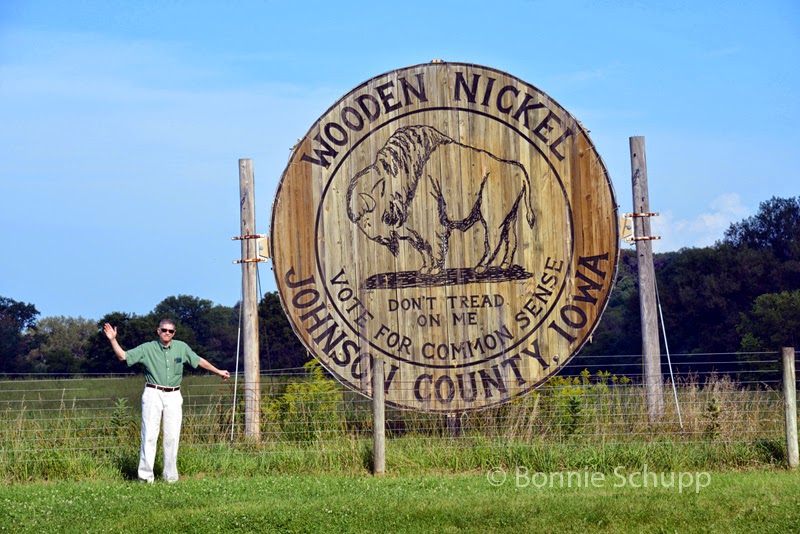 But our new Couchsurfer friend, Laura, was amenable to getting together for a drink in Iowa City and suggested we meet outside the old Nebraska capitol – a gold-domed landmark that was first a territorial capitol and then the first state capitol, and now the centerpiece for the city’s dominant industry, the University of Iowa. 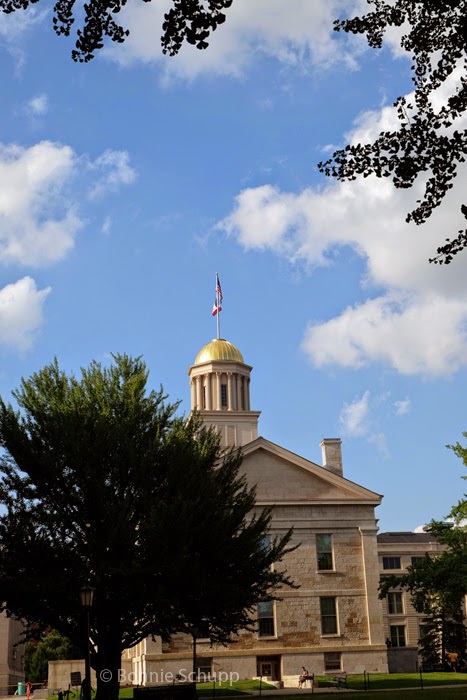 It was the fall semester’s first day of classes, and the campus was bustling with activity. Alas, it was also the only day of the week that the old capitol building was closed to visitors, but I managed a peek inside and at the underside of the dome. I can report that the building is beautiful, but not as amazing as Maryland’s own Colonial-era State House. And George Washington never set foot in Iowa.

In search of a restroom, I found my way into a nearby biology classroom building where the cool basement level was lined with the glass display cases that constitute the university’s very nifty natural history museum. 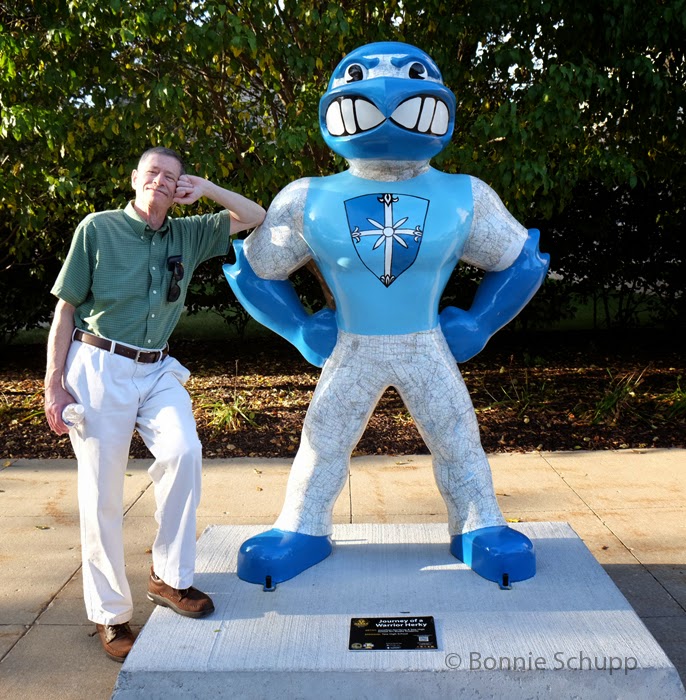 We walked around the neighborhood with Laura, stopping for my latest silly photo op with one of the many small statue depictions of school mascot Herky the Hawkeye and then a drink at a local saloon suggested by one of my Maryland-based Facebook friends – the Deadwood. It was a little early on the still-blazing hot evening for liquor, so we had some Cokes. My diet Coke, frankly, tasted like it came from a mix not up to standards. Maybe I should have opted for a beer.

Laura, raised in Chicago but educated in and now enjoying life in Iowa, works with the disabled by day, and two nights a week – including this one – is employed overnight, when she gets paid mostly to sleep in the apartment of two visually-impaired adults.  Since we had some miles to go before we slept, we walked back to our car with her and then bade our goodbyes. We, of course, extended an invitation to visit if she ever finds herself in the Baltimore area.

And off we went, headed west on Interstate 80 again, aiming straight for Cornhusker country – Nebraska.

The next day, our first stop – and last in Iowa, on the outskirts of Council Bluffs – was a particular gasoline station, where the online search had turned up an old Sinclair dinosaur. Although it was a bit of a brontosaurus, it was not a very big one. But at about four feet in height, it was another David Photo Moment, as I climbed aboard and waved my cap like a rodeo rider about to survive eight seconds on a bucking bronco. Some say I am easily entertained. Yeah. 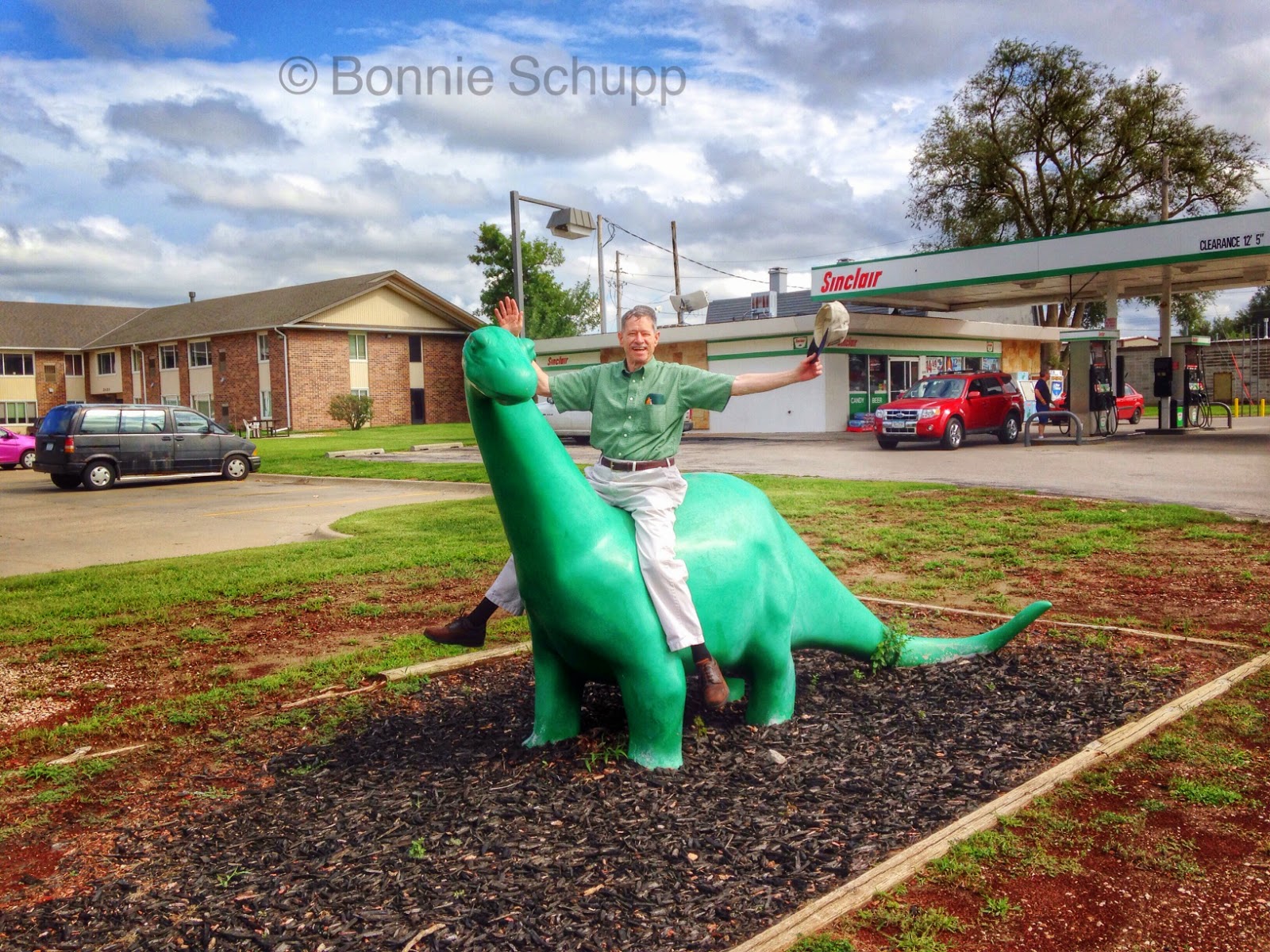 Then it was across the border, past Omaha and the towns of Fremont and tinier places (like Rogers, where the signpost cites a population of 82), until we saw the inevitable beckoning of a place to see: David City. Would you believe, more photo ops?

Life on the road is so sweet! 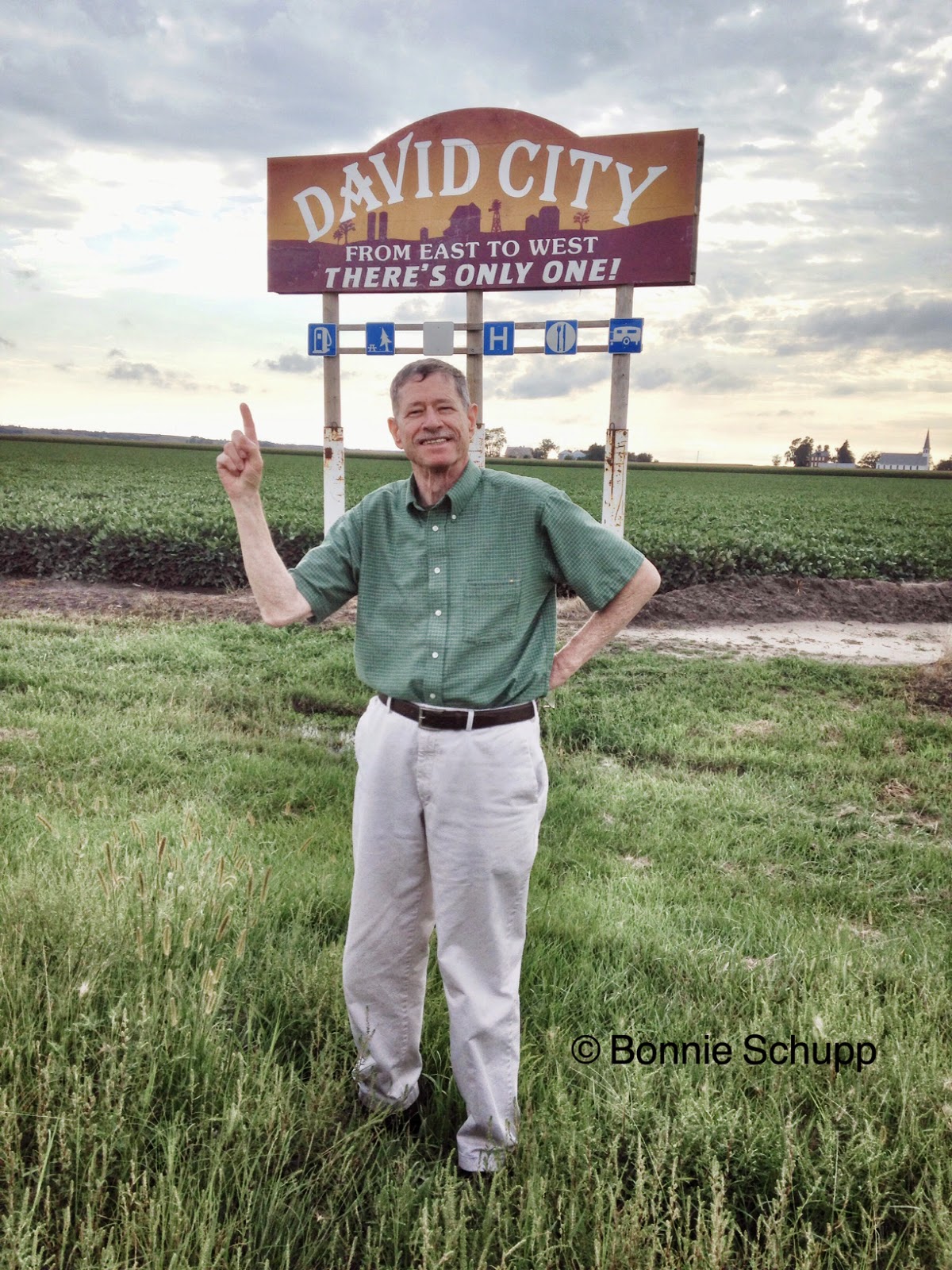 Coming up next: A Meaty Adventure