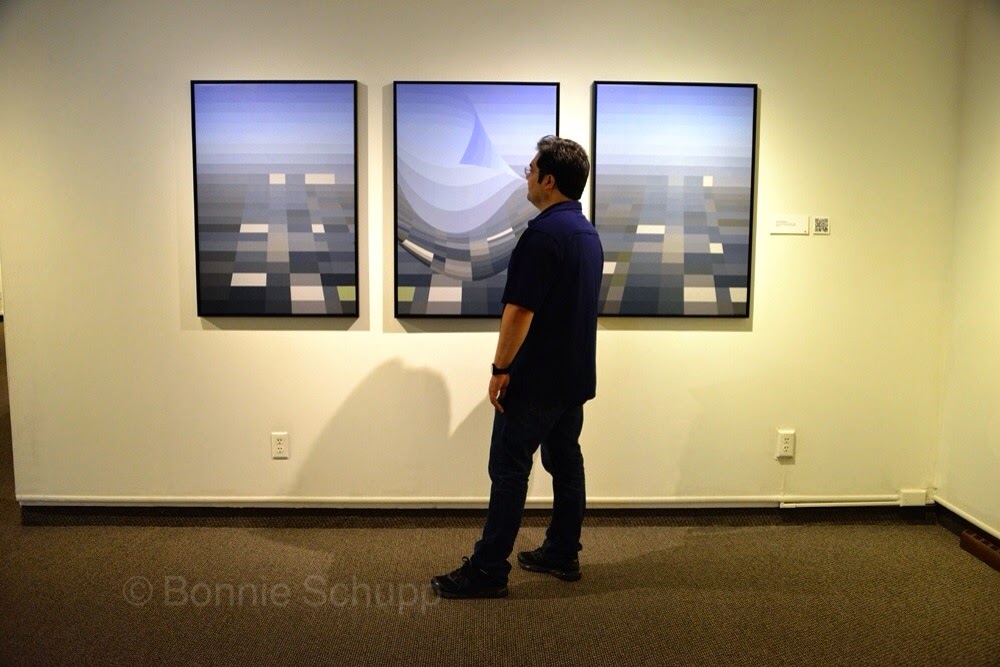 Petronio Bendito, with his three-panel rendering of New Orleans' Katrina disaster; and (below) the artist with his response to Haitian earthquake. (Photos by Bonnie J. Schupp)

Turning darkness into light:
Responding to tragedy through art


LAFAYETTE, Ind. – Petronio Bendito renders scenes of horror into art. Images of the aftermath from tornadoes, tsunamis, earthquakes are analyzed to create color palettes, and from this digital tray of paint strips the Brazilian-born artist creates powerful abstract imagery.

The shaking of buildings in 2005 in Pakistan becomes shimmering bands of ribbon in dark and light shades of collapsing concrete. The various-color  uniforms of an international group of rescuers surround the brown of the skin of a child being pulled from rubble of a Haitian earthquake in 2010. A man  carrying a child through floodwaters in China, 2007, becomes a powerful cocoon of red. A ribboned wave, the heavily blue swirl of water, curls over the coast of Thailand. There’s the raging orange/red of flames of the Colorado Springs forest conflagration. A seeming teardrop symbolizies the rush of water over New Orleans during Hurricane Katrina.

Our  friend Petronio, who teaches art here at Purdue University, is why we have come to Lafayette. Bonnie met him through the International Visual Literacy Association, a largely professorial group she joined while working on her doctorate in communications design a decade ago at the University of Baltimore. He participated in her “Defining Ourselves” project with an answer so simple yet profound (“I am all that I love.”) that we drove here a few years ago for her to take his related portrait photo. We’ve kept in touch through Facebook, and spent a day with him in Baltimore this year when he was presenting a program on color and algorithms at a mathematics conference. He’s brilliant, to say the least.

W had talked about his natural disasters project – using photographs of disaster scenes as the basis for creating art – and wanted to see the entire display, hanging through early September in the Art Museum of Greater Lafayette.  (It moves  later next month to the Central Features art gallery in Albuquerque, New Mexico.)

Petronio received an Indiana Arts Commission grant for the project, but early on found the work emotionally troubling – three months into the project unable to continue because it was overwhelming. But with the encouragement of friends, some of them psychologists, he managed to keep going. He developed an understanding that what matters is how one responds to disaster and tragedy – because life goes on, even though changed. 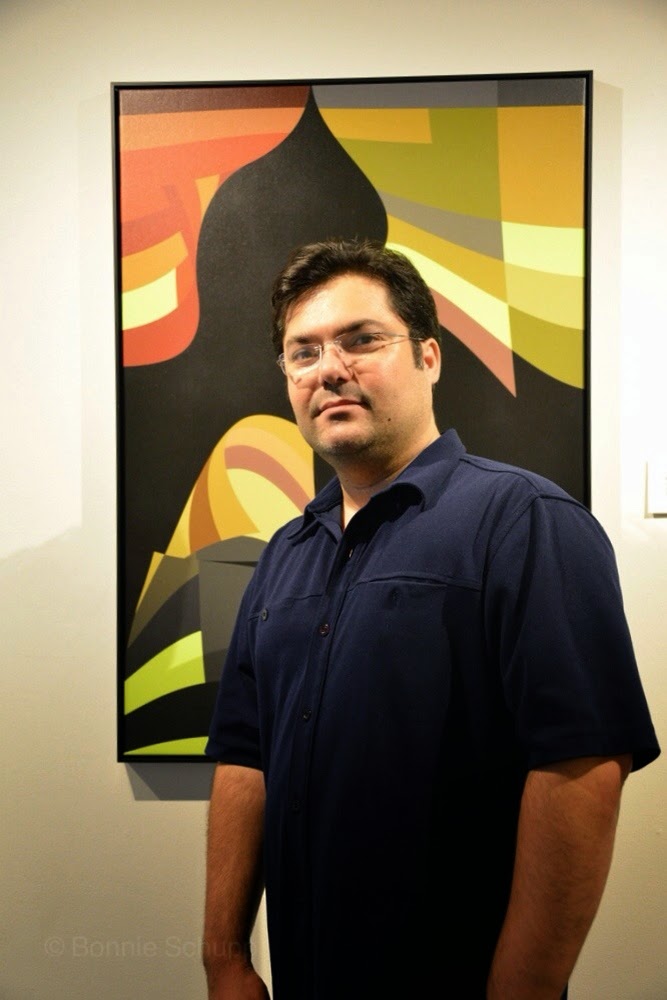 There is a glass case of the source photos next to the corresponding color palettes. And there are quotes on the walls, like this from Carl Jung: “I am not what happened to me. I am what I choose to become.”

And from author-motivator Leo F. Buscalgia: “There are two big forces at work, external and internal. We have very little control over external forces such as tornadoes, earthquakes, floods, disasters, illness and pain. What really matters is the internal force. How do I respond to these disasters?”

Buscalgia also is quoted: “Death is a challenge. It tells us not to waste time.... It tells us to tell each other right now that we love each other.”

And from an anonymous writer, the likes of whom are on seeming eternal proliferation through cyberspace: “You never know how strong you are, until being strong is the only choice you have.”

Petronio’s strength grew as he explored the world of tragedy, and says the lesson he took from it all was how he must respond – trying to improve the world in the aftermath, to heal.

One of Petronio’s observations: “Perhaps one of the greatest virtues is the alchemy of turning darkness into light, pain into lucid moments of reflections, loss into new findings and meanings.”

Also among the wall quotes, the artist adds: “The kaleidoscope of life gives us many color combinations, but we must pause to see them.”

Looked at closely, the art pieces are a journalistic distillation spun out in powerful arrays of color and motion instead of words.  Within his art lies great truth.

After our tour of the museum show, we split up for two hours – Petronio to deal with some matters of art and academia, while we explored Lafayette’s Main Street and found Jan Wright’s little shop of curiosities – First Class Clutter. Reminiscent of the eclectically surprising shops of used stuff and antiques in Baltimore’s Hampden and Fells Point neighborhoods, Clutter was almost as entertaining as Jan herself. She shared some of her collection of funeral photos – one of them showing a laid-out Al Capone – and, from her love of aviation, a few photos of the ill-fated Amelia Earhart taken at Purdue University. 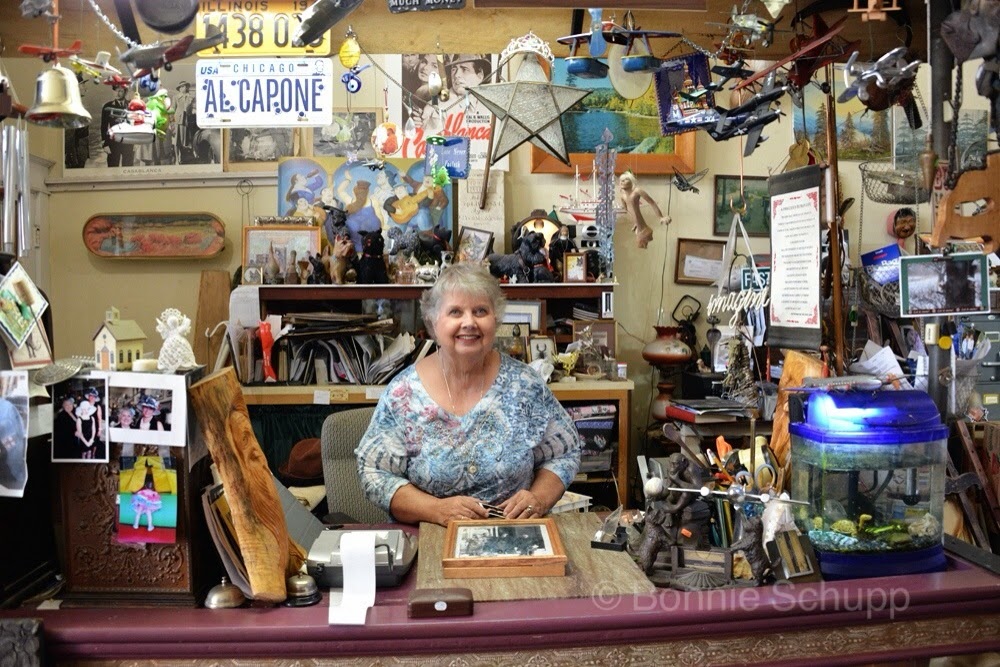 Planes hang suspended from the shop’s ceiling, sort of flying over the bric-a-brac of American civilization that’s piled on shelves or hanging throughout the establishment. Old dish sets, boxed silverplate cutlery, sheet music, vintage clothing, photos of mostly anonymous people once stowed in boxes or mounted in treasured family albums – faces out of time, yet timeless.  I could have stayed there for hours, but our time was more limited – dinner and conversation were waiting, with Petronio and his partner Bryan Bell back at their home.

Lafayette is a lovely place, but the best part of travel for us remains the people we encounter and get to know as friends. They enrich our lives.