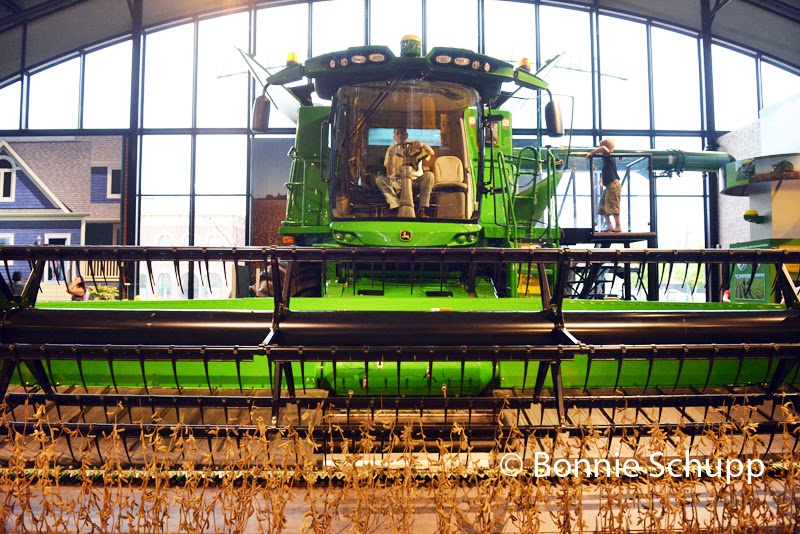 At the John Deere Museum in Moline, Ill, it becomes clear why this Ettlin (above, at the wheel) will never cut it as a farmer. (Photo by Bonnie J. Schupp)

CEDAR RAPIDS, Iowa – Leaving Lafayette, we crossed the border from Indiana into Illinois for lunch and a few hours of conversation with long-ago Baltimore Sun colleague Pete Wetmore and his wife, Marge – a result, in part, of Pete finally joining Facebook and our line of communication opening through cyberspace.

I hope that description amuses, seeing as how Pete was one of the architects of The Baltimore Sun’s early days in the development of computerized writing and editing systems. He was one of the newsroom wizards, as well as being a talented editor. And his departure from the newspaper a good quarter-century ago to move back to his Midwestern roots was an incredible loss for the newspaper. 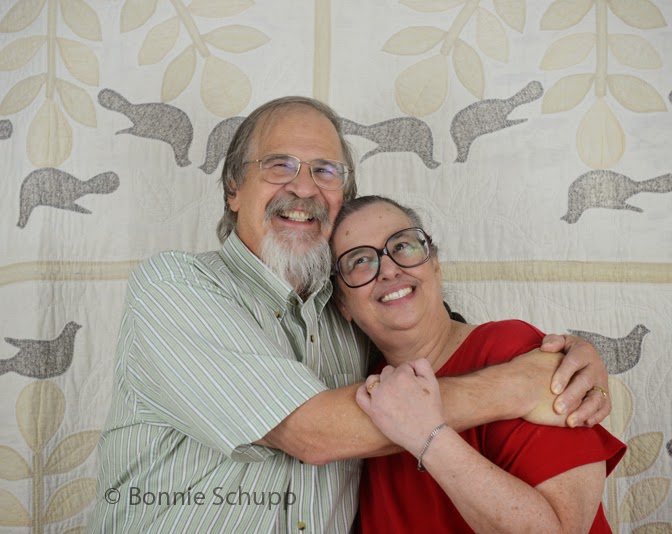 The Wetmore home in Urbana dates to around 1850, and likely was passed by Abraham Lincoln. Built in the foursquare style, It is one of the oldest homes there -- a survivor of an 1871 fire that consumed much of Urbana, the same year as the Great Chicago Fire. The fire began behind the property, Pete says, and the wind was blowing away from the house. It, the couple’s prized garden, and Marge’s extensive collection of quilts dating back more than a century are all pure Americana.

After bagels, deli and salad, Bonnie photographed the Wetmores for her slowly growing “40-Plus” project exploring the question of what glue (other than love) holds couples together 40 years or more. This was a little bit of a cheat, since they’ve only been married for a bit over 39 years. But it’ll be 40 or more by the time the project reaches the exhibition stage.

From Urbana, we headed for the interstates to whiz across Illinois and spend two nights with a former teaching colleague of Bonnie’s at Anne Arundel County’s George Fox Middle School – Jane Moberg Ladwig and her husband, Larry Ladwig. After her retirement, Jane had moved back to her Midwestern roots in eastern Iowa and, after her marriage to Larry, across the Mississippi to East Moline, Ill.  Both had lost spouses about the same time in the late 1990s, and met by chance on a golf cart ride along an area riverfront trail.

Jane’s background includes years spent as a nun teaching in Africa, in Tanganyiki (now Tanzania). Each meal in their home began with us holding hands while she would offer a prayer of thanks. We didn’t talk about religion, beyond noting that Bonnie is herself an ordained minister... through the online Universal Life Church. But in the minutes before we left them, Jane allowed as how we were quite different in our views but she was thrilled that we had come and shared time with them. And I noted my sense of place, in that we are all bound up together in a universe immense beyond comprehension. And Bonnie added, “Bottom line...we are all related.”

The Ladwigs took us on a tour of their so-called Quad Cities region on both shores of the Mississippi,  originally Moline, East Moline, Davenport and Rock Island, but now with a fifth, Bettendorf. But they haven’t changed the name to become the Quint Cities – apparently that just didn’t sound right.

Our first stop was the John Deere Museum in downtown Moline, where farm equipment ranging from early tractors to a giant harvester costing more than half a million dollars is on display. Much of it is open for kids to climb in and play farmer, as do at least as many adults. I played pretend in the cab of the giant harvester, and tried to ignore the 9-year-old kid waiting by the cab for his turn. There is a sense of wonder sitting at the wheel of huge machinery. You can even operate simulator versions of some of the big stuff, pulling the levers in front of video projections bordering on virtual reality.

The museum also had an operating robotic lawnmower -- sort of a Roomba for grass, guided by patterns placed around a property to avoid straying, or cutting down the wrong stuff. A sign noted it was not yet available in the United States, but it seems only a matter of time. The mower, the Tango E5, weighs 33 pounds, posing a question about how folks will keep the thing from getting stolen.

After a sandwich lunch in an old-time Moline soda shop, Lagomarcino’s, we crossed the river for a visit to Le Claire, Iowa, at the Antique Archaeology headquarters of the popular cable TV History Channel show “American Pickers.”

With sunshine breaking out after a rainy Friday night, the place was packed with tourists gawking at the odd and eclectic collection of stuff, much of it acquired from amid the junk people don’t throw away that is culled through on the program by its stars Mike and Frank. Neither was there – nor was my favorite, their assistant Danielle, although her sister Annie had stopped by. She looks and sounds much like Danielle, and seems to sport at least as many tattoos as her sister.

Annie happily went along with my suggestion that she play photobomber as Bonnie took a cellphone selfie of us. 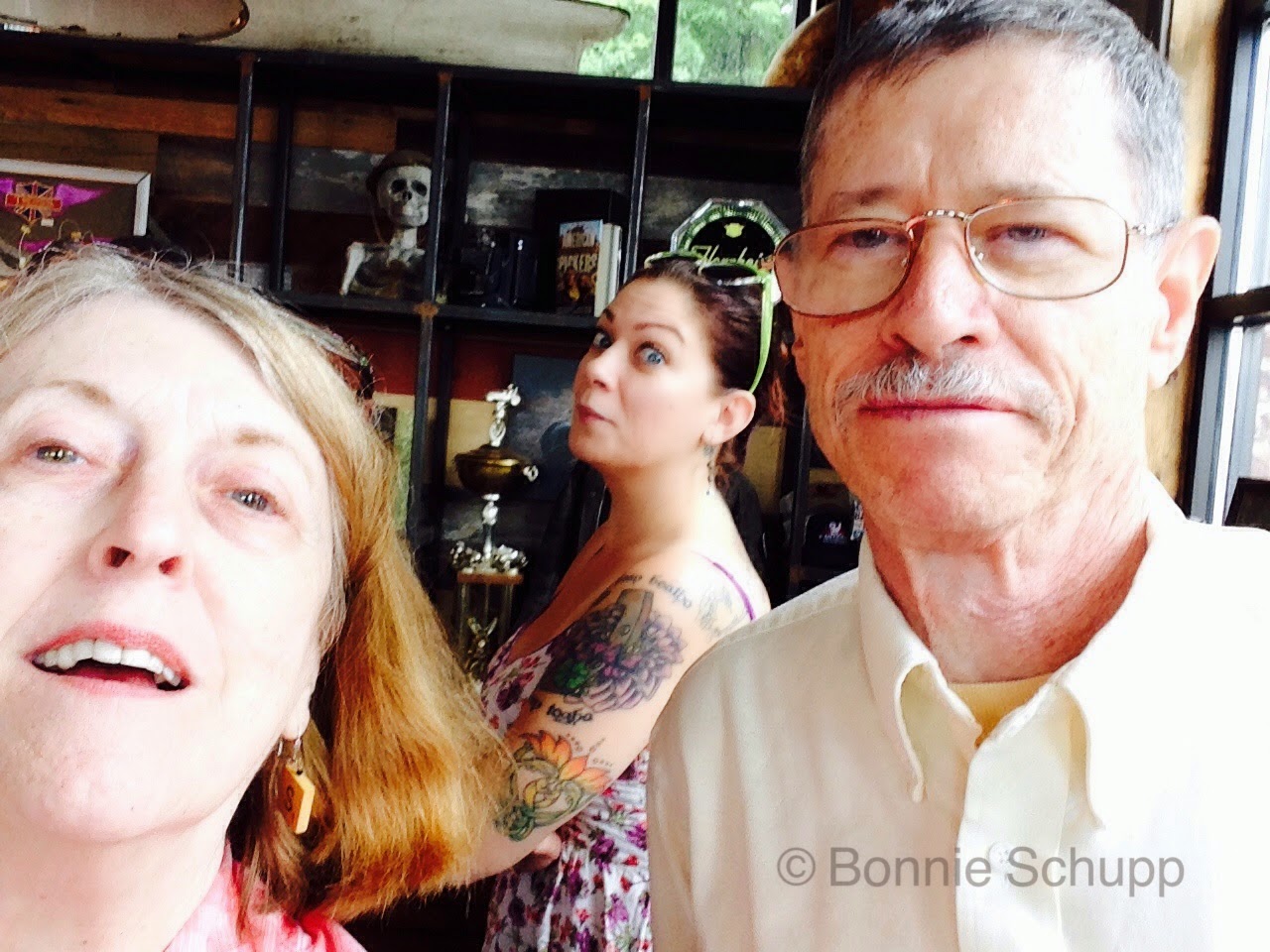 The show site attracts many bikers, particularly since Mike is a motorcycle enthusiast and collector. Outside, a couple of well-attired bikers, Adam and Joe, posed for photos – including a terrific one of Jane, sitting between them. (A similar shot of me will have a cameo appearance as my Facebook banner photo.) 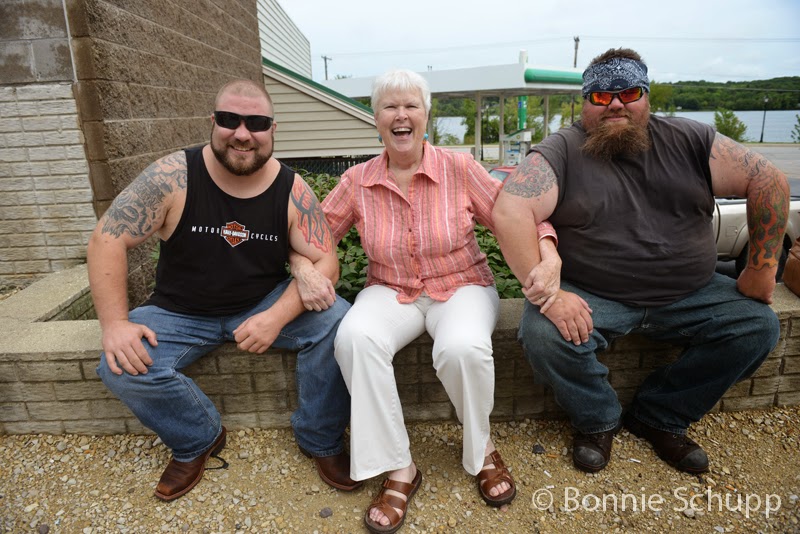 Jane sits between Adam (left) and Joe, while Annie (above) plays photobomber.

My only regret as we finished the afternoon drive was that the local minor league baseball team, the Quad Cities River Bandits, did not have a game scheduled until Sunday in their home, Modern Woodmen Park. Photos of their stadium interior look like a homerun hit hard enough could splash down in  the river.

Instead, on Sunday we bade farewell to the Ladwigs and set off for a few days exploring Iowa. Surely there was more than cornfields. And that’s how, on a meandering drive heading initially for Iowa City, we detoured to Maquoketa (Mack-o-keeta) Caves State Park. After hearing a required brief talk on the problem of a deadly white-nose fungus that is killing millions of bats across America, we rubbed our shoes on a sanitizing mat and headed down a series of steps to explore the few caves that are high enough to stand in and walk through. With temperatures outside rising into the low 90s and Baltimore-like high humidity, the caves were a breath of nature’s air conditioning. Trouble was, we eventually had to climb back up the steps to get back to our car.

Kids are not as picky. We saw some who had eagerly crawled through some of the low-passage caves and emerged slathered with mud. It was very slippery everywhere, though, from the water constantly dripping from the limestone formations. And it is one of the least-accessible places for the disabled that we have ever seen. (We can’t imagine how that could ever be affordably changed, given the steep, rocky topography leading to the caves. I can more readily see people becoming disabled trying to get through them!) Admission to the state park is free.

Leaving the caves, we found ourselves on country roads labeled as Grant Wood Scenic Byways – through the Iowa countryside that was the focus of much of the work of the famed American artist born in the nearby town of Anamosa. We looked without success for a recreated version of the house depicted in his famed painting American Gothic, but found a Chamber of Commerce office with exhibits including the seemingly endless parodies of its sturdy, deadpan farm couple with the pitchfork. There’s even an American Gothic clock on the wall with the faces of Barack and Michelle Obama. 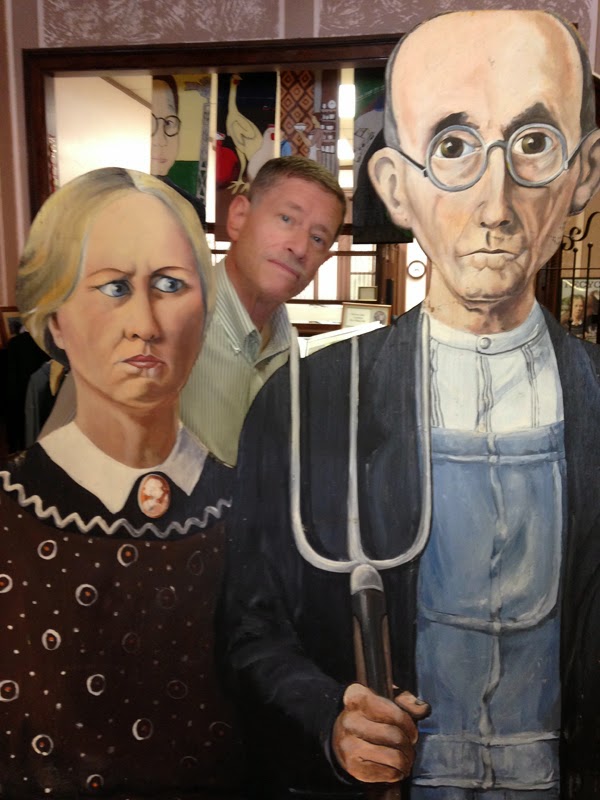 The volunteer on duty there in late afternoon was 78-year-old Jon Hatcher, a survivor of numerous serious illnesses in recent years and wearing a heart monitor that he said was connected to a site in Pennsylvania that would trigger defibrillation should his heartbeat become erratic. He snapped a picture of Bonnie and I putting our faces into a wooden cutout of the Gothic couple, and I posed as a photobomber behind a standing cutout of the farm couple. The building had been a bank years back, and Jon led us to its old Diebold safe, with a door so heavy you had to strain to open it – and two more locking doors inside it.

The nearby restaurant had already closed, and the closest place for food there was a McDonald’s – but Jon said if we rode four miles down the byway to Stone City, we’d find the General Store Pub. The food there is mostly fried, he said (“A little grease won’t kill you.”), but after 4 p.m. on Sundays it features open-mic entertainment. (“If they’re no good, they yank ‘em off the stage.”)

We arrived at the two-story building in time for a very nice bluegrass-style band, followed by the spirited a capella rendition of some old standards by 83-year-old Ruth Janey from Cedar Rapids, perched on the seat of her walker. I told her she reminded me of my Aunt Alice, who died late last year nearing the age of 107 – and how my aunt’s favorite song had been “Enjoy Yourself (It’s Later than you Think).”  Ruth closed her set of about eight condensed versions of the old songs with “As Time Goes By.”

Nobody offered a “Play it again, Ruth,” but she was warmly applauded by what seemed to be a crowd of mostly local folks. 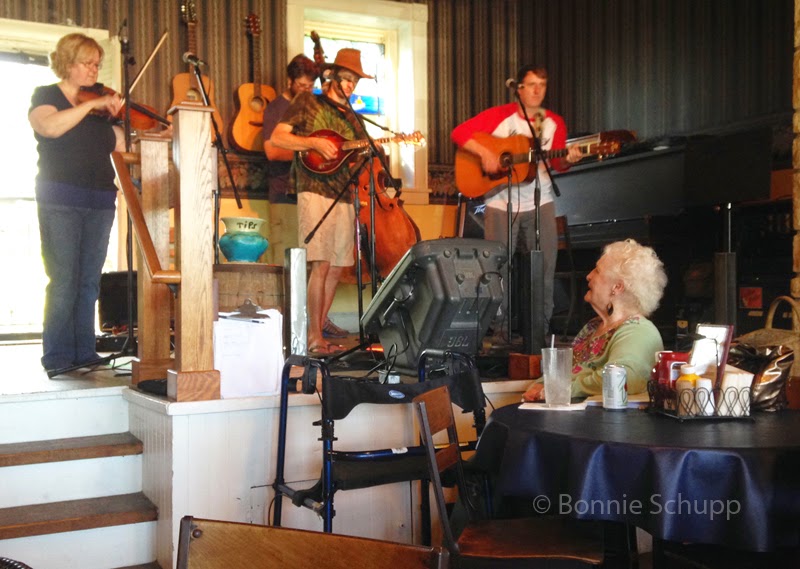 Ruth Janey listens to the bluegrass group preceding her performance.

After our dinner of deep-fried and somewhat overcooked chicken fingers, and a half-pounder supposedly grilled hamburger (but not the double-patty American Gothic version costing an extra $5, for which the menu says “you may need a pitchfork”), we were off to Cedar Rapids and another Holiday Inn Express. It wasn’t quite as nice as the amazing motel in Greenfield, Ind., and at 20,000 points I opted to pay for this one. The clerk said the rate was $129, and just a little less with our AAA discount. The reservation agent I was talking to at the same time by cell phone, from the lobby side of the check-in desk, made it $99. And we got the upgrade to a king room that, this time, lacked the mini-fridge and microwave.

But the motel was clearly an older property, judging by the condition of its furnishings, and the main lamp by the couch had a balky switch and a burned-out bulb. Our clerk found time to come by with a replacement bulb, however.  And we slept just fine after a good time on a hot day along some blue highway.

AH! Sorry- I forgot to mention "Grant Wood" country in Iowa. That is very scenic all the way from Des Moine to Dubuque. Note the steepness of the row crops in the fields. Conducive to erosion. Wrong choice of crop.