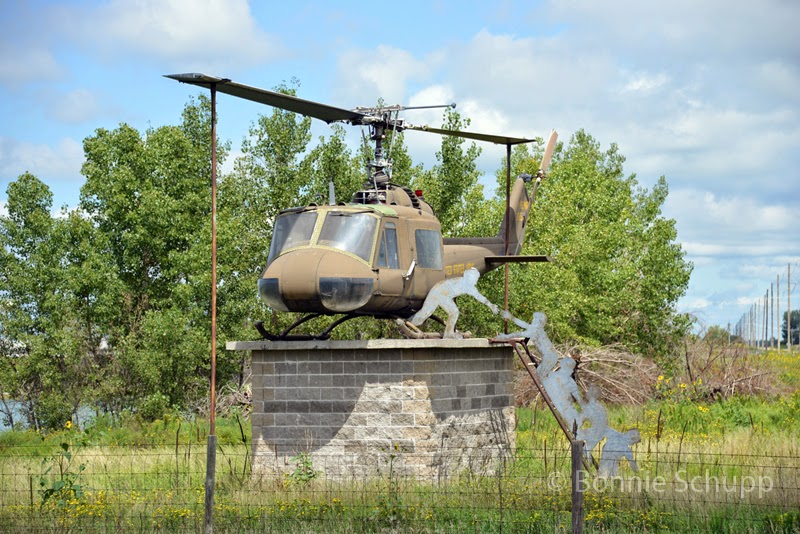 The Fall of Saigon, as seen from Interstate 80 in Lexington, Nebraska. (Photo by Bonnie J. Schupp)

LEXINGTON, Nebraska – The last helicopter out of Saigan catches you by surprise, the sight of a helicopter atop a platform where a figure with hand outstretched reaches for those fleeing in the last moments of the Vietnam war. And it’s in the middle of Nebraska, of all places.

Just off Interstate 80, about a quarter-mile east of the Lexington exit, the display is part of the collection of the Heartland Museum of Military Vehicles. There’s about two dozen military vehicles and pieces of equipment baking in the sun, and rusting, outside a warehouse-size building filled with the stuff of military history dating to the first world war. 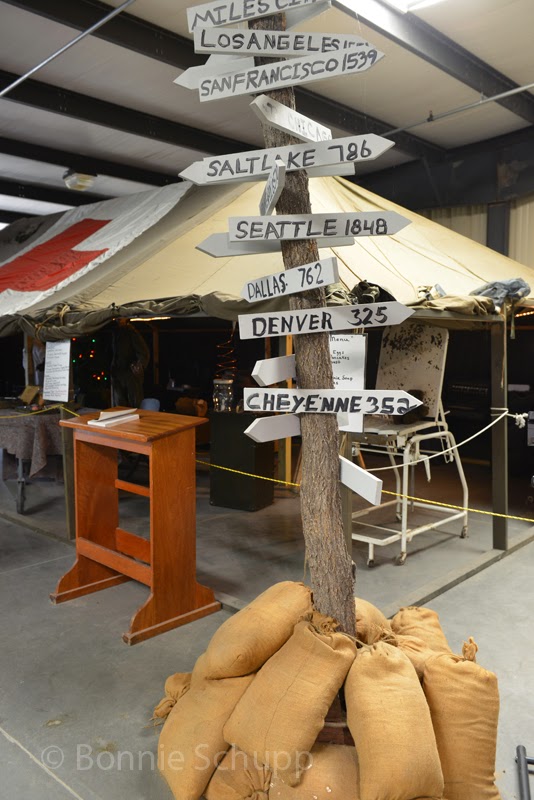 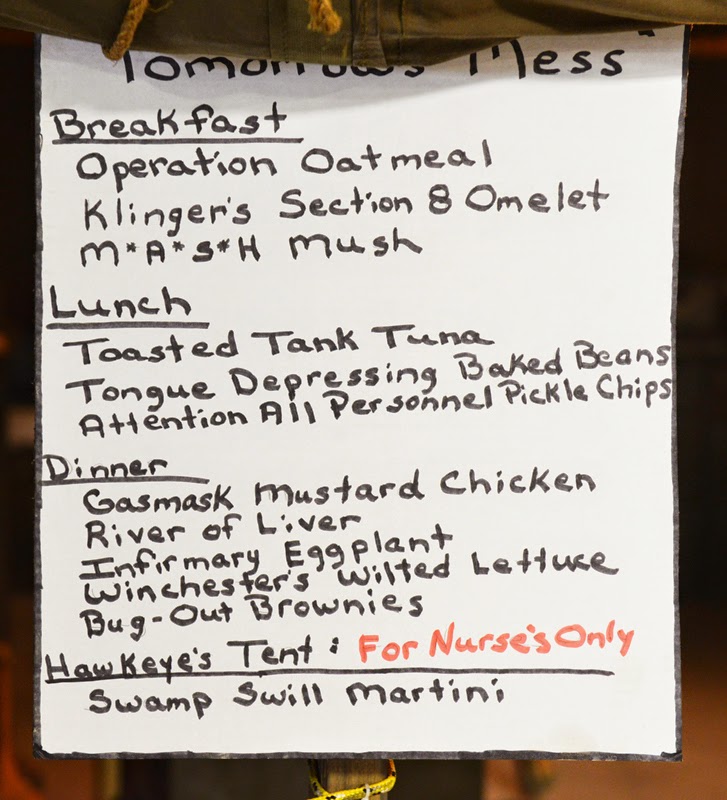 Helicopters, jeeps, ambulances, trucks, armored personnel carriers -- the hardware of war – fills nearly all the floor space. There’s even a large Korean War-style MASH tent --  Mobile Army Surgical Hospital – depicting the setting of the legendary television program M*A*S*H* that put the acronym into the mainstream vocabulary. A posted menu offers some tongue-in-cheek dishes.
Our guide through the museum is one of the volunteers, Gary Gifford, himself an Army veteran of Vietnam. He points out the most unusual pieces, like a restored troop truck built shortly after World War I, and a helicopter still in flying condition. Many of the pieces could run, and some have participated in parades, he noted. 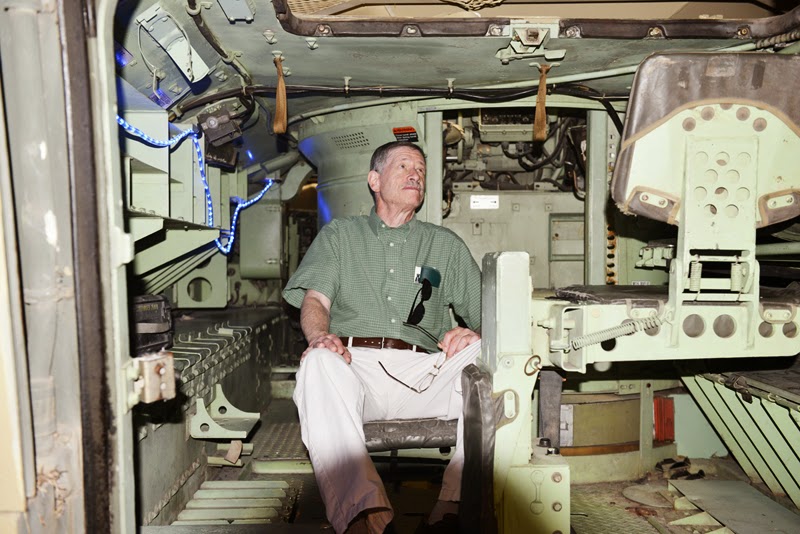 He led us to the backside of a combat tank, where visitors can clamber inside, take a seat and imagine how hot soldiers must have been when riding in one. It’s not like chilling in an air-conditioned car set on cruise control. It is among several pieces in which visitors can sit or climb around. Another is a former Huey gunship helicopter.

There is an open area in the building where local Veterans of Foreign Wars meetings take place, and a large display of tri-folded American flags – presentation flags from the funerals of veterans, customarily handed to the next of kin. The flags had formerly been housed in a veterans club that closed, and they were moved to the museum. Each of the stacked, triangular wooden cases has a name tag. They are the real centerpiece here.

Admission is free, but donations are welcome – along with grants, they are a major source of funding for the museum.

Interstates will get you there fast, but most often it’s the blue highways that bring the best smiles.

Getting off I-80 in favor of the two-lane asphalt ribbon of State Route 30, we rolled into the town of Gothenburg – home to a surviving station of the storied Pony Express. The station was moved to the site, now part of a pleasant town park, in 1931 from its original location along the National Historic Trail route of the daring, perhaps foolhardy,  riders.

It was a business that lasted only about 18 months, providing a means of communication between Missouri and California through a relay of mail delivery riders -- an early example of how quickly technology can render a business obsolete. In this case, it was the telegraph.

But the little museum/souvenir shop operating inside the restored station, and a silhouette rider a few steps from the building, help keep the romance of the Pony Express alive. It also sells lots of books – and (hint, hint) could use some more copies of our friend Chris Corbett’s book, “Orphans Preferred: The Twisted Truth and Lasting Legend of the Pony Express.” It was sold out.

As we continued westward on Highway 30, enjoying the sight of millions of black-eyed susans (also called wild sunflowers out here), the blaring horns of trains hauling mega-tons of coal eastward, passing an occasional abandoned homestead fallen into ruin, we came upon a large stuffed animal gorilla and dog sitting side by side on a bench, mounted atop a pair of old utility poles in the rural community of Paxton. 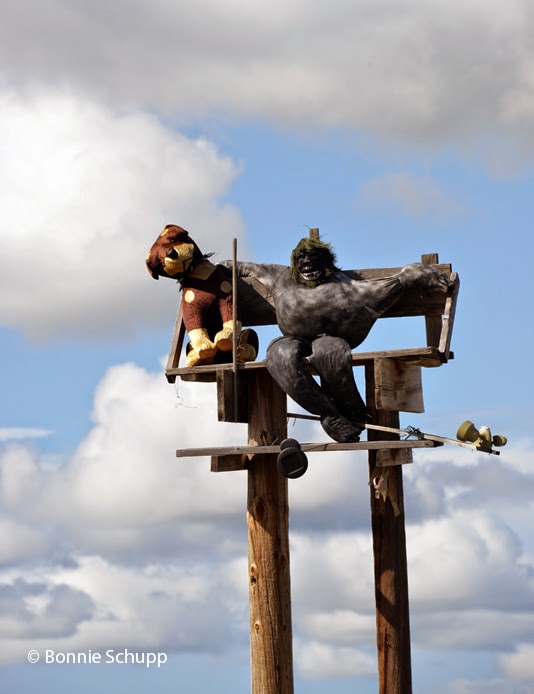 The sight was worth stopping and turning around, to admire the whimsy and wonder at the why. I steered onto a dirt lane and drove between fields of tall corn in search of the folks who lived there. But no one seemed to be home when I rang the bell – only a curious pooch that popped through a little doggy door onto a side porch, with nary a bark.

The roadside mailbox bore the names of the folks who live there, Randy and Cher, and if I manage to contact them I’ll update this yarn with their explanation. In any event, thanks for the laugh!

Loving all your reports from the road!