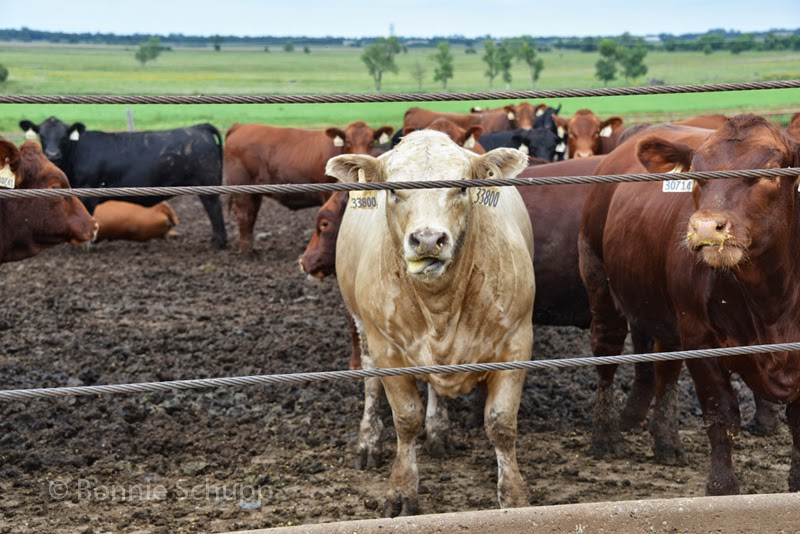 
Big Government has a stake


in making your steak tender

CLAY CENTER, Nebraska – Some folks take a trip go to the beach, some to the mountains. But Bonnie and I go for the strange... like this week, for instance. We toured the U.S.  Meat Animal Research Center.

It’s not for everybody’s taste, this 35,000-acre spread in mid-America (or, if you’re from the Baltimore area, think of it more as the Middle of Nowhere, a good 25 miles south of Interstate 80). From what Bonnie found in surfing the Web for the places most folks don’t go, most of its visitors are in the agriculture and ranching business.

Complain about big government all you want out here in the extra-rare Red States, but if you’re raising cattle, sheep or hogs, the folks who work at MARC (not to be confused with the Maryland rail commuter acronym) are helping you. Its staff of scientists and technicians are conducting experiments to determine the best strategies and genetics to grow  meat animals efficiently – what and how much to feed them, when and how best to breed them, how to assure the birth of the hardiest calves, lambs and piglets, and what practices produce the most tender meat.

Sorry, PETA. As I’ve said before, I love animals... some of them especially so, medium rare.

I know, PETA pals – it stinks. And this place stinks. There’s enormous amounts of manure, and it is managed almost as closely as the animals. It fertilizes thousands of acres of fields growing government corn, soybeans and alfalfa for their feed.

The facility is named for Nebraska’s late U.S. Sen. Roman Hruska, a conservative Republican, and this year marked the 50th anniversary of the congressional act approving the transfer of the property – formerly a naval ammunition depot – to the Department of Agriculture. It opened during the Nixon administration.

We showed up at the administration building unannounced about 2 p.m. on Wednesday, Bonnie noticing only minutes before our arrival that reservations for tours are requested. But after pulling into one of about three visitor parking spaces, we were warmly greeting by a receptionist in the lobby, filled out a visitor registration form, and had to wait only about 10 minutes before a guide was found to give us a private tour.

One problem is that visitors cannot drive or walk unescorted around the huge property and its many dirt roads. So we climbed into the dusty old work truck next to veteran cattle manager Wayne Rademacher, who allowed as how this was the first time he had given such a tour.

We city slickers got a 90-minute education on how calves are tagged with a computer chip within 24 hours of birth, and tracked over the course of their lives. What, how much and when they eat are tracked with precision. There’s separate grazing pastures for first-time mothers and second-time mothers, feed lots for cattle awaiting slaughter, and a relatively good life for the cows lucky enough to survive as long as 13 years in government care.

Wayne drove us into the doorway of a million-dollar shed where cattle come in for measured feedings – and know which of the long line of stalls is for them. Herds learn, when a gate is opened, to move from one pasture to the next in a planned rotation to assure healthy growth of grasses. “They know they’re moving to a better place,” Wayne said.

A curiosity across much of the property is the sight of hundreds of turf-topped bunkers made of thick concrete that were formerly used to store naval weaponry, including missiles. Some are used for storage, our guide said, but most appear to be empty. He said three take up the space of about an acre, and removing them would free up more land for the agricultural side of the operation. But that would also be expensive. So they dot the landscape for miles around.

In a satellite view Bonnie got through a cell phone app as we were driving away, the bunkers we passed were largely invisible. (Technology is amazing, that you can follow your own passage on a highway as a moving dot across satellite imagery.)

The center has about 7,500 cattle and 1,500 sheep, Wayne estimated. I forgot to ask about the hog population,  but an informational packet handed to us at the administration building put the number at 400 sows. There’s even a corps of dogs to keep the sheep in line, and discourage coyotes from making them dinner on the hoof.

Wayne has been working there more than 20 years, managing cattle as a Nebraska state employee. The animals were owned until recently by the state government, but now are federal property.

A few hours after our tour, we stopped for dinner. We ordered steak. Thanks, Uncle Sam!

Earlier in the day, we stopped in the town of Aurora to visit a small but excellent museum called the Edgerton Explorit Center, named for the inventor of, among other things, the Stroboscope that enabled photographers to capture images never before possible such as a bullet in flight.

Harold Edgerton – or Doc, as he was known – was a native of Aurora who went on to become a professor at the Massachusetts Institute of Technology, a friend and scientific participant in undersea exploration by Jacques Cousteau, and even photograph one of the early atomic bomb tests. He died in 1990, at age 86, and six months later his native community decided to establish the place in his honor where children, especially, could learn and be inspired to explore possibilities in science and technology.

Admission for seniors is $5, and we did our best to act like kids – playing with its hands-on exhibits, even with toys in the gift shop, and marveling at the accomplishments of Doc Edgerton. Money  well spent!

Before we leave Nebraska, I wanted to share one of the thoughts I posted a few days ago on Facebook (the lazy version of posting a blog), about the religion-based sentiments on display along the roadways of the Iowa and Nebraska flatlands:

Talk about flat! Some roads are so flat, the anti-abortion billboards can be seen from half a mile away. And with the placement of some billboards, it appears that Jesus walks on corn.

There was even a cross spotted on the edge of a cornfield adjoining the driveway into an Adult Superstore hard by Exit 159 of Interstate 80 in Iowa. 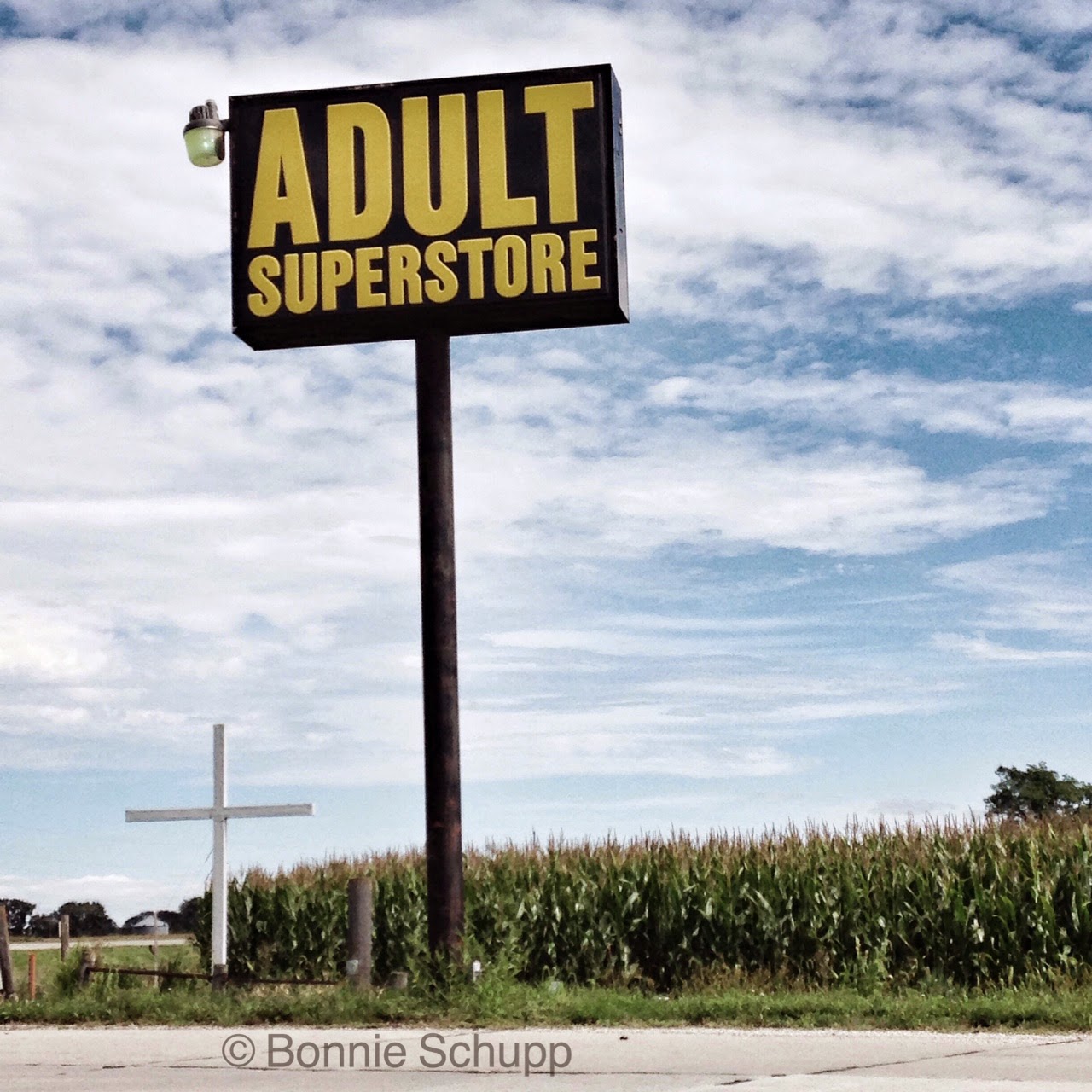 Laugh all you want, but I swear that corn was higher than the crops we’d observed for miles coming and going, so to speak. We suspect the cross was a response by a local farmer to the presence of the adult store, but it seems likely it only attracts more business.