Circus taking down the tent 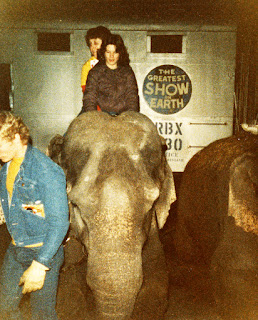 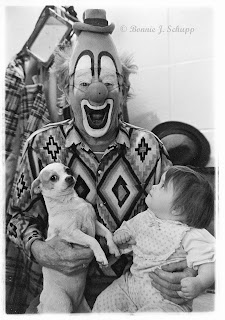 Bonnie and daughter FL mounted and ready (top), and Lauren with Lou Jacobs and Knucklehead.

Memories of Ringling Bros.: Elephants,
clowns, and the owner who bought it twice
It will be hard to say goodbye when the "Greatest Show on Earth" strikes its tent for the final time this year -- well, not really a tent, since it has been playing indoors at civic arenas for nearly 60 years. But you get the idea.

The Ringling Bros. and Barnum & Bailey Circus is dying. Its owners announced over the weekend that the show will end its 146-year run in May, a result of changing tastes in entertainment and, in large part, the animal rights movement that sent Ringling's elephant herds into retirement last year.

For the better part of two decades, I looked forward to the annual spring arrival of the Ringling show in Baltimore. I covered it as a newspaper reporter beginning around 1971, thanks to an offer by the late Martha Schoeps, then the Baltimore Sun features and food editor, for me to attend opening night and  write about the show.

Oddly, my story got the attention of circus owner Irvin Feld, who invited me and my first wife to see the other Ringling show when it opened at the Washington coliseum a month later -- after dinner in his family's D.C. penthouse. (There were two Ringling circus units then, designated Red and Blue, criss-crossing the nation on two-year circuits.)

Irvin, whose wife took her own life in the late 1950s, was living there with his two children and his brother and sister-in-law, Israel  and Shirley Feld. The brothers grew up in the Hagerstown area, and started their business career together in the Depression era -- selling snake oil-type remedies on the carnival circuit, according to family lore.

Their ventures evolved into the drugstore business, recordings and record sales and concert promotions that included appearances by the Beatles. And they managed arena bookings for the circus.

In 1967, with wealthy Houston Judge Roy Hofheinz as a partner, they engineered the purchase of Ringling Bros. -- maximizing publicity by staging the signing ceremony in Rome's Colosseum.

After dinner, Israel drove his wife and brother to the D.C. arena, and I tried to keep pace, following in my under-powered Renault as he whizzed around traffic circles and did his best to get ahead of red lights. We watched the show from the owners' front row-center seats. Clowns delivered hotdogs. Irvin pointed out favorite performers, and fretted tongue-in-cheek that the cat trainer was going to "get eaten" some day.

That was the Irvin Feld I knew. Whatever underlying family secrets existed then, and came out later amid ugly legal battles between his heirs and other litigation, were not part of the equation. And I became  more interested in the circus performers, their family stories, and the view from backstage over the ensuing years.

A year after that dinner, accompanied by my first wife, I tried out elephant riding for the first of several such adventures as the Ringling menagerie was paraded  about two miles from the circus train to the downtown Baltimore Civic Center arena -- an experience later enjoyed with varying degrees of nerve and distance by third wife Bonnie and older daughter FL. (Chesapeake Bay Middle School did not consider riding an elephant in the circus parade to be an acceptable excuse for her lateness that day. Meh.)

I got to meet and write about Lou Jacobs, the great clown who -- in his makeup -- became the face of the circus on a U.S. postage stamp (everyone else pictured on stamps had to die first), and Bonnie photographed our younger daughter Lauren sitting on Jacobs' lap with his dog Knucklehead. (In one of his routines, Jacobs was a hunter and Knucklehead, wearing bunny ears,  the quarry -- falling over "dead" at the pop of the rifle but leaping out the basket on the back of his bicycle as he pedaled out of the center ring.) Jacobs' daughter Dolly became a noted circus aerialist.

There was tiger trainer Charly Baumann -- later the performance director, timing each act from the entranceway to keep each show running like clockwork, overseeing the movement of animal herds, jugglers, acrobats and clowns as apparatus was moved in and out, trapeze nets raised and lowered, and manure swept up by roustabouts, to the beat of the circus band and cues of its conductor.

Another great was Gunther Gebel-Williams,  the blond-haired showman whose entire Circus Williams was purchased by Irvin Feld in 1968 to bring him and his performing family to America. He staged acts with elephants, tigers and horses as the star of the Ringling Red Unit. (He died of brain cancer in 2001.)

And there was Michu, billed as the world's smallest man, whose "marriage" to the purported world's smallest woman played out in every performance as a center-ring spectacle for a two-year run of the show. (I gathered that the bride was not terribly fond of the groom, who, I recall, was fond of drink and cigars.)

We attended shows in Richmond and Norfolk, Va., just before the circus would arrive in Baltimore, Bonnie taking photos that ran in The Evening Sun and accompanied my reviews in the morning newspaper. I would attend opening night in Baltimore, ready to tweak the review already being put on the press for the early edition, in the event anything unexpected happened.

One opening night, in 1979, it did -- a Hungarian aerialist was injured in falling about 20 feet to the floor from a neck loop suspended from her husband's teeth. An emergency alert from the band sent clowns into action in spotlights aimed across two of the performance rings, while paramedics rushed into the darkened center ring to get Ava Takacs to a nearby hospital.

In March, 1985, we bought a bunch of tickets so younger daughter Lauren and some of her first-grade  classmates could celebrate her 5th birthday at the circus. The whole group of children was escorted from their seats to ride in a float in the first-half-ending pageant known as the "spec."

The circus became part of the Mattel toy company in a 1971 merger valued at nearly $50 million, and a little more than a decade later the Feld family bought it back for barely half the price -- along with an entertainment division that included ice shows and the famed Las Vegas magic act of Siegfried & Roy.

"Let's face it," Irvin Feld said at a glitzy announcement of the purchase, "the good Lord never meant for the circus to be owned by a big corporation." He brought showgirls, clowns, a marching band and an elephant to his headquarters on the edge of Washington's Georgetown section for a touch of showmanship that day.

For all his business acumen in building the entertainment empire inherited by his son Kenneth, Irvin seemed to truly love the circus. The day he bought it back from Mattel, he said he wanted to preserve the circus for future generations of his family and America.

Irvin died in 1984 of a cerebral hemorrhage suffered in Venice, Fla., where he had attended a memorial service for longtime Ringling monkey trainer and star performer Mickey Antalek. I remember a beautiful wagon wheel floral tribute at his funeral.

Alas, his dream of a circus tradition enduring for generations is falling a little short. The end of the storied Ringling Bros. and Barnum & Bailey Circus was announced by two generations of Irvin Feld's family -- son Kenneth, and one of three granddaughters, Juliette Feld, the chief operating officer.

If I'm lucky, I hope to see some of the surviving Felds in April -- during the show's last stand in Baltimore, maybe in the section where I fondly remember sitting with Irvin... about 20 rows up, facing the center ring, close to eye level with the showgirls who were riding by on the elephants.
They were waving at us, and the crowd, and I always waved back.

And at the end of the show, there was always the ringmaster's farewell: "May all your days be circus days."

Thanks to your introducing me to a Ringling Circus person, Parris, at your Toad Hall Halloween party in 1978, I was able to spend Christmas Eve and Christmas of 1978 on the circus train parked in Venice FL.
Among many great memories was meeting Alice from Dallas, her man Dan, and Raoul. They invited me to stay a few days.
On a tour of the grounds one of the trainers took me on a shortcut through the elephant barn. We walked in the narrow walkway between the back of the elephants and the barn wall. Had one of them decided to take a step backwards I probably would not be here to tell this tale. The power of those animals is something like how you feel standing on the edge of a freeway while 18-wheelers go flying by.