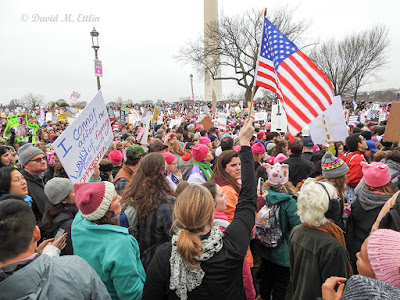 of the Trump Resistance

Half a million strong, hear them roar in the Women's March on Washington


WASHINGTON, Jan. 21, 2017 -- We are walking slowly near Ground Zero of the Trump years, at the low end of the National Mall directly across First Street from the Capitol. The thick, white plastic flooring put down to protect the grass is decorated with the rainbow of more than a dozen wet, abandoned ponchos. 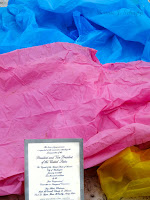 Nearby, I find a damp invitation: "The honor of your presence is requested at the ceremonies attending the Inauguration of the President and Vice President of the United States." It is the ticket for entry to the "silver" section of the Mall "standing area" and advises, "Please Arrive Early Due to Large Crowds."

It is little more than an hour past dawn on Day 2 of the new administration, and Day 1 of the Resistance.

We had awakened before 6 a.m., to assure parking at the D.C. Metro's suburban Greenbelt station -- the end of the Green Line -- and arrived about 7 a.m. to find half or more of its 3,999 spots already filled. The system had opened two hours early to accommodate the anticipated crowd for the Women's March on Washington. We joined the flow of people passing through the entrance and turnstiles, and were directed past filled passenger cars to the back end of the subway train. 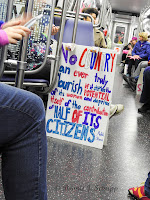 The mood was happy, mostly women aboard and many holding signs for the march that was expected to draw a crowd of 200,000 -- but dwarfed expectations. Our car reached standing room after the first stop en route to the city. We emerged from the Navy Memorial/Archives station to a misty, gray morning that would never see the sun.

Navigating the area on foot was no problem; no map was necessary. We just followed the crowds homing in on the intersection of Third Street and Independence Avenue,  where the rally was to begin at 10 a.m. with speeches and music.

We took evasive action to skirt the crowd and found ourselves on the Mall and facing the grandstand set up outside the Capitol for the Trump-Pence inauguration. It was still decked out in the red, white and blue glory of flags, banners and bunting from the rainy day before. 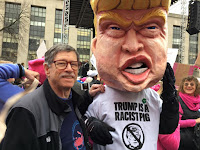 Rounding the Smithsonian's National Museum of the American Indian, we reached the side of the stage set up for the rally about eight bodies back from its perimeter fence. We were nearly two hours early, but the mood was already being set. A woman was exhorting early arrivals to stand with their signs next to a man wearing a giant Trump head and tell him their grievances.

Signs were everywhere to be seen -- some with low-key expressions of defense for women's rights, family planning, immigration, love and understanding, but others crude and pointed in their disdain and anger.

"If I Want the Government in My Vagina, I'll Fuck a Senator," one declared. "Pussies Against Patriarchy," read another. And there were the likes of "Peein & Putin," "Don't think about grabbing my human rights," "Prosecute sexual assault of the Predator-in-Chief," and "Lock Him Up." 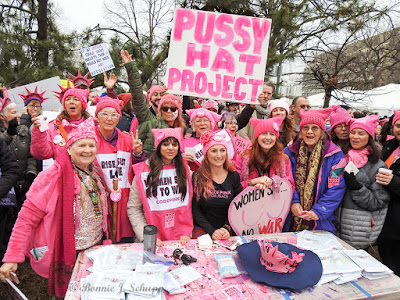 From a table behind GiantTrumpHead, women were handing out free "pussyhats" -- the knitted hats with little kitty ears that have become a signature of the female opposition to the new administration. The work of a group effort through The Pussyhat Project, each was packed with the name of and a note from its volunteer maker. 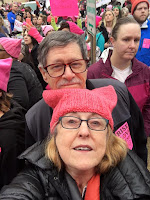 Bonnie managed to get a hat before they ran out, the demand far exceeding supply. (The maker, Danna Myers Hook in Reno, Nev., included on her enclosed note a women's issue she cares about, saying, "I want my girls to know they are not alone! We all need community!")

But thousands of people had brought their own pussyhats and made up a bobbing wave of varying tones of pink in the sea of people.

From our vantage point near the stage, we could barely see the arriving dignitaries, but recognized activist-feminist writer and Ms. magazine founder Gloria Steinem as she walked up the stage ramp, a red scarf around her neck.

We had no idea then of the magnitude of the still-arriving crowd. But we could hear them roar -- a shout that would begin somewhere in the mass of humanity and spread like the wave of hands across a stadium.

Unable to see the front of the stage or clearly hear the opening speakers, we wedged our way for about 10 minutes to get through the packed crowd behind us back toward the lower end of the Mall. 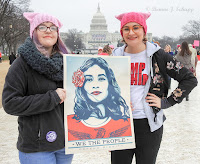 It was about 10:30 a.m. The Mall was filling up. For most of the people, the stage show had become irrelevant. The Women's March had become about the people themselves, and they grew in numbers beyond comprehension.

Best-guess estimates numbered it at half a million. There was no way to tell. By early afternoon it had filled most of the Mall's plastic-covered center, stretching half a mile back from First Street toward the Washington Monument, whose upper third was invisible in the low gray sky. 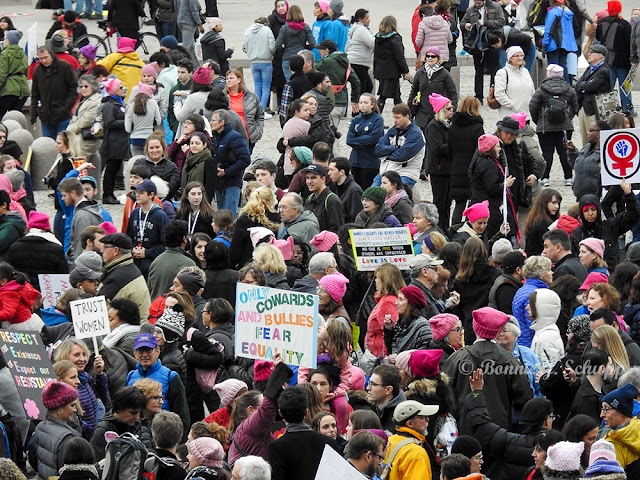 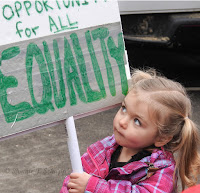 We walked, admiring the signs, for two hours. Some people carried babies; a girl about 3 years old carried, with parental assistance, an "Equality" sign. There was a dog wearing a vest bearing the message, "Even I don't grab pussy." (Its people assured us the dog also was not a crotch-sniffer.) 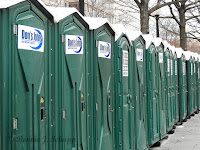 We paused for half an hour to sit on a floor, unwind and warm up a little inside the National Gallery of Art. Many sought indoor toilets there, since the outside facilities (including those from a company called Don's Johns, whose name was covered up on some because of the similarity to that of President Donald John Trump) had not been cleaned or emptied. Close to a hundred people stood waiting. And a line at least of a tenth of a mile long snaked through the lobby of people trying to pass through security and leave the building.

Word spread from those following news accounts online that the formal march had been canceled because of the enormity of the turnout, but it was supplanted by spontaneous actions as uncountable thousands objecting to the nation's 45th president moved slowly along the Mall and its perimeter thoroughfares of Constitution and Independence avenues toward the giant white obelisk memorializing the nation's first. It was a surreal scene encompassing 228 years of American history, for good or ill.

At times, the flow stopped and people, pressed pretty much against each other, were unable to move because the crowd was so densely packed. Eventually, we reached the end of the Mall near the Washington Monument grounds, and tried to walk up 15th Street from Madison Drive. Ahead of us, we could see a throng appearing just as thick for blocks ahead. 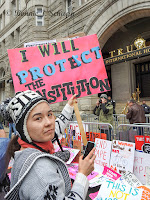 We took evasive action, walking against the flow of yet another mass of humanity on Constitution Avenue and then up 12th Street where we encountered another surreal scene -- outside the Old Post Office recently reopened as the Trump International Hotel.

A security fence between the sidewalk's edge and a side entrance had been adorned with several hundred signs left by marchers -- much like flowers for the dead at a war memorial, but as derision rather than tribute. For all the hostility and disdain those signs expressed, there was at least one that stood out with remarkable humor at the end of the barrier: "I Heard There Would be Wine." 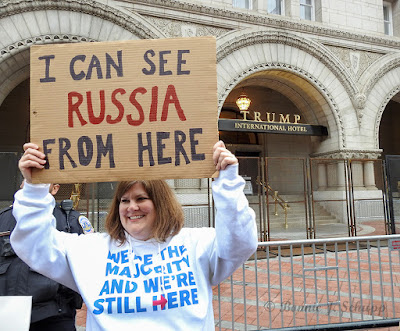 On the front side of the hotel, marchers filled Pennsylvania Avenue close to 20 abreast and stretching beyond sight -- many "flipping the bird" with upraised middle finger as they passed the building. Two men sporting souvenir Trump inauguration T-shirts bearing his picture stood outside the fence watching the marchers, while Trump security guards and District of Columbia police officers observed from its inside.

Grandstands that had been set up for the inaugural parade, and shown during the televised spectacle to be less than full, were partly taken up by wearied marchers.

The flow of people on the main routes was still mostly toward the White House, but we never got there. We had already logged six miles and most of nine hours on our feet. We could only hope there were more waves of "the roar" -- so loud that the new occupants of "the people's house" would hear them.

It was after 4 p.m., and the sun still had not graced the day.

Only the people -- the "We" of the Constitution Donald Trump had sworn a day earlier to protect and defend -- had graced this day here and in cities across America, to say nothing of those who marched in cities across the planet, in numbers both remarkable and unexpected.

It has been close to half a century in America, back to the Vietnam War era, since so strong an expression of political dissent had been heard.

We are awakened. And another sun has risen, from within. 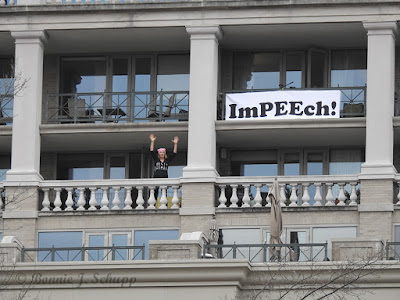 photo credits:  Top photo at the edge of the mall by David M. Ettlin; all others by his wife, march companion and art director, Bonnie J. Schupp.

Some notable captions: That's me posing with Big Head Trump, and with Bonnie in her selfie modeling her pussyhat. After the march and retrieving our car in Greenbelt, we drove back into the District of Columbia to visit our friend, the Rev. Darlene Kelley, pastor of the Clinton Street United Methodist Church in Kingston, N.Y., and prized student when Bonnie taught junior high English in Baltimore around 1970. Darlene, with five women friends from her bartending days in New York City, came to D.C. for the weekend to take part in the march. Bonnie gave her the pussyhat. We have since made email contact with its maker, Danna, who said she participated in the "sister march" in Reno and that it had about 10,000 participants.

I loved reading your account of the day! I can imagine the energy and excitement! Thanks for contacting me!

I enjoyed your description of the "Awakening" and also the posted photos. Wish I had been there!