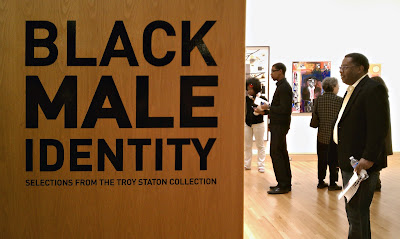 Troy Staton, at right, looks at a some of the works in gallery show opening at Stevenson University. (Photo by Bonnie Schupp)

is part of the Black Male Identity Project

Charlie Edwards has been a friend of Troy Staton since their childhood days in Baltimore’s historically black Cherry Hill section, and recalls him at age 14 -- cutting hair on the porch.

Three decades later, Troy is still cutting hair. But there’s a lot more to him than meets the eye at first glance.

Thursday evening, Stevenson University in the city’s nearly rural northwestern suburb celebrated another side of his life with the opening of a gallery show, “Black Male identity: Selections from the Troy Staton Collection.”

For years, Troy has been collecting the work of African-American artists and displaying it in his own gallery – the walls of the New Beginnings Unisex Barbershop on a corner across the street from Baltimore’s Hollins Market.

He’s a community activist, gives jobs to neighborhood kids, sponsors picnics, and subtly educates his customers about art. Children have visited art museums for the first time because of Troy Staton’s influence.

The Stevenson University show, featuring the work of more than a dozen terrific artists, continues through Jan. 6. I’ve seen some of them before, on the walls at New Beginnings. But this is the first formal gallery show for Troy’s collection. And Thursday night, he was beaming with joy at the experience amid a crowd of friends, family, and the university community.

He recalled the first time he began using the shop’s walls to bring art to the community, and feeling that “this is really something.” But seeing the artwork – representing about half of his collection – on the well-lit bright walls of a spacious university gallery was “incredible,” he said.

Both exhibitions are part of a series of area events in the Black Male Identity Project. Details can be found at its Web site, http://morethan28days.com.