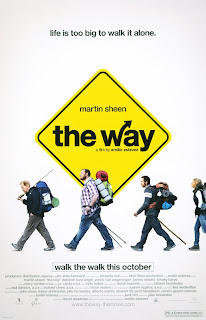 What can you say about a movie that pretty much plods along – and you’re sorry that its journey ends so soon.

“The Way” – produced, directed and written for the screen by Emilio Estevez, and starring his father Martin Sheen – is a wonderfully intelligent tale of a fictional father rediscovering a lost son and finding himself in a pilgrimage on foot of some 500 miles across the Pyrenees.

Sheen portrays Tom, a California ophthalmologist who had been unable to dissuade his 40-year-old son and lone child Daniel from a life of wandering the world. Then, interrupting a golf outing with a trio of medical pals, Tom receives a call from a French police official with news that Daniel had died in a mountain storm.

Tom cancels his appointments and travels to the town of St. Jean Pied de Port, intending to retrieve his son’s body. But when he learns that his son had died early in a pilgrimage known as Camino de Santiago – the Way of St. James – Tom decides on a whim to complete the journey himself, using his son’s gear and taking his ashes to place along the route.

Tom’s encounters on The Way add traveling companions, each with an avowed mission. But really, like Tom, they all are in need of discovering themselves. The cast includes Emilio Estevez as the son, mostly appearing to his father apparitionally.

Filmed along the actual route of the historic religious pilgrimage, from the French border town to the Cathedral de Santiago in Spain, “The Way” is a visual delight at every turn, and a reminder of the need to turn off the main road now and then and experience life more spontaneously.

There is no sex, no nudity, no violence, no car chase. The fastest moment is a foot chase.

Alas, no one under 35 is likely to love it as much as I did.

thank you for this, I was curious about it because I love the norht coast of Spain and the idea of pilgrimage, but was nervous about the cast.