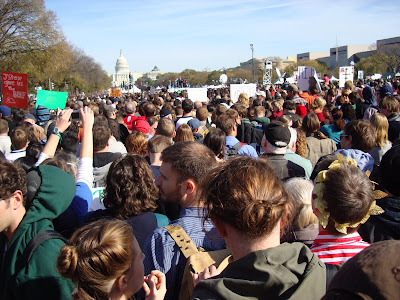 All the crowd's a stage at Sanity rally. (Photo by David Ettlin)

View from the crowd
at Stewart/Colbert rally

'Moderation in Defense of Liberty is No Vice'

We traveled by train to Washington Saturday for the Jon Stewart/Stephen Colbert Rally to Restore Sanity and/or Fear.

You might have seen us there, if you were looking down from a helicopter. We were the couple sitting on a bench near an oval of parked bicycles, close to half a mile from the stage.

But we didn’t see much of anything on stage. We were so far back, even the TV monitors and sound system set up for the nearly impenetrable crowd packing the National Mall, between Third and Seventh streets, did not reach us.

Still, it was worth every minute of a very long day, from the wait at the BWI station for our delayed, fully-booked 9:30 a.m. Amtrak train, to the mob scene at Union Station and the 5:20 p.m. return trip. At the stations and the hours between was the real celebration – people of all sorts, race, gender, religion, national origin, calling for a little sanity in a world more often depicted as out-of-control crazy and scary.

They came from across the country. We met and chatted with folks who traveled from the states of Washington, Vermont, Connecticut and New Jersey, among others, to be part of the mob of reasonable people.

Not that all of them looked that reasonable, of course. There was a gorilla in a dark business suit, carrying a briefcase; there was a young woman costumed as a multi-fear combination vampire, witch and overzealous Christian; folks with painted bodies; a guy in a Captain Crunch outfit worthy of his own cereal box; a couple of red-and-white-dressed Waldos; an Army paratrooper (with a cleverly modified umbrella) accompanied by a curvaciously dressed red hotline phone; and witches galore spoofing Delaware’s Tea Party-Republican Senate candidate.

The signs many carried were a tribute to American creativity. Here’s a few:

We have nothing to fear but fear itself AND BEARS

Moderation in Defense of Liberty is No Vice

Trickledown Economics is a Golden Shower

Right-wing extremists should be killed … but in a nice way

All we are saying is give thought a chance. After 8 years, NOW you’re mad?

Go With Know/ Not No

On the train back to BWI, we met an elderly sex educator from New Jersey (Sex Educators for Sanity) who told of seeing this sign: Abstinence makes the church grow fondlers.

We arrived at the Mall about 10:30 a.m., and the rally viewing area was already jammed. So we kept walking, our backs to the Capitol and toward the Washington Monument. For more than an hour, people continued to stream into the Mall, from side streets and from the direction of the monument. By the thousands they came, a mist of sandy dust from unpaved paths rising from their marching feet. It was an unending parade of costumes, signs, and humanity.

Estimating crowd size is just that -- an estimate. My best guess is that it numbered in the hundreds of thousands, maybe approaching half a million. Call it the 400,000-Hippie March. Strangers talked to strangers. People made new friends. Lovers kissed. Two men walked hand-in-hand. A costumed couple carried their three-month-old twins… future social activists, one might guess, should they follow parental example. A woman in her 50s held up a sign for legalizing pot.

After we got home, we watched the rally on television – I had recorded the live Comedy Central production on our high-def DVR system.

Highlights? Who knew that Kid Rock could pen so moving a song, performing publicly for the first time, with Sheryl Crow, his lyrics about how we may not be able to solve the world’s pressing problems, but we can care.

And after much comedy, there was Jon Stewart’s closing speech -- which had its light moments, such as acknowledging some may have come to visit the nearby Smithsonian Air and Space Museum “and just got royally screwed.” But he had some serious points to make about the reasons underlying the event

"This was not a rally to ridicule people of faith, or people of activism, or to look down our noses at the heartland or passionate argument, or to suggest that times are not difficult and that we have nothing to fear. They are and we do. But we live now in hard times, not end times."

Where in most of his Comedy Central “Daily Show” episodes Stewart skewers the media with sarcasm and satire, he admonished it at the rally.

“The country's 24-hour political pundit, perpetual panic conflictinator did not cause our problems. But its existence makes solving them that much harder," he said. "If we amplify everything, we hear nothing."

Ordinary folks in America work every today to solve problems, he said, contrasting that with the failures to do likewise in the Capitol behind his stage and on cable television.

“Sanity will always be and has always been in the eye of the beholder,” he concluded, looking across the sea of people stretching far back along the Mall. “To see you here today and the kind of people that you are has restored mine.”

For our little part, two people invisible in the crowd, the pleasure was ours.

His entire speech is well worth reading – or hearing. Doubtless it will be posted soon on his Web site. It’s easy enough to find in a Google search for “Jon Stewart rally speech.”

For more rally photos, visit Bonnie’s Journeys blog. (The squirrel was really there.)