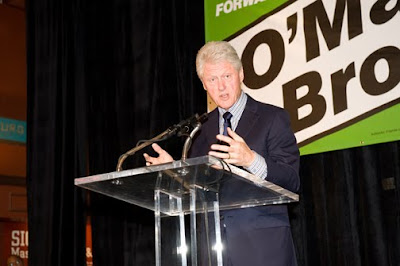 Bill Clinton, speaking Thursday evening at a big-donors affair in the Baltimore Museum of Industry. (photo by Bonnie J. Schupp)

In my four decades of daily journalism, I cannot recall a bigger turnout at a political rally – of politicians.

Four of Maryland’s eight members in the House of Representatives, both U.S. senators, Baltimore’s mayor, two suburban county executives (and a county councilman running for the top job), and the state’s comptroller, attorney general and governor.

Did I leave out anyone?

Oh, Bill Clinton. After these 13 folks had their turns, shortish and longish, at the microphone, the 42nd president of the United States was the keynote speaker.

Democrats all, they had assembled atop Baltimore’s historic Federal Hill park Thursday afternoon for a rally to turn out the vote on Nov. 2 – or sooner, since Maryland’s “early voting” opens today, Friday Oct. 22.

Most of the speakers are on the general election ballot, but they gathered under the banner slogan of “Move Maryland Forward” and the umbrella campaign of incumbent Gov. Martin O’Malley, who is facing a nasty challenge from the Republican he ousted from the job four years ago, Robert Ehrlich. (O’Malley and Ehrlich don’t like each other very much.)

About a thousand people, mostly supporters, turned out for the public rally – perhaps fewer than one might expect to see Clinton up close on a picture-perfect autumn afternoon, partly sunny, temperatures in the 60s, and a breeze strong enough to keep a giant Star-Spangled Banner (estimate, 16 by 24 feet) rippling and fully extended.

A few impressions from my notebook:

* Maryland Comptroller Peter Franchot declaring that Sen. Barbara A. Mikulski “will stand up against the forces that are running this country.” (Whoops! The Democrats are in power right now, Pete – and the popular Mikulski is among the most senior in the Upper Chamber. Must have been post-traumatric stress from when the Republicans, or at least King George the Younger, were running the ship of state over the edge.)

* State Attorney General Doug Gansler (unopposed for reelection), looking much like a clone of the slain Sen. Robert F. Kennedy -- onetime U.S. attorney general. (Maybe it was the hair.)

* The brief but strident remarks of freshman Rep. Donna Edwards, a community and peace activist who two years ago ousted a longtime Democratic incumbent to represent her suburban Washington district. Young, lean, pretty – and, largely unknown in Baltimore, wise enough to know there was a long line of speakers behind her. (My favorite line was her admonition, “You can’t vote often, but you can vote early!”)

* Rep. C.A. Dutch Ruppersberger, a former Baltimore County executive seeking his fifth term on Capitol Hill, who movingly recalled serving as a Democratic National Convention delegate with his now-late father. I like father-son stories. (Dutch looks a bit slimmer, but still has a huge neck – not much different than when he served as Sergeant-at-Arms for my 1963 high school graduating class at Baltimore City College. He’s a big guy.)

* Speaking of father-son stories, Rep. John Sarbanes looks a lot like his father, former Sen. Paul Sarbanes, but sounds more exciting as a speaker. (“We started a great journey two years ago with our new president,” the younger Sarbanes declared.)

I could go on, but better to cut to my favorite of the day -- Rep. Elijah Cummings, the latest to hold title to what has been a historically black district since the election of the late Parren J. Mitchell as Maryland’s first African-American congressman in 1970.

“Look around you,” Cummings told the crowd. “This is a diverse group of folks. Diversity is not our problem. Diversity is our promise!”

Cummings spoke of his roots, one of seven children born to a couple who moved to Baltimore from South Carolina and settled on nearby West Cross Street – which I note is within a mile of the speakers’ platform and the scenic backdrop of Baltimore’s Inner Harbor skyline.

They came here, Cummings said, to have good schools for their future children and for his father to get a “union job” – not “work in the fields of Manning, S.C., for 15 cents a day.”

“Think about what I said – Daddy got a job. If you don’t have a job, it’s hard to take care of your family.”

He digressed from the family tale, saying, “We need to understand where we have come from so we can understand what we have achieved.” And that the Bush administration had not only put the country into a ditch, but one lined with quicksand.

Then it was back to family.

So, Cummings said, his vote in Congress for healthcare was his most important. “I had one prayer, ‘Lord, don’t let me die before I vote for healthcare.”

Next up for Cummings, No. 3, was education, which he said, with growing evangelical fervor, “can transform a person, a family, a neighborhood – can transform generations.”

Cummings said he has concerns about the threat of Osama bin Laden and terrorism, but, “The greatest threat to our national security is the failure to educate every one of our children.”

Behind me, throughout, stood one of society’s failures – an African-American woman shouting out, louder than rally organizers felt comfortable with, a mantra of agreement with every declaration, but mostly fixated on numbers… whenever budget deficits, big banks, or Wall Street run amok were mentioned.

As the crowd waited nearly half an hour between the opening speeches and the arrival of the top entourage of Mikulski, O’Malley and Clinton, the woman sang out at the very top of her lungs with every rousing musical number piped over the sound system. Gospel, hip-hop, pop… she knew them all. And she was loud.

People were edging away from her, but I turned around trying to be friendly.

“I agree with a lot of what you were saying,” I told her, referring to her occasional shout-outs toward the speakers’ platform. “Do you vote?”

No. Not even registered. “They just put in whoever they want,” she said of the political system, adding that her son got “put away” for 27 years for drug dealing.

She just wanted to see Bill Clinton. She said she loved Clinton. He was the best. Then she gave me a big, smoky hug.

Somehow, it was just a big disconnect in her head between voting, participating, and adoring Clinton – who, along with Governor O’Malley and Senator Mikulski, seemed to notice with slight discomfort her intermittent shouts of “Oh yeah!” and “Trillions! Gazillions! Gazillions!”

Clinton spoke at length of Maryland being a leader in the national recovery from the recession, but mentions of numbers in any statistics he’d mention only seemed to incite another shout from the Gazillions Lady.

On safer ground, he offered parallels between television coverage of sports -- how the facts of what went on in baseball or football games are the basis of subsequent commentary by analysts, unlike commentary on matters of national importance.

“How much of this stuff you see on TV has anything to do with facts?” Clinton declared.

So one might presume he prefers Fox Sports over Fox News.

Clinton also spoke of the need for young people to be energized and participate in the election less than two weeks away.

“You are tomorrow’s America, and you need to show up on Nov. 2!”

Minutes later, Clinton, O’Malley & Co. were being whisked away in a motorcade to the Baltimore Museum of Industry for a big-donor affair – and where my wife, Bonnie Schupp, had been waiting for two hours as a volunteer to take photos for use by the museum.

I took a few pictures with my not-smart phone of Clinton speaking amid the crowd of office-holders on Federal Hill, but he’s just a tiny white hair-dot on the platform from my vantage point some 120 feet away.

Bonnie got a little closer at the museum with her Nikon D-700, and that’s one of her pictures up at the top. She even managed to get a glass of wine.