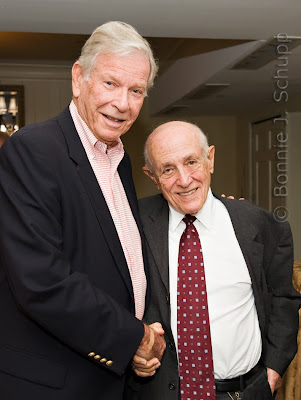 It was, many believed, an unlikely moment: The handshake, smiles, pleasantries.

Even the sight of these two men in the same small party room seemed unlikely – and some members of the old-timers’ press corps had expressed fears weeks ago that it would not go well.

The setting was the periodic gathering of the “Vintage Press Irregulars” – folks who had covered political news in Maryland’s capital city of Annapolis, some of them for decades. Many are retired now, as are some of the politicians and state officials joining in the low-key reunions.

Thursday afternoon, the mix included as guests two former governors who, since the 1970s, have been viewed as far less than friends: Marvin Mandel and Harry Hughes.

Hughes had been Secretary of Transportation under Mandel, and resigned in 1977 citing issues of integrity and alleging interference by a politically-connected contractor in the award of work on Baltimore’s subway project.

A few months later, Mandel was convicted on charges of mail fraud and racketeering centering on secret deals involving racetrack ownership and the award of racing dates. He served some 19 months in federal prison before President Ronald Reagan commuted his sentence, and in 1987 Mandel’s conviction was overturned by a federal judge on the basis of a Supreme Court decision in another case.

Were it not for Mandel’s legal controversies, Hughes might never have become governor. He faced off with three other major contenders in the 1978 Democratic primary, including the man who had served as acting governor during Mandel’s imprisonment. An influential state senator from Baltimore, the late Harry J. “Soft Shoes” McGuirk, famously described the Hughes candidacy as “a ball lost in tall grass.”

But in a strange twist, polling by the Baltimore Sun newspapers, which had endorsed Hughes, showed that people would vote for him if they thought he had a chance of winning -- and with that, his numbers rose rapidly and the polling pretty much became self-fulfilling prophecy on election day.

The Sun’s endorsement said the election would give voters a chance to break away from past political corruption that had included criminal convictions of the previous two elected governors – Democrat Mandel and Republican Spiro T. Agnew, whose 1969 departure to become vice president had paved the way for Mandel’s appointment and subsequent election to two full terms. (Agnew pleaded no contest to tax evasion in 1973, and resigned the vice-presidency.)

So that’s pretty much the background.

Mandel, the Baltimore native who rose to become speaker of the House of Delegates and by political happenstance and acumen, Maryland’s only Jewish governor. Hughes, a native of the state’s Eastern Shore and former legislator who upset what was portrayed as a rotten political applecart in succeeding him.

Thursday, when we arrived at the historic Maryland Inn meeting site within view of the State House dome, Hughes was sitting in the bar chatting with a few friends. Mandel arrived and sat in the party room across the hall, chatting with a couple of his friends. For about an hour, they were both in the party room, as close as 10 feet from each other and engaging in separate chats.

My wife, photographer Bonnie Schupp, was taking pictures of them and others, and wondering how and if the two governors might be brought together at least for a photo so she could pack away the Nikon D700 and flash weighing heavily on her sore wrist. I stood next to Hughes, looking for an opportunity, a break in his conversation… and there was a pause, just long enough, for me to ask: “Mr. Hughes, could you take just a minute for a picture of two governors together?”

He smiled, walked a few steps over to Mandel’s side and offered a hello. Then they shook hands, talked briefly, as Bonnie fired away. Click, flash, click, flash….

Joining the conversation, I learned about something else they had in common – besides politics and having been Maryland’s 56th and 57th governors, respectively. They had both played baseball as young men – Mandel in college, Hughes, as I had already known, in the Class D minor league. Both were pitchers. Both ended up going to law school. (According to the Web site baseball-reference.com, Hughes appeared in 16 games in 1949 with his local Federalsburg team, and had an 0-4 record and 5.54 earned run average; he hit .227 with 5 singles in 22 at-bats. Law school clearly was the right choice.)

And they’re both following the World Series when not working.

Mandel, 90, who won back his law license after the criminal case was overturned, remains engaged in his law practice.

Hughes, 84, chairs a state commission bringing together agricultural and environmental interests to improve the health of the Chesapeake Bay.

Last week, heading home from a weekend near Ocean City, we rode across a bridge named for him along Route 404 at the Choptank River, an important Bay tributary through farming country.

Did time melt away their differences?

Probably not. But at least they were polite.

Nice Bonnie Schupp photo.
The Vintage Press Irregulars is a disorganized group of reporters who covered the State House (or edited those who did) in the'50s, '60s and '70s. The Oct. 28 gathering at the Mayland Inn -- where many political stories came to light -- was the fourth such reunion. The two governor guests put up with us back thenm as did two other guests from those days: Speaker John Hanson Briscoe and former Sen. J. Frank Raley (D.St. Mary's). -- Val Hymes, coordinator. valhymes@aol.com

A really nice photo of two of Maryland's best. They have aged well and survived all the storms. Kudos to Bonnie Schupp on the photo and David Ettlin on the write-up.