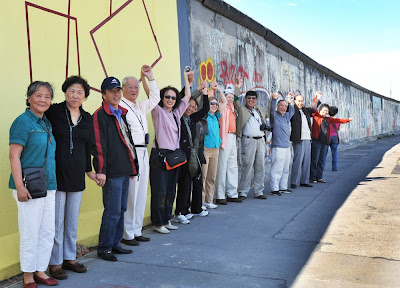 (Photo by a Chinese guy)
David and Bonnie join hands with tourists at East Side Gallery.

Backs against The Wall:
Close encounter of the
international kind

We visited Berlin's East Side Gallery Wednesday afternoon, and found first-hand just how topsy-turvy our world has turned in a mere 20 years.
The gallery consists of murals painted on a nearly mile-long surviving stretch of the Berlin Wall that cut through the heart of the city in a division of East and West -- nation and world -- from 1961 until its astonishing fall in November 1989 that led within months to Germany's reunification.
This section of the Wall blocked access to the eastern bank of the River Spree, a killing zone for anyone managing to cross the concrete barrier embodying the Cold War era's Iron Curtain.
Now there are gaps, one of which houses a souvenir house where tourists can pay to have an East Berlin stamp added to their passports. Another leads to a beach-style restaurant and beer garden.
We strolled slowly along the sidewalk on what once was deadly territory for those daring to attempt escape from East Berlin, and took in the more than 100 works of outdoor art. Then we stopped to watch a group of tourists posing for group pictures. They joined hands in a chain, with the wall art as a backdrop.
I offered to take the camera from one man so he could pose with the rest of his group, then Bonnie and I were invited to join in the human chain of hands, and our picture was taken in the group. We raised our linked hands together, strangers smiling together.
"Where are you all from?" I asked a seeming 40-something woman in the group, speaking slowly so she might understand my English.
"Welcome to China," she replied.
So there we were, global East meeting West at what once stood as the border of ideology -- communist and so-called free world.
You wonder how to say, in German or Chinese: "We´ve come a long way, baby!"