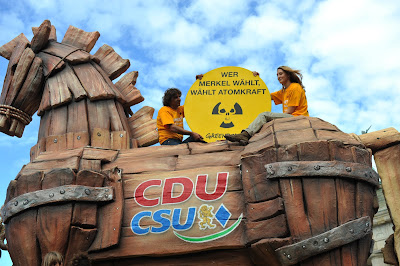 Germans young and old
take to the streets
in anti-nuclear protest
No matter where we go, Bonnie and I seem to find adventures purely by chance -- and that seems to be the case for our latest road trip, this time in Germany.
Barely recovered from jet lag after a Thursday/Friday overnight flight to Berlin, we've been to a massive anti-nuclear demonstration Saturday afternoon at the base of the Brandenburg Gate, followed by the final night of an international fireworks competition at the historic Olympic Stadium where the black American track star Jesse Owens won gold in the face of Hitler's growing Nazi might.
A crowd clearly numbering in the tens of thousands, including a parade of theme-decorated tractors and trucks, stretched as far as the eye could see westward from the old border crossing of the Cold War era's divided Berlin. Opponents of nuclear energy included young and old, in a turnout showing free expression is robust in the German capital.
The demonstration came three weeks before national elections, and though the Green party is very much a minority, the activists were voicing strong opposition to incumbent Chancellor Angela Merkel who is viewed as pro-nuclear and a threat to delay or block Germany's planned closure of atomic energy plants by 2020.
Many of the tractors and demonstrators came from the area of Gorleben in eastern Germany, the site of a nuclear waste dump. Among the many colorful posters and banners waved and displayed, my favorite was a simple yellow sign declaring: Gorleben ist überall.
The translation, provided by our German friends and hosts Beate and Ellen: "Gorleben is everywhere."
Nearby, two seeming teenagers stood and waved large signs atop a giant trojan horse clearly symbolic of the dangers foreseen from atomic plants and nuclear waste.
Our friends told us how once a year, a train hauling nuclear travels across Germany in a trip slowed by protesters who sit on the tracks until carried away by the police.
Peaceful protest, too, is alive and well here.
Media accounts put the number of protesters in the range of 50,000, and the tractors at about 400 -- enough to produce a bit of traffic chaos. But we got there by the Underground subway -- our first journey using the local mass transit.
I stopped at a tourist information shop near the Brandenburg gate and asked if there was a map of the transit system in English.
"Why would you want one?" asked a young man working at the counter. "All the stops and signs are in German."
Duh!
But he offered a subway map with larger letters, making the German easier to read for my 2.5-magnification-assisted eyes.
After returning to our friends' apartment for dinner, we ventured out to Olympic Stadium about a mile away and stood in the occasional light drizzle and breezy chill to watch the aerial part of the fireworks show (and the glow and flashes from ground displays inside).
Some of the bursts were unlike any we've seen in Baltimore. It would have been nice if international fireworks competitions had scouts from the States to check out the latest in big bang shows.
Check back later for more of Bonnie's photos, and our continuing venture into another country where, frankly, my lack of foreign language skills makes every day a little unpredictable.

Hi Bonnie and David,
Glad you arrived safely in Berin, and not surprised you were immediately immersed in protest and fireworks. Will look for more posts. I spent Saturday at Mount Vernon - first visit in years. No protests, but free Dove bar with purchase in gift shop. I bought a 35 cent post card of George Washington's dentures to send to my dentist. Kept the candy bar! Have Fun!! Shirleyxo