after half a century

It was 8:30 on a Saturday night when the story began -- a middle-aged man knocking on the door of a Catholic church rectory on Baltimore's Old York Road seeking help, telling a priest  he was being "terrorized by a group of teen-agers."

Another priest called the city police emergency number. And then they waited. And waited. In the ensuing hours, Father Richard T. Lawrence tried to navigate by phone through the chain of command, but was unable to get beyond the patrolman manning the office of the night commander, Maj. George C. Schnabel. When he called again, the same patrol officer informed the priest that the major had flatly refused to send a patrol car to the area.

Two days later, Father Lawrence reached out elsewhere -- calling the Baltimore Sun, where this young reporter arriving for work on a noon general assignment shift was handed the story to check out. It was a Monday, and bigger news was breaking elsewhere in America and Maryland, but the priest's complaint became the lead story of the next day's front page. 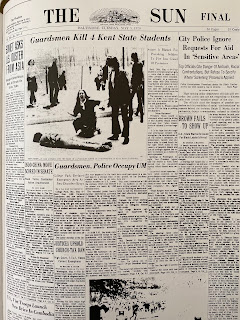 Turned out, the police department had stopped responding to calls from areas near the home bases of half a dozen organizations deemed to be black militants. "We're not responding to certain areas on a selective basis," Col. Frank J. Battaglia, the chief of patrol, told me, "in areas where we may have a confrontation."

The church rectory was more than a city block from the home of a group called Making a Nation, on Cator Avenue. The space between was informally referred to as "a gray area" -- and the police were not responding there.

The story won my first front-page byline, and showed a measure of importance for issues of race relations in Baltimore -- which has not really changed much since.

That story appeared exactly 50 years ago today, and can be readily found in a coffee table-size book published by the newspaper in 1999 titled "A Century in The Sun: Front Pages of the 20th Century."
In the context of history, my story was vastly overplayed on what was then an eight-column page.

Next to it, across five columns, was an eventual Pulitzer Prize-winning photo by photojournalism student John Filo of a teenager, her arms spread in anguish as she knelt over the body of a student killed by Ohio National Guard gunfire during an antiwar demonstration at Kent State University.

In all, four students were killed and nine injured as the guardsmen tried to disperse hundreds of demonstrators on campus. And a story under the photo reported that police and Guard troops had been ordered to occupy the University of Maryland's College Park campus. "College Park Declared Emergency Area As New Disorders Erupt," the headline read. A bottom-page photo showed state police using tear gas to disperse a crowd of demonstrators there.

Kent State and its reaction across America marked a homefront turning point in the antiwar movement, but the Vietnam combat grinded on another five years -- and not the last of ultimately useless wars for this nation, as witness Iraq and Afghanistan.

Likewise for race relations in Baltimore.

My slightly overplayed story on "gray areas" was flanked by an article on state and federal arrest warrants being issued for black militant H. Rap Brown after he failed to appear for trial on riot and arson charges,   and there was a "reefer" under my headline to a back page story on Baltimore's police commissioner denying that arrests a week earlier of Black Panther members caused a rise in tensions.

Gov. Marvin Mandel, who in those days had oversight on the city police chief, ordered an investigation of the "gray areas" incident, which quickly determined that the commissioner had ordered no response to calls from the half-dozen addresses of militant groups without the presence of a ranking officer. The order was misinterpreted, however, as subordinates simply avoided response even to areas nearby.

I was sent to police headquarters to interview the commissioner, Donald D. Pomerleau, but he was having none of it. His secretary said he was too busy to see me, so I told her I'd wait. I sat there for five hours. Came 5 o'clock, and the secretary turned off the lights and told me he was gone.

What has not gone in the 50 years since is the issue of race in Baltimore, as witness the "uprising" of five years ago, after the fatal injury of the arrested Freddie Gray in a police van that still divides the city. And race continues to be a component of nearly every aspect of life in the city -- education, health, housing, economics, politics. The current mayoral election features a handful of credible black candidates, and one white female candidate. A recent political ad for a black candidate purported to show the geographic pattern of her campaign donations as a swath of the city through its predominately white population centers.

And there is the issue of race in public safety, and distrust of police by much of the black community not just because of the Freddie Gray death. It has been exacerbated by the scandal of the police department's rogue Gun Trace Task Force, many of whose members (not all of them white) falsified evidence, stole money and drugs in raids and arrests, and ended up in prison themselves.

Fifty years and running, and what has changed in our society?