On The Road Again, Chapter 8

Quirky kicks along the path of Route 66

The winds picked up gradually on a long day’s drive southeasterly from Petaluma, crossing vast stretches of sparsely populated land – and was at times howling by the time we stopped for the night in Barstow, Calif. And it damn near crippled me.

Getting ready to unload the car near the entrance of the local Holiday Inn Express & Suites, I turned, car key in right hand, to walk into the lobby when what felt like a curb tripped me. Gravity happens fast, and I landed on both knees, my right elbow and the left palm that kept my head from meeting concrete. The wind had blown a large rubber mat behind my right foot.

Nothing broken, just pain in four places… and hope that the IHG folks thank me for being so nice and not calling a lawyer. (Like refunding the 20,000 reward points I surrendered for a free night, hint hint….) In the windy conditions so prevalent on the high desert, the mat should not have been left outside. The hotel staff was very apologetic, and the mat was removed… hopefully to stay inside the entrance doors in the future.

That said, the motel was excellent. 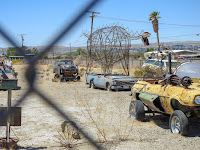 In the morning, we took a little detour in search of a final dose of California amusement in Barstow (Mad Max-style “vehicles from hell” created from wreck parts by a now-dead body shop owner), and then north of the city off Interstate 15, an abandoned water park on a parched back road near the Mohave Desert community of Newberry Springs.


The strange assortment of horror vehicles remain behind a locked fence on private property adjacent to an RV park, so Bonnie was limited to photographing them by shooting through and above the metal enclosure.
We fared much better at the abandoned Lake Dolores Rock-a-Hoola Water Park, which had opened and closed a couple of times since the 1960s, and went out of business in 2004. Since then, the billboards and structures that housed rides and concessions have decayed and given way to trespassing graffiti artists.

The water slide has been adorned with a slope of rocks, and pools are as dry as the climate. It’s eerie, and fascinating – and pretty much open to trespassers, several of whom were shooting photos when we arrived. Bonnie took pictures for more than an hour.

Even the dusty two-mile stretch of road off the interstate had its own ghost, of sorts – a burned-out A-frame building with a large red-painted cross above what used to be the front door. Perhaps it was a church. Inside, there was evidence of its later use, bedsprings and a circle of stones around the remains of a campfire. The ample graffiti includes a large message: Gotta be a Sinner to be a Saint.

One thing the area needed, though, was better highway signs. We drove back to I-15 and headed some 20 miles south back to Barstow in order to reach Interstate 40 – only to find as we then headed east an exit for Newberry Springs that could have saved us at least 50 miles of driving. But at least we were headed in the right direction, and after about 130 miles of mostly desert scenery later crossed the state line.

We called it a day at a Days Inn, in Kingman, Arizona., about $70 cheaper than the Holiday Inn Express.  There was no AAA discount – its contract had been discontinued, the owner said, but then offered an even better AARP discount even though we aren’t members. It was clean, relatively comfortable, and included a modest continental breakfast. Some nights, luxury be damned.

When you’re a fan of the bizarre, it’s impossible to drive quickly across Arizona – particularly on I-40, which runs parallel to and sometimes overtakes the quirky old U.S. Route 66. The interstate took away much of the business from the motels, restaurants, gas stations and trading posts that lined the old highway, and are now largely abandoned. In many spots, the oddball remains are luring people back, if only long enough to walk around and take pictures.

Our first stop, though, after a bigger breakfast in the town of Williams, was Walnut Canyon National Monument. It seemed a chance to make use of our lifetime seniors national park pass, but the usual admission price of about $10 had been waived because of extreme fire danger closing a major walking trail. We took a three-quarter-mile stroll along the open rim trail, where ample signs identified trees and plants, explaining how they were used by the Native Americans who had inhabited the area centuries ago. And visible, distantly, from the canyon rim were cliff dwelling remains on the other side.

We had another alternative, of course – taking one of the roads leading to the Grand Canyon. But on the Friday of Memorial Day weekend, that huge attraction would obviously have been crowded, and we’d been there before. Instead we got a little canyon, nicely managed by national park rangers, and were back on the road an hour later.

The quirky fun included stops at ghostly remains of the Route 66 heydays at Twin Arrows and Two Guns, which are about five miles apart and just off Interstate 40.

Twin Arrows was a fuel stop and trading post back in the day, but the gas station and café are abandoned, decaying and, of course, decorated with graffiti. And there are two giant wooden arrows, their tips seemingly stuck in the ground. Nice picture, but whoa! – we watched a pretty young woman stretch out on the ground as if the arrow had taken her life, while her boyfriend took pictures of the scene.

So I couldn’t resist my own version, lying down with my legs spread and the huge arrow seeming to have hit an unspeakable target. It was one awful splinter!  Oh, not that! Trying to get up after Bonnie took a few shots, I tried holding onto the sides of the arrow to pull myself up and got a splinter in my finger. Call it suffering for art!

Two Guns was more elaborate. It once had a campground, pool, restaurant, gas station, and even a display of live mountain lions. Bumpy dirt, gravel and asphalt lanes make it possible to drive around the complex, park and get out to appreciate the remains of it all, including an archway bearing the words Mountain Lions. And down the steps behind the arch are two cages where the lions were kept.

Driving along the highway, there are so many sights that you just can’t stop for all of them, so we passed up Meteor Crater. But we did stop in Winslow, a town we had passed through many years ago. I just wanted to stand on a corner and take it easy for a few minutes.

Lots of other people had the same idea, so I tried to assemble a crowd of standees for a group photo. But the angle of the bright sun did not help, so I walked across the street and found Karen and Dave (Santa Swanny) Swanson of Chula Vista, Calif. (he works for the San Diego Maritime Museum to support his Santa Claus habit, and, like Bonnie, she's a retired middle school teacher).

They were  doing what you do on a corner in Winslow, Arizona. So we took pictures of each other and all of us together, had some laughs and then headed our separate ways. But we exchanged cards first. I suspect we’ll be in touch again! 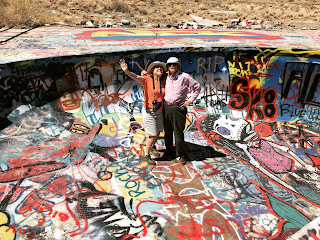 There was yet one more stop, in the community of Houck, as we neared the Arizona-New Mexico border. It was a dirt road lined with weathered billboards, mostly for a now-closed trading post on the other side of the interstate. They were, in a sense, American and Native American art objects in their ruined state, and spoke of bygone days. One even pitched taking  pictures – with Kodak film.
Bonnie shot it with, of course, her digital camera. 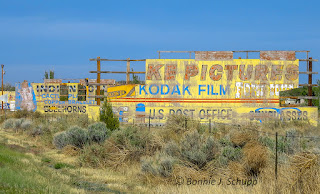 About 40 minutes later, we checked in at what might be the most luxurious Holiday Inn Express & Suites in America, in Gallup, New Mexico. We had made the reservation by phone from the car, burning up 20,000 more reward points. As a “platinum member” I asked if an upgrade were available, and we ended up with a king executive suite so spacious it had a long, curving work desk. And the just-baked chocolate chip cookies in the lobby were scrumptious!

Next chapter: Our Santa Fe trail