Turmoil then and now 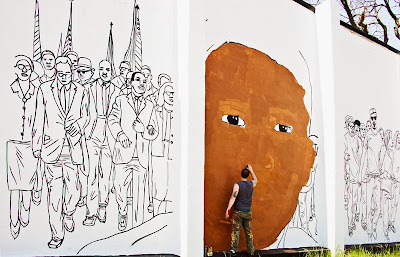 
across chasm of 45 years

Today marks the 45th anniversary of Ohio National Guard soldiers fatally shooting four students during a protest of the Vietnam War at Kent State University. The eventual Pulitzer Prize-winning photo of a young girl kneeling in anguish over the body of one of the slain students ran atop the front page of newspapers across the world. 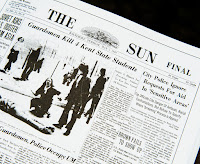 In the next morning's edition of The Baltimore Sun, the Kent State story ran under the picture. But the lede story -- at the top right of the page -- carried my first front-page byline, and had nothing to do with the shootings or the increasingly unpopular war that was raging in Southeast Asia.

My story was about policing and racial tension in the City of Baltimore.

You don't see much these days about war protests, even though America has been at war for close to 14 years in Afghanistan and Iraq.

But racial tension is back in the news in Charm City, in the wake of the arrest by city police officers, and subsequent death, of 25-year-old Freddie Gray in a westside neighborhood little changed economically or demographically since the rioting here and elsewhere that followed the 1968 murder of the Rev. Martin Luther King Jr.

My story began with a call to the city desk by a priest at a Catholic church along Old York Road, about two miles north of the central downtown area. A man who had been robbed had come knocking at rectory door in the wee hours, seeking help. To the priest's astonishment when he called the police, he was told that officers could not respond there because it was a "gray area."

It turned out there were half a dozen so-called "gray areas" around the city, each of them near the location of headquarters of what were perceived as black militant groups. In this case, it was a group called Making a Nation, located more than a block away on Cator Avenue.  The fact that the city police were refusing response to portions of Baltimore out of fear of provoking racial unrest was stunning enough to make it the top front-page story in Baltimore the next morning.

Not many people remember my story. Kent State, however, was and remains a watershed moment in American history.

The "gray areas" fiasco proved to be misinterpretation of a directive issued by then-police commissioner Donald D. Pomerleau for officers not to respond to any of the addresses occupied by black  militant groups without the presence of supervisory personnel.

You don't hear the term "black militant groups" in Baltimore these days. More often, you hear about street violence and gang disputes over drug territory. The 2015 gang roll call: Crips, Bloods, Black Guerrilla Family. They were more about turf control for drug dealing and crime than addressing racial inequities in Baltimore -- until last week, when gang leaders came together seeking to discourage the rioting and disorder that brought a surge of thousands of police officers and National Guard soldiers into  town.

In 1970, Baltimore was a powder keg of racial tension. It was just two years after the King riots, whites were fleeing to the suburbs in ever-increasing numbers, the downtown shopping district was in its  death throes, and police were trying to avoid confrontations that might make matters worse.

Forty-five years later, the city population has shrunk to about 630,000. Parts of Baltimore look like ghost towns for all the vacant buildings. Poverty is endemic, opportunity elusive. The American Dream -- well, what is it? Does it even exist in cities like Baltimore? Or is it just an American Nightmare now.

Today, driving through town, we were passing through a section where a week ago young people had been throwing rocks and bottles at riot-equipped cops in skirmishes broadcast live on television, globally. It was an explosion of the racial powder keg, again.

At the intersection of Mount and Presbury streets, an outdoor mural artist who uses the name Nether was rolling brown paint to create a giant image of Freddie Gray's face, flanked by a scene of marchers for social justice.

There was not a police officer or soldier in sight.