Milestones: 40 years down the road 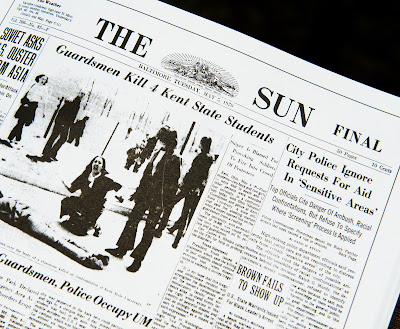 Kent State anniversary
brings back memories
of other front-page news

The anniversary had skipped my mind, but an NPR interview reminded me: Forty years ago this week, my first front-page byline appeared in The Baltimore Sun.

The NPR story had nothing to do with mine, except that its subject – the Kent State University massacre – made the front pages of Tuesday May 5, 1970, historic. Newspapers ran the photo of runaway 14-year-old Mary Ann Vecchio crying out in anguish over the body of Jeffrey Miller, one of 13 students shot by National Guard soldiers during an anti-war demonstration. Miller was one of the four who died.

Disturbances in the college town of Kent, Ohio, had prompted its mayor to declare a state of emergency and ask the governor to send in the Guard troops to restore order. The campus demonstration was one of many across the nation – including the University of Maryland – in response to an invasion of Cambodia ordered by the Nixon administration in what was perceived as an escalation of the Vietnam war.

My story was the result of a similar mindset in Baltimore, except that the issue was policing and race relations.

About the time of the noon-hour gunfire in Ohio, I was arriving at the city desk as a young reporter and being handed an assignment: A priest’s complaint about the refusal of the city police to respond to a call for help from his rectory a few nights earlier. A man had knocked on the door that Saturday night, seeking help because he was being “terrorized” by a band of teenagers.

The priest called the police, but after more than an hour no officer had arrived. He asked a fellow priest, the Rev. Richard Lawrence, who had experience in police-community relations, to check on the situation, and the latter priest told me how he called the Chief of Patrol’s office and was informed the department would not respond to the rectory because it was in “a gray area” with a “racial problem” and police were “afraid that the car would be hit with rocks or bottles or overturned.”

The church on Old York Road was around the corner from a house on Cator Avenue that was reportedly the headquarters of a group called Making a Nation – and one of half a dozen addresses that police had linked to black militant organizations. Police Commissioner Donald D. Pomerleau had issued an order that no patrol officer respond to those addresses without the presence of a supervisor, but the directive was misinterpreted to mean no response to the wider “sensitive” or “gray” areas around them.

Just a week earlier, city police had arrested a dozen members of the militant Black Panthers in connection with a killing, and the day I was working on the “gray areas” story, Commissioner Pomerleau was testifying at a court hearing in opposition to a civil libertarian motion seeking to dissolve a judge’s order that had banned the distribution of infammatory Panther literature.

Baltimore was just two years beyond the rioting that followed the assassination of the Rev. Martin Luther King Jr., and Pomerleau, asked in court whether the arrests had the potential to spark comparable civil disorder, replied, “I say no,” according to a story by a Sun colleague appearing elsewhere in the same edition as my front-pager.

My story was the front-page lead, with a two-column headline at the top right. It was adjacent to the image of Mary Ann Vecchio that won then-student photographer John Filo a Pulitzer Prize and added fuel to the growing antiwar movement.
The Kent State account topped the middle of the front page, and under it was the story on the emergency declaration by Maryland Gov. Marvin Mandel that sent Guardsmen to the College Park campus. A downpage photo showed state troopers using tear gas to disperse demonstrators there.
Hardly anyone remembers my slightly overplayed story, which was clearly less important than the Kent State tragedy or troopers firing tear gas at Maryland student protesters who had blocked U.S. 1 in College Park for much of the day. (The war and race relations came together nine days later at Mississippi’s Jackson State, where city and state police gunfire on student protesters left two dead and 12 wounded.)
Forty years ago, Baltimore was a tense city just beginning to find its way in race relations and America was caught up in dissention over the Vietnam war. Much of the response on both fronts, as reflected in the front-page stories of May 5, 1970, seem in hindsight to have stemmed from fear.

Today, strangely, race still colors all too many aspects of life in Baltimore – including education, housing, health care, justice, politics.

And America is mired in yet another increasingly unpopular war.
There was a demonstration, of sorts, at College Park this year that brought a police response -- to quell the boistrous celebration after Maryland beat Duke University in a basketball game.
Prince George's County police were accused of brutality in the beatings of two students that night.
In retrospect, isn't that strange?

I find it strange that 40 years later we are still in times of wars [just or unjust],the average act of armed youth has increased while the age grouping has lowered.
40 years ago although I did not have complete understanding of "the whys" of "kent state",I did understand the "what". the laws our forefathers believed in and were willing to stand up for that we might have personal freedoms were being challenged, trampled , and truely shot out from under us.
something snapped in me that day,that summer,and for several years afterword...it is better i do not discuss politics these days and I rarely do..I believe 40 years ago changed many,many,people:however we are neither silent nor the minority.
r bauk:love ,honor ,respect ,peace