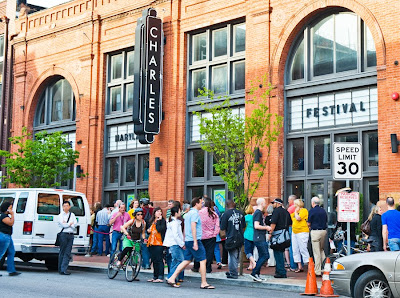 Indie film 'Night Catches Us'
examines 1970s racial divide
from an urban Ground Zero
'Wire' stars cast in familiar roles
Maryland Film Festival director Jed Dietz introduced it as a story no one else was telling, but he might just as well have called “Night Catches Us” the essence of what his annual celebration of filmmaking is all about.

The story by writer-director Tanya Hamilton examines a tense period in urban race relations from the perspective of an extended African-American household caught in the epicenter of violence in the aftermath of the Black Panthers movement in urban America – with killings of Panther members by police, and vice-versa.

It was not an easy project to bring to the screen, having taken a decade from the time Hamilton began writing it. Likely taking the least time was the actual shooting last year. “We had 18 days and a very tiny budget,” she told the audience after a screening at this weekend’s 2010 festival.

And it may prove difficult to reach the big biracial audience that “Night Catches Us” deserves when the film has its national release – which could come this fall. Hamilton announced to applause that her film has been purchased by Magnolia Pictures and could be in theaters by November.

A generation younger than the characters and situations she depicts, Hamilton nonetheless captured the tearing social fabric of a time just past the Black Power movement’s heyday and before black voices began having a major impact on political power. Interestingly, the vocal backdrop for the opening scene is Jimmy Carter in a 1976 presidential campaign speech, about returning power to the people.

The setting is Philadelphia, but could just as well have been Baltimore, Detroit or any number of cities with large but marginalized black populations.

A police raid crashing into the home of the central characters after the killing of a white officer had the feel of the real-life raids in Baltimore in the 1964 manhunt for the black Veney brothers for the killing of a policeman after a liquor store robbery, and the suspicion and hatreds between black and white fit the backdrop of the 1970 tensions here when police and politicians worried about an incident – any incident – sparking a rerun of the 1968 King assassination rioting.

Fear is never a good basis for communication.

The Maryland Film Festival gave a helping hand to director Hamilton, with early financial support through a 2006 Maryland Filmmakers Fellowship grant. Her movie also was shown to an audience of festival members as a work in progress, for feedback before final editing.

Hamilton relied on friends and favors in assembling a top-notch cast, which includes Anthony Mackie (seen most recently in “The Hurt Locker” and “Notorious”), Kerry Washington (who portrayed the wives of Ray Charles and Idi Amin in “Ray” and “The Last King of Scotland,” respectively); and two stars from the Baltimore-filmed HBO series “The Wire” – Wendell Pierce and Jamie Hector.

Hector, who gave menace to the character of ruthless drug kingpin Marlo Stanfield in “The Wire,” is cast as a young black gangster. Here’s hoping he doesn’t get typecast – I’d love to see him in other kinds of roles.

Pierce… well, as in “The Wire,” he’s a police detective. But at least we’re seeing him now in his native New Orleans as a struggling, and hustling, musician in David Simon’s new HBO series, "Treme."

He also attended and fielded questions from the crowd at the weekend screenings of “Night Catches Us,” and was effusive in his praise for Hamilton – noting the shooting of many of the scenes in just one or two takes, without a videographer’s assistance. “She had a vision of what she wanted,” Pierce said.

Hamilton said she drew in part on the 1969 Chicago police killing of Black Panther leader Fred Hampton in molding her story, and the film includes – seamlessly – related historical footage.

She said the tight shooting schedule frayed some nerves, as the light of day would give way to evening fireflies. Asked if that concern about losing the light was an underlying factor in naming the film, Hamilton said the title really was derived from a saying in her native Jamaica that she often heard from her grandmother: “Don’t let the night catch you.”

Darkness is a powerful metaphor for this very powerful film. And its depiction of a stark racial division in America is a reminder in a time of other, equally difficult divides in society today.

Other films we caught

Lacking the stamina to handle three intensive days of films from 11 in the morning to late at night, we opted this year to resist the temptation of all-access passes and instead took advantage of the festival membership first-day, 11-to-6, all-you-can-watch open house at the multi-screen Charles Theatre north of Baltimore's rail station.

We started with a packaged group of seven dramatic shorts, some of which we won’t regret never seeing again. But an Israeli tale, “On the Road to Tel Aviv,” was totally compelling. Its conflict, in the wake of a bus bombing, is born of fear as passengers balk at staying aboard a mini-bus out of suspicion that a woman in Arab garb is a terrorist.

The program included a guest appearance by young Australian filmmaker Patrick Maxwell, who fielded questions about his short, “Mrs. Wright,” a mid-life married woman who encounters, longs for, and ultimately backs away from having a relationship with a younger grocery store clerk. (Aha! A cougar in Sydney!)

After a quick lunch in the festival’s Tent Village across the street from the Charles, we caught two feature-length films, the comic road trip “Bass Ackwards” and the bizarre and unsettling, darkly comic subtitled, Greek-made “Dogtooth.”

The former was directed by and stars young filmmaker Linas Phillips, who also co-wrote the script, and he chatted with his festival audience about the year of work involved – first from shooting much of the cross-country journey, then three days based in a city of convenience, Minneapolis, when actor-friend Jim Fletcher had the time for some quickly-produced scenes that became key to the story.

Another star is the vehicle itself – a VW microbus that, at some time in its past, had its middle removed and the two ends welded together. Phillips said it was found and purchased through eBay, and is now sitting on his parents’ driveway in Massachusetts if anyone wants to make an offer for the tiny four-seater.

“Dogtooth” is the tale of a family of five, in which the wife, man-boy son and two naïve daughters grow up sheltered from the world on a private, fenced estate, their lives directed by a sometimes-dictatorial businessman father. He brings in a woman security guard from his industrial plant to provide sex for the son, but she also brings on calamity in exchanging gifts – including some video movies – for sex in seducing one of the daughters. The result is, in a word, disturbing.

(For another view from the festival, check out the Journeys blog by my wife Bonnie Schupp.)

I could not let the passing last week of longtime Detroit Tigers baseball broadcaster Ernie Harwell slip by without a mention.

I met the man once, briefly, nearly a decade ago at a patio lunch outside the Tigers’ spring training stadium in Lakeland, Fla. Harwell was kind enough to let me join him, giving me an opportunity to explain how his was the first baseball voice I could remember – from his 1954 broadcast work in Baltimore in the debut season of the modern-era Orioles.

Harwell was genuinely appreciative that close to half a century later, I could still remember and thank him for his Oriole radio broadcasts from a time when I was all of eight years old.

“We didn’t win a lot of games,” he recalled in that famous voice, smiling and pausing for a micro-second. “But we sure had a lot of fun.”

Just in time for the occasion, I found the perfect Mother's Day gift for wife Bonnie: A dead man’s nutcracker.

I was driving home from the supermarket Saturday afternoon when I noticed a small sign at an intersection near our home: “Estate Sale.”

I drove down the long road toward some of the area’s finer waterfront homes, and it took about 15 minutes to track down the right driveway – almost at 3 p.m., as the sale was ending.

It was the home of a local business leader and electrical engineer who had died a month and a half ago from Lou Gehrig’s Disease. He was 64 – just a few months older than me – and judging from some of the oddities left after the picking-over by an earlier throng of buyers, had the kind of sense of humor I appreciate.

So I bought a couple of crazy gizmos, like a battery-powered device that scrambles an egg inside its shell, and a Rube Goldbergish egg cracker. His niece told me he had ordered them from a catalog shortly before his death, and never had a chance to see them in action.

Then there was the nutcracker: A long, hand-carved wooden figure of a nude woman, with a small depression high between the thighs where the nut is placed between the spreading legs. Then you squeeze them together and – crack!

But the real gift is laughter.