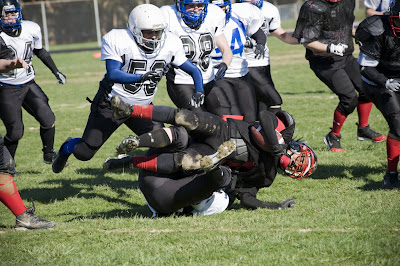 Burn ball-carrier (in black) heads turfward in the grasp of a Comets tackler at Saturday's exhibition game. (Photo by Bonnie Schupp)

Baseball season may be upon us, but even with an Oriole victory over the hated New York Yankees on Opening Day, my heart right now goes out to the Baltimore Burn women's football team.

With the season opener two weeks away, the Burn took on – and took a few licks from – the Columbus Comets Saturday in an exhibition game at Baltimore’s Northwestern High School.

In case you missed the link two weeks ago to my featured story and Bonnie’s photos at the growing news blog BaltimoreBrew.com, the Burn play in the 38-team Women’s Football Alliance. Tackle football. Helmet-crunching football. Colliding-bodies football. Lying-limp-on-the-ground-for-two-minutes-after-colliding football.

Scary-stuff football, particularly when you’ve got a vantage point standing at the sideline and can hear the crunch of the offense and defensive lines, the grunts and oomphs of collisions and tackles, and… yup… occasional unladylike expletives.

Ranging in age from 18 to almost 50, these hons have the hearts of lions… and not the Detroit kind, although I’m sure those lions are also fierce. This is Baltimore!

About 100 spectators attended the game, and watched the Burn fall a couple of touchdowns behind in the first half – then rally with a pair of TD’s and two-point conversions, but not quite enough as the visitors from Ohio took the game by a score of 21-16.

A few problems for the Burn: The lack of a kicker Saturday, which meant turning over the ball deep in their own territory several times; and a novice quarterback whose initial passing attempts were far off the mark or fell into opponents’ hands.

The Comets seemed better organized on the field in the first half, but the Burn defense grew considerably stronger in the second half while the home team rallied for its touchdowns – one on a long run by Stephanie Walker, the other on a pass from quarterback Tracy Deuber to receiver Robyn Munford.

Lacking a place-kicker, the Burn ran successfully for the two-point conversion after each touchdown.

Among the players seeing action on defense was Burn co-owner Deb Miller, a 49-year-old middle school gym teacher and six-time grandmother who is the oldest on the roster.

Keeping stats on the sideline was another 49-year-old on the roster, psychiatrist Betty Jo Salmeron, who was dealing all week with problems on the home front – talk about irony for a player on the Burn, her house in suburban Towson was heavily damaged by a fire. No one was in the house at the time, and a neighbor alerted the fire department, she said.

Dr. Salmeron, who played last year as a rookie kicker and defensive cornerback, was joined on the sidelines Saturday by the youngest of her three daughters – the only one not “mortified” that mom plays football.

For locals interested in checking out the team, the next practice takes place Saturday morning, beginning about 8 a.m., at Southside Academy in Baltimore’s Cherry Hill neighborhood.

The Burn’s eight-game season begins on the road April 18 against the Connecticut Cyclones.

Tickets are $10, and there’s a discount for military and police, and seniors 60 and older. Season tickets are available at $30 by emailing a request to burnmob@yahoo.com. The Burn Web site is http://www.baltimoreburnfootball.com/.

Check it out. Buy a hotdog. Applaud the cheerleading-and-drum troupe, and root for the home team. They’re not making a million bucks. They’re out there for the love of it, and in sports these days, that alone is something to cheer for. Let the Baltimore Burn light your fire for a couple of hours!
(If you missed the earlier story, here's the link: http://baltimorebrew.com/blog/?p=1414#more-1414)

I might have posted the football report in a more timely fashion, but the weekend calendar was overloaded as Bonnie’s two-year photographic project, “Defining Ourselves,” had its gallery debut Sunday at the Unitarian Universalist Church of Annapolis.

In case you hadn’t read or heard about or participated in the project, Bonnie asked a diverse range of people to answer this question: “How do you define yourself?” The reply had to be in a single sentence, of any length, beginning with the words “I am….” Answers were not shared with participants until they, themselves, had submitted a response.

Bonnie worked with most participants on a collaborative portrait illustrating their answers, which was a huge challenge given the geographic spread across the planet… some as far away as Australia, New Zealand and Japan. In one case, we drove about 650 miles out of our way on a road trip for Bonnie to take the picture of art professor Petronio Bendito, a Brazilian on the faculty at Purdue University in Lafayette, Indiana.

We had to get his picture. His answer was one of the shortest, yet one of our favorites:

We drove to upstate New York to get Texas-based singer-songwriter Dirk Hamilton, while he was attending a folk music convention. His answer was subtly deep, and even shorter:

Some of the photos taken that rainy weekend ended up as the front and back cover illustrations for Dirk’s new, just-issued CD, “More Songs From My Cool Life.” (http://www.dirkhamilton.com/)

We hung the 13-by-19-inch portraits Thursday and Saturday, taking up every available space in the church gallery with 52 of them – people ages 4 to 102. Others that didn’t fit were hung in smaller images on a tabletop “tree.” There’s also a bulletin board for visitors to post their own self-definitions.

Bonnie’s exhibition will remain on display at the church until April 29, and she’s hoping to find other venues for it in the future.

It’s not your average art show. It’s unlikely that visitors would be purchasing the photo portraits of strangers. Like those football women who play for the love of the game, Bonnie’s project came straight from her heart. And touched the hearts of others -- participants, and the dozens of folks who attended the opening reception on Sunday.
And by the way, if you haven’t thought about it before, how do you define yourself?

Remember, just one sentence beginning “I am….”

Thanks for your recent comment on my blog. Wasn’t sure how best to message back, but since you indicated you’re going to keep visiting – thanks for taking the time here. I think I’m averaging 35 visitors a day, and that makes you one of my favorite people!

You always bring others happiness.