to unveil highway marker for

Mountain Lake Park, Md. -- Time is unrelenting. The past fades from memory. But not this week, in the remote and mountainous western corner of Maryland, where a crowd of more than 100 gathered by a rural roadside to commemorate the longest strike by public employees in United States history.

Culminating a years-long effort spearheaded by retired steelworker and union activist Len Shindel, the ceremony featured brief remarks by labor leaders and even a couple of local politicians before the unveiling of a highway sign along Route 135 remembering the seven-month strike by the Garrett County highway workers who repaired the roads, built the bridges and, perhaps most important, plowed the snow in the long, cold winters. 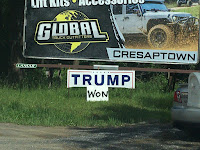 Unions don't come naturally to conservative and largely Republican Garrett County, where you don't have drive far to see the signs, flags and banners of allegiance to the failed Trump reelection campaign. Along Route 39 just west of Oakland, the county seat, a Trump/Pence sign had been altered -- the name of the former vice president/running mate removed and replaced with a three-letter word to read Trump Won.

Another property along the highway sports a sign declaring, "Fuck Biden and Fuck You For Voting Him." 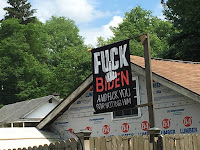 The political landscape likely was a little less bitter in 1970, when the highway workers -- earning less than two dollars an hour and lacking the job protections of a strong union -- sought recognition of the traditionally urban-based American Federation of State, County and Municipal Employees. The three-member board of county commissioners -- all Republicans -- refused. The employees waited until April, after most of the long snow season had passed, to go on strike.

It didn't end until November, after county voters ousted the incumbent commissioners and replaced them with three Democrats who on taking office voted to recognize the union and then reached agreement on a contract. Oddly, as far as anyone could remember, Garrett County hasn't elected a Democrat to the board of commissioners in the half-century since.

During the long battle over union recognition, the commissioners fired the men who refused to return to work and attempted to replace them. That August, the commissioners summoned the new hires to Oakland and brought in a school bus to ferry them to the highway department garages and begin work.

The union had sent members from Baltimore to intervene. And they did so in dramatic fashion, flattening the tires, breaking the windows and ripping out the ignition wires, as state police troopers watched without intervening. That some of the union reinforcements were black did not go unnoticed in a county that, at the time, was pretty much all-white...  and to this day still has relatively few residents of color.

In a cavernous meeting hall behind heavy oak doors, angry voices could be heard -- one of them berating the police lieutenant in charge of the troopers for allowing "those "n-----s" on the bus when "there's no n-----s in Garrett County!" I was among a group of reporters in the lobby there who overheard the exchange. Three of the journalists had an ear pressed against the door, and nearly fell into the room as the disgusted lieutenant opened the door to leave the meeting.

The strike also featured a few other explosive incidents -- with dynamite -- at targets including a bridge, and the fence around the property of one of the commissioners. A striker later was given a jail sentence after pleading guilty to dynamiting the fence.

Many of those at Tuesday's gathering were children and widows of the strikers. Of the 139 county road workers, only about half a dozen survive.

One of them is  Friendsville resident Troy Wakefield, 84, who said he drove a truck for the highway department for 30 years. "Everybody stuck together back then," he told me. "The union even made my house payment."

The union sent a car caravan on a 200-mile drive to Garrett County to bring food and other supplies to the strikers, and raised money to keep the men and their families financially afloat.

Longtime union leader Glenard S. Middleton Sr., executive director of AFSCME's Maryland Council 67 and vice president of the Maryland-D.C. AFL-CIO, emphasized in his remarks that the union and the workers here in "God's country" are family.

Donna S. Edwards, a former social worker who is president of the Maryland State and District of Columbia AFL-CIO, told the crowd that unions are not about being Democrat or Republican -- but about achieving fair salaries and protections that enable workers to support their families and communities.

If the commissioners in office 51 years ago made an error in judgment, it was failing to realize that in the state's most sparsely populated county, most voters were related to or friends of men on strike or were friends of others connected to them. And that likely figured in their election defeat. 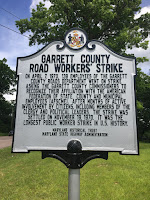 The sign was unveiled by Tom Holler, a retired roads worker whose late father Roy was one of the strikers. He recalled walking the picket line as a 10-year-old with his father. "I was supporting my dad," he said.

"We came together to honor men, women and families who refused to be

divided and fought successfully to move Garrett County forward in 1970," Len Shindel wrote later in a Facebook post, thanking county residents and families of the road workers who joined in support of erecting the sign, and helped organize the ceremony.

"This morning and in coming months and years, we need to continually ask ourselves if we are truly honoring the memory of those we commemorated by crossing our boundaries in the present to address the pressing need of working families in Garrett County for decent-paying jobs, affordable housing and the tools needed to win a stable future in an uncertain and challenging time."