On the Road Again, Chapter 12

A visit to Clinton Country

in search of kneepads,

then Tenn. to visit friends

Back home for close to three months, and I am reminded -- several times a week -- that Chapter 12 of our Great American Road Trip is way overdue. Maybe it's just hard to wrap up so wonderful (and exhausting) an adventure as a coast-to-coast drive.

Some folks have asked what I considered the highlight. Beyond five days in Utah -- making new friends and experiencing a very different lifestyle -- and reacquainting with old friends in several other stops, that's tough to answer.

Several places I wish we'd had more time to explore, among them Little Rock, Arkansas. We had passed through the state on an earlier road trip years ago, when we drove to New Orleans and Dallas. I barely remembered it.

Not so this time, thanks to our first experience of visiting a presidential library -- a complex overlooking the Arkansas River in the heart of Billary Clinton Country just minutes off Interstate 40.

We had scoped the place online, and managed to arrive minutes before the 2 p.m. closing time for lunch at the William J. Clinton Presidential Library and Museum's very pleasant basement restaurant -- with tablecloth, cloth napkins, gracious service, excellent burgers and fries, and for Bonnie a generously poured and presidentially-designed-chilled-glass of white wine. The bill came to about 30 bucks.

Admission to the library and museum, covering three upper floors of exhibit areas, was $8 each (seniors rate -- younger adults pay $10).

If there is a centerpiece, perhaps it is the display few visitors have time to explore -- the towering shelves of blue-bound books containing millions of documents from Bill Clinton's eight-year presidency, so many volumes that even the hundreds upon hundreds visible there represent but a large portion of the entirety.

A digression on morality

I know what you're thinking now: Bubba himself was not Mr. Morality before or during his presidency.

So let's address the Donkey in the Room: There are no kneepads evident under Bill's desk in the impressive, full-size recreation of the Oval Office. And in three hours of exploring the exhibits, we found no mention of Monica (though I have since been informed of an alcove on the second floor with material on the investigation by independent counsel Ken Starr) -- only the inclusion, on a Clinton timeline running across a wall the length of the building, of the House of Representatives vote to impeach him, the subsequent acquittal by the Senate, and the president's apology to the nation for his improper conduct.

The Capitol Hill drama played out 20 years ago,  in the post-election, lame duck days of the 105th Congress and early weeks of the 106th -- in a House and Senate that both remained Republican majority.  While it takes only a majority vote in the House for impeachment, removal of the president requires two-thirds in the Senate, and those numbers illustrate the difficulty of the removal process.

Just two of the four articles of impeachment before the House received majority votes, and both failed in the subsequent trial played out in the Senate -- the party line vote of 45-55 on perjury to a grand jury, and a 50-50 vote on obstruction of justice, both substantially failing to meet the required 67 for conviction and removal of the president.

Those votes echo forward in time, as we approach the 2018 midterm elections. In the event of Democrats taking control in the House, an impeachment proceeding against Donald Trump becomes a distinct possibility. But even if Republicans also lose the Senate, it will take overwhelming evidence of criminality to persuade enough of those remaining to join Democrats in giving Trump the bum's rush out of the White House. (This, even as a Pence presidency might be deemed more appealing to conservative tastes.)

So that's the thoughts generated just by a cursory look at the Clinton Library. But there was plenty more to see, including a replica of the Cabinet meeting room (top photo), cases upon cases of gifts received by the Clintons during the presidency, all manner of political bric-a-brac,  a loop of comical Bill-and-Hillary videos (unlike Trump, they showed a sense of humor even while under political attack), and a multi-floor temporary exhibition of presidential-era and campaign music across generations.

Unfortunately, the only photography allowed inside the Oval Office is done by a museum staffer -- so if you want your picture taken there, it will cost at least 15 bucks. But that seemed to be the only extra cost for visitors, other than a splurge in the souvenir and book shop where Bonnie bought an autographed copy of presidential daughter Chelsea Clinton's children's book, "She Persisted Around the World / 13 Women Who Changed History," and another titled "Photos That Changed the World." 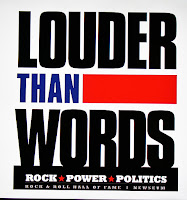 Much of the material in the library and its exhibits are property of the National Archives. But the temporary show,  "Louder Than Words – Rock, Power, and Politics," which ended in early August was created by the Newseum in Washington.

A public affairs officer at the National Archives and Records Administration noted that presidential "libraries" may be different in the future -- starting with Barack Obama's, which will be a museum. Reference material will be available digitally.

She said such institutions can be an "uneasy" marriage of museum and library -- and  that Richard Nixon's in Yorba Linda, Calif., was at first just a museum, out of concern at  how the Watergate scandal would be presented. Notably, its collection now includes some 3,700 hours of recordings known as "the White House Tapes."

Interstate 40 took us toward Nashville, and a turn south on I-24 to Chattanooga -- areas we had visited before, but this time intended for catching up with friends.

In 2012, we flew to the West Coast for three weeks of exploration and a wedding. The latter was Bonnie's first as an officiant, in her capacity as an ordained minister of the online Universal Life Church. The happy couple Tara and Christian, happy to say, still are.

The couple have since moved to a suburb of Chattanooga, where Christian -- after getting his bachelor's degree in the field and waiting several years for a job opening -- has become an air-traffic controller, and Tara is an entrepreneur in the field of online marketing.

They had not yet seen a highlight of their new city -- the Tennessee Aquarium. So that became our main adventure there, exploring its two buildings on opposite corners of an open-air (and in early June, very hot) bustling center of tourism. The aquarium opened in 1992, with similarities to, and designed by the same company as, Baltimore's National Aquarium a decade earlier. Admission is 30 bucks -- cheaper than Baltimore's, but the Imax movie at an extra eight dollars makes up most of the difference.

The overall layout seemed easier to navigate, and less congested, indicating its designers had rethought and improved upon the Baltimore project. And there is a focusing concept in its tracking of the path of water from Appalachian mountains to the sea.

After two nights with Tara and Christian, we retraced our route up I-24 to the town of Columbia, 40 minutes from Nashville, where our photographer friend Brycia and her son Andrew had recently moved. We explored a little of the big city in search of quirky art we had missed on a shorter road trip months earlier, when we moved a carload of odds and ends to Brycia's new house. (On that trip, I left behind my new iPad -- which was subsequently found sitting plugged in on the floor, amusingly visible to an interior security camera.)

And then, in a final burst of stamina, we drove straight from Tennessee back home to Maryland -- the last 740 miles of the journey (stopping only for food, fuel and rest stops) in about 12 hours.

From its beginning about 10 a.m. on May 8 to the ending of the journey late on June 6, our trusty 2012 Toyota Camry's trip-o-meter tally: 7,528 miles. We drove through portions of 20 states, including an odd corner of Georgia that cuts across about a mile of Interstate 24.

The next big trip we're planning is Hawaii, the only state we have not visited among the 50. Fortunately, perhaps, we won't drive to get there. The road just doesn't go that far.