On the Road Again, Chapter 11

... and time expired at cemetery

Not every stop on the trip is an entertaining Roadside Attraction, and crossing Oklahoma requires a somber visit to the site of the Alfred P. Murrah Federal Building in downtown Oklahoma City, destroyed by an act of domestic terrorism in 1995 with the loss of 168 lives.

But getting there proved a challenge. We’ve never seen a city so torn up by road construction and detours. It seemed that every major street into and out of town had been dug up, at least in part, giving our cellphone Mapquest link a workout.

Parking also wasn’t simple, so I opted for the Post Office lot across the street where signs declare it for customers only, with a 15-minute limit. There were plenty of spaces. And I bought a stamp. 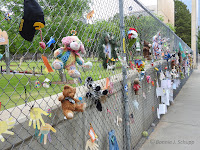 A long fence lines one side of the memorial site, and on it are hanging hundreds of tributes to the dead – including flowers, pictures, stuffed animals (some of the dead were children in daycare there), and written messages.

Where the building stood is a long, shallow reflecting pool, and alongside it a grassy field lined with 168 chairs – each bearing the name of a victim. A National Park Service ranger was leading a group of visitors to the chair of a particular person they were seeking, and afterward explained that the federal service works in cooperation with the nonprofit foundation overseeing the Oklahoma City National Memorial and Museum.

The memorial is flanked by monumental gates, one bearing the time 9:01, one minute before the blast, and the other 9:03. The space between is beautiful, serene, a place of reflection.

We were considering other places
to visit in Oklahoma City, but quirky – and the ranger suggested a building called “the Womb.” It was a warehouse-type structure a few minutes’ drive from the downtown section, that had been used by an arts collective and painted with loving craziness on the outside walls. Unfortunately, the doors were locked and inside it appeared to have been vacated. But visible inside the entrance area was the kind of art installation created by Flaming Lips rock band guitarist Wayne Coyne at Santa Fe’s Meow Wolf.

So we threaded the road-construction maze back to Interstate 40, and Bonnie found another appealing stop: Woody Guthrie’s 1912 birthplace in the town Okemah.

The town had a small park with a Woody statue, mural and memorial, and not far away was the now-vacant birthplace property where a local artist had sculpted its dead tree into the shape of a guitar bearing the words “this land is your land” from what likely is Guthrie’s most enduring song.

Guthrie’s body was cremated after his death from Huntington’s disease complications in 1967. His ashes were scattered at Coney Island, N.Y., but a memorial for him was placed at his family’s plot in Okemah’s Highland Cemetery.

We didn’t realize it at the time of our visit, but we stopped at the cemetery for another oddity – the grave of Barbara Sue Manire, whose tombstone features a parking meter with a “64 year time limit) that has the dates of her birth (April 29, 1941) and death (on her birthday in 2005) and the dreaded words “Time Expired.”