A trip to Parking Court 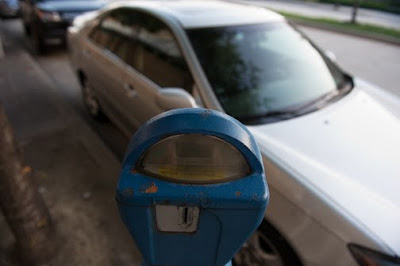 Exhibit A, the fogged-up parking meter (Photo by Bonnie Schupp)

A well-known judge
and a biased ‘jury’
bring acquittal

In Parking Court, pretty much everybody is guilty. And therein lies the entertainment – the appeals of folks who feel unjustly victimized by tickets and sometimes costly fines for the likes of meter violations, cars partially blocking crosswalks, trucks left curbside in residential neighborhoods.

I am one of them today, bringing before the District Court of Maryland in Baltimore my reasoning why a $32 ticket for a meter violation on Key Highway ought to be dismissed.

The judge is a little late, the session having been scheduled for 9 a.m. – but that’s understandable. It’s a long drive from Annapolis, where she lives in the governor’s mansion. Presiding today is District Judge and Maryland First Lady Catherine Curran O’Malley.

If there is any awed recognition in the packed courtroom as ‘Katie” O’Malley walks through the door from the judge’s chamber at 9:15 a.m., it’s not obvious. “All rise,” the bailiff intones, and the judge immediately waves them back down on the two lines of wooden benches.

She is smiling and, I might add, looks very good in black.

Parking Court is the most low-key of all judicial forums in Maryland, almost like the old days when lower courts were housed in police stations. The court building here is on the city’s south side, and named for the late John R. Hargrove – a jurist I had on a few occasions written about in my years as a newspaper reporter.

The rules of the game are fairly simple – particularly since the front bench reserved for city parking ticket agents is the only one that is empty. Anyone who requested the presence of the ticket-issuing agent or police officer is going to win acquittal by default. And those who did not request the officer’s presence but wish to plead not guilty may have to make that request now, posing the inconvenient prospect of another trip to court.

On the other hand, Judge O’Malley says, you may plead “guilty with explanation” in the hope that she will substantially reduce the amount of a fine or court costs. With a few exceptions, that’s the way the cases play out.

There was, however, the guy who was ticketed for parking his city government car too close to a courthouse. He explains that his job is bringing folks like shooting victims to court, and that’s where he’s often parked in the line of his official duty -- without being ticketed.


Her Honor is impressed, smiles, and gestures to the crowd – asking whether the people think he should be found not guilty. The ersatz jury, perhaps a little biased, is unanimous for acquittal.

A few more cases... the guy with the big commercial truck, facing a fine of some $502, explains how he’s on the road a lot but stops when he can to spend some time with his wife, who has breast cancer. He wins a reduction to $50 plus the modest court costs. Crosswalk fine, reduced. Half a dozen names are called, all missing – “failure to appear” noted on the paperwork.

Then it’s my turn.

“David Michael Ettlin, your honor,” I smile, and then – skipping over the formality of entering a plea – outline the facts, how I had parked after sunset at a meter along Key Highway, four or five blocks east of the American Visionary Art Museum, to attend the Oct. 8 opening party for its annual exhibition, and that the meter’s hours of operation could not be read in the dark. But I put in a few quarters anyway, just to be safe, to at least cover it past 9 p.m. – and returned a little later than that to find a ticket under the wiper blade.

Inspecting the meter in daylight, I testified, I found it to be in effect 24 hours a day – and yet, the meters in the same block across the street were in operation only until 10 p.m. nightly. In fact, parking meters around Baltimore are widely varied in their times of operation and it becomes a guessing game when you can’t read the information housed under fogged and scratched meter covers like the one where I got the ticket.

As evidence, I offered three 8-by-10 color photos, showing the meter in daylight, with its fogged plastic cover, and the still-leafy tree whose branches interfered with the streetlight above it.

“What do you think?” Her Honor asked the jury of my ticketed peers.

“Thank you, your honor,” I nodded.

She hadn’t seemed to have recognized me, or wife Bonnie in the second row, though we had posed for a photograph with Judge O’Malley and her husband, Gov. Martin O’Malley, a few weeks ago – along with hundreds of other visitors -- during the mansion’s annual holiday open house.

Perhaps wisely, I didn’t bring up in my testimony what I saw as arbitrary parking enforcement by the city. About three weeks after the Visionary party, we attended another affair there -- her husband’s election night Democratic victory party. Walking many blocks back down Key Highway, we saw lots of cars at expired parking meters, and not one had been ticketed.
Posted by David Ettlin at 11:56 AM

Ah yes, parking tickets. (The last one was via a cop who didn't notice the permit in the window on the dashboard. Copied everything and mailed it. Got recission and an apology.)

I was in New Zealand 25 years ago.
I had a rental car with a right hand drive. I had problems remembering which side of the road to drive on.

I was going into Auckland to buy camping supplies. I pulled off of the freeway and parked at the first meter that I saw. I put a note on the rear window explaining that I was an american and was not comfortable driving in downtown. To just put the ticket on the windshield and I would mail in the payment.

I'd parked next to a large newspaper printing plant. I fed as much change as I could into the meter and left.

When I came back, there was time on the meter. A couple of men came out and told me that they had seen my note and had been feeding the meter for me.

What they found funny was that the parking enforcement person had stopped, read the note, reached into his/her pocket and topped up the meter for me, too.

I agree with Anonymous about New Zealand being wonderful. We drove across both the North and South islands during a two-week visit in 2006, and would do it again in a heartbeat -- if we could handle another 23 hours in airplanes. Beautiful place, nicest people on the planet. Only problem with driving was remembering which side of the traffic island to go around in turning at intersections.

I have a friend who went to dinner in Bethesda, MD with a young lady friend. The only meter they could find had a 1 hour limit. He fed the machine and went to dinner. As is fequently the case in Bethesda, where it can often take an hour just to get seated at a nicer resturant, it took much longer than 1 hour to get dinner. Not wanting to leave his lady friend alone as he periodically went out to feed the meter, he gambled and lost the ticket lottery.

He hold me he want to traffic court for the experience, which for him meant he was hoping to get a good story out of it. When asked by the judge what his plea was, he answered "guilty, I guess". The judge asked then why he was there contesting the ticket, to which my friend asked "Where in Bethesda can you eat a meal in less then an hour?". The judge replied "you're right. Case dismissed".