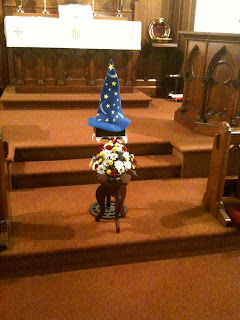 I attended the memorial service today for my friend Mark Owings, a fellow founding member of the Baltimore Science Fiction Society. His wife Jul noted that he died amid his collection of some 15,000 books -- appropriately enough, sitting in a chair with a volume he was reading in his lap. "He died with his boots on," she told friends attending the brief service at St. Luke's Lutheran Church, a short walk from their home in Baltimore's Hampden neighborhood.
Mark, who had a long white beard, had been scheduled to reprise his role as Father Time for Hampden's annual New Year's Eve ball drop, but died on Dec. 30 -- barely a month after being diagnosed with pancreatic cancer.
David Chalker -- the elder of two sons of another club co-founder, the late Jack Chalker -- kindly snapped the photo above with his iPhone: The box containing Mark's ashes, topped by his wizard's hat.
Not in the photo, but high above on the wall behind the altar, was a large painting of Jesus -- described by one of the science fiction friends in attendance as "another master of space and time."
I'm not particularly religious -- OK, I'm not religious, period -- but the wizard hat, the juxtaposition and the comment were wonderful. I'd rather smile than cry at a funeral.
Bon voyage.