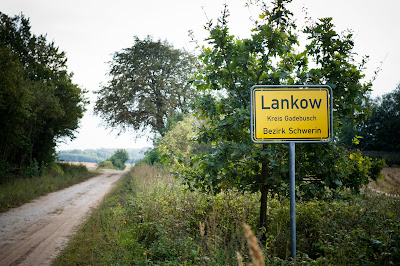 Along the lane, entering Lankow.
(Photos by Bonnie J. Schupp)

A village vanishes
on an Iron Curtain
byway of history

LANKOW, Germany – This is not a dateline anyone will be seeing as Germany celebrates, and other nations remember, Monday’s 20th anniversary of the fall of the Berlin Wall heralding the end of the Cold War.

More than any other physical barrier, the Berlin Wall symbolized the division between East and West – and between Russian-dominated communism and the American-dominated Free World.

John F. Kennedy delivered one of his most dramatic speeches at the nearby city hall, five months before an assassin’s bullets ended his presidency. “Ich bin ein Berliner” is the phrase most remembered from Kennedy’s speech – but in the context of subsequent events, the speech is well worth reading in its entirety at http://www.historyplace.com/speeches/berliner.htm.

Twenty-four years later, delivering one of his most memorable lines, President Ronald Reagan stood at a podium on the Western side of Berlin’s Brandenburg Gate and implored his Russian counterpart: “Mr. Gorbachev, tear down this wall!” (Again, the full text can be found at http://www.historyplace.com/speeches/reagan-tear-down.htm.)

But no such speeches were made at Lankow, an 800-year-old village on the eastern side of the Iron Curtain that was deemed too close to the border by its Soviet overseers.

Our German friend Maja traces her roots to Lankow, where her family owned land for six centuries -- until 1962, when the Russians gave them a few hours to pack up their stuff and leave. In the mid-1970s, the Russians bulldozed the village. Lankow was erased.

Maja was born a few years later, and grew up in a nearby town. She was about 10 when the border itself disappeared, and Germany was reunified.

During our recent visit, I had a chance to look at some of Maja’s old family photos that tell another part of the story – particularly the photos of long-deceased family members in German military uniforms. Through two world wars, the Germans were on the wrong side of history, so the pictures seemed eerie to these American (and Jewish) eyes.

The division of Germany in 1945 was a result of those wars, and how Germans fared in subsequent years was for many determined by which side of the border they called home. West Germany received vast aid from the Free World allies and was largely rebuilt, while East Germany was owned and operated by and for the benefit of the Soviet Union.

The Russians clearly felt something was owed them by Germany, for all the death and destruction meted out by the Nazi regime. And under dictator Josef Stalin, Russia served up plenty of retribution – for example, taking over the Sachsenhausen concentration camp where thousands of its captured soldiers had been executed. Over the next few years, the Russians imprisoned Nazis, suspected Nazis, political opponents and just about anyone the Stalin regime wanted to silence.

As a victor in the war, Russia naturally wanted as much of Germany as it could get.

In rural farming villages, where life before and after the war was somewhat simple, there likely was not an enormous amount of change. Our friend Maya, recalling her early years, said she had a normal childhood – and politics was not evident as part of it. Life was about friends and family, in ample supply.

But you stayed away from the border – which included among its security measures high electric fences, barbed wire, mine fields, concrete trenches, guard dogs, lookout towers and sentry posts with armed soldiers, even a well-manicured stretch of dirt for telltale footprints of anyone daring or crazy enough to attempt a crossing.

For all the normalcy of village life, East Germany itself had become a very large prison, and during the two generations after World War II the fence around it became steadily more impenetrable – while outside this prison, West Germany was a democracy growing in prosperity.

Life was a little crazier in Berlin, where the western sectors were pretty much an island of freedom entirely landlocked by East Germany. One of our friends there, who is a member of a rowing club, recalled an acquaintance who paddled too far from the shore of the river on the border between West Berlin and Russian-controlled Potsdam and was fatally shot.

The economic disparity between the two Berlins became increasingly evident over the years – including new construction that was changing the skyline of the Western side.

In the latter years of the division, Western culture was also having an impact. A photographic history of the Reichstag, which houses the German legislature, includes a 1988 Michael Jackson concert staged outside the building on the western side of the wall. It prompted increased security on the eastern side to keep crowds away. A month later, Bruce Springsteen was allowed to perform in East Berlin and his concert attracted a crowd estimated at 160,000.

When the wall figuratively came down the night of Nov. 9, 1989, and as border checkpoints across the country soon followed suit, people from the East stepped, danced, climbed and drove across to joyous greetings from their neighbors of the West. Formal reunification took nearly a year, but the physical, economic and social rebuilding of much of East Germany – and particularly the former East Berlin – continues.

Touring remains of the wall, traveling through the modern developments and restored historical buildings of the former West Berlin and seeing new construction as well as many starkly unimproved areas in the East, were a fascinating part of a monthlong trip through Germany in September.

But I remain haunted by Lankow, a ghost town whose existence in northern Germany is remembered by a sign erected along a country lane by Maja’s uncles – and by an official memorial stone placed later in what had been the village center. There’s also a display board with a map of the village, and pictures of houses with names of the families that had lived in them. The area is now a nature preserve. 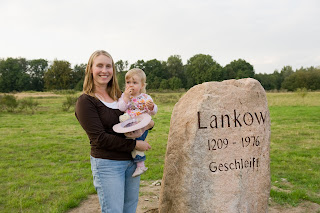 Maja, holding Stella next to the memorial stone.
We visited Lankow as an ideal place for my wife Bonnie to photograph Maja, her American husband Jeremy and their toddler daughter Stella, late one afternoon. And we walked around, exploring remnants of homesteads bulldozed by the Russians – bricks and stones from walls, a chunk of metal from an old stove, bits of broken porcelain. Down the hill, near the river, Maja tells us, there’s rusty farm equipment. But it was not a place we could easily reach without heavier clothing, boots, and maybe a weed-whacker to clear a path.

I picked a few wild apples and pears from trees that had outlived the town.

Sheep were grazing in a nearby field.

It’s a very peaceful place, this village on the wrong side of history, and worth remembering.
Posted by David Ettlin at 10:48 PM

David, do you have any pictures of the town before it was torn down. My relatives were from there. Thanks Eileen

Eileen: We have no stand-alone photos of Lankow before it was demolished, but my wife's Journeys blog entry on our visit shows some of the old photos mounted on a display board at the site. Here's the link (and thanks for visiting my/our blog/blogs):
http://bjschupp.blogspot.com/2009/09/lankow-town-once-was.html

This is a fascinating post. I haven't been able to definitively trace my origins to this town, but it is really interesting to learn more about this town that we unfortunately cannot visit. I found this photo which you might like to add to the post (http://www.schlagsdorf.de/archiv/historische-ansichten.html - see the bottom two photos)