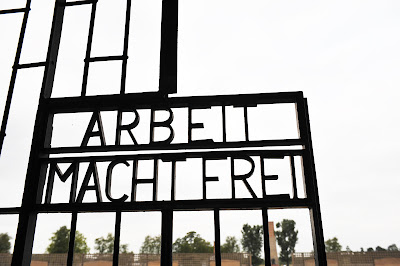 A familiar slogan appears on the gate at Sachsenhausen. Below, Ernst Strnad. (Photos by Bonnie Schupp)

This place of
horror speaks
against those
who would
deny history

Among the German concentration camps of World War II, the name Sachsenhausen was unknown to me before a recent visit to the town of Oranienburg, a bit more than 20 miles northeast of Berlin.

Here, architects of the Nazi regime and the prison officers and commandants who would build, open and run the better-known places like Auschwitz, Bergen-Belsen and Buchenwald worked out and practiced the best ways to dehumanize and murder their victims.

Some were Jewish, but far more were prisoners of war, opponents of the regime, gypsies, intellectuals -- all undesirable to the Hitler regime that grew in power and terror several years before the German invasion of Poland and an explosion of war that would consume more than 50 million lives.

The death toll includes soldiers and civilians alike, but those who were tortured and killed in the camps -- also in the millions -- are the numbers that people looking back on this darkest of ages more often recite.

Tens of thousands were murdered at Sachsenhausen, where more than 200,000 people were imprisoned between its opening in 1936 and the war's end in 1945. They were shot or hung in groups or individually, gassed, starved, frozen, beaten.

We were met on the visitors' parking lot by Ernst Strnad, an 81-year-old Czech-born writer and translator who checks on our nationalities (Bonnie and I from the U.S., and German friends Beate and Ellen) and engages us in a little conversation in English about his late father -- a survivor whose various camp confinements as a political prisoner included Sachsenhausen.

Strnad could recall the day his father was arrested by the Nazi invaders of Czechoslovakia – a trade unionist, he had openly spoken out against the rising tide of facism and had nowhere to hide after his country fell to the Germans.

From the inner pocket of his sportjacket, Strnad plucks a thin and worn leather wallet of papers, including the text in German of President Barack Obama's speech in his June visit to Buchenwald – and Strnad’s own Who's Who in the World biography.

And he offers to guide us through the place, for a donation of 5 euros that supports publication of his books. It was a modest sum (a tad under $7.50 at the current exchange rate), given the expertise of our guide.

He begins the walking tour along a tree-shaded lane that seemed close to a quarter-mile length of a block-and-concrete wall topped with what once was electrified wires.

We stop periodically, Strnad pointing out features like the wiring and the guard tower, with each fact of his litany preceded by the words, “You must know this….”

At first I thought he assumed we already knew what he was about to tell us, but then I realized the emphasis was on the word must – the importance that we know this and that about Sachsenhausen, which was built by prisoners on the edge of Oranienburg and was a successor to a smaller concentration camp that had stood in a more visible center-of-town location from 1933 to 1934.

At the end of the lane, we reach the entrance and see the chilling words ornamentally crafted into the metal gate: ARBEIT MACHT FREI.

That same message was placed later above the gateway to the better-known Auschwitz concentration camp that opened in 1940 in Poland, and where mass killings were vastly expanded – with extermination of targeted populations the object.

The gas chamber for killing and crematorium for victim disposal had already been experimented with at Sachsenhausen, where the sign on the gate was contradicted by this grim reality for many: The only way out was “through the chimney.”

Still, many prisoners left Sachsenhausen – transferred to other camps for various purposes, probably most to eventually die or be murdered in the Nazi camps.

The Roma (gypsies) and Russian prisoners of war by the thousands may have fared the worst at Sachsenhausen, where evidence remains of their deaths – gallows, a firing squad trench, even a measuring device where prisoners were told to stand for height examination and a fatal bullet was fired into the neck through a hole in a wall.

For awhile, the Nazis produced documentation aimed at showing more legitimate causes of deaths, particularly for the Roma, who were subjected to medical experimments. The supposed proof of natural causes of death was charted in autopsy reports after cursory post-mortem examinations. The autopsy room is still there.

Strnad, our guide, points out a prison building within the prison – an oddity but not a redundancy. This little prison building was run by the Gestapo, for special guests and torment. Among them was the Rev. Martin Niemöller, a religious leader whose crime against Adolf Hitler was preaching resistance to the barbarism overtaking Germany.

On the eastern side of the border, Sachsenhauser was used by the Russians for five years after the war – housing over that time an estimated 60,000 prisoners in an odd turnabout for a place where its soldiers had been systematically lined up and shot. About a fifth of the Russians’ prisoners died, mostly of malnutrition and disease, according to a history pamphlet on the concentration camp.

Of the dozens of large barracks-style buildings that housed prisoners, only two remain – despite an arson attack by neo-Nazis in an attempt to erase even them a few years after the 1989 dismantling of the wall that had divided East and West Germany.

One is now a museum, with an unexpectedly large display space under the barracks where you could spend hours looking at every bit of documentation on the killers of Sachsenhausen and their victims. We had perhaps half an hour there, and came out to find Strnad waiting for us.

There were a few more things that “you must know,” like how prisoners were used to test boots and shoes by walking around a track, carrying heavy packs until they dropped in exhaustion. Or how an occasional prisoner would be singled out at roll call for a public beating or fatal torture. Or design features like the path inside the perimeter wall that was, in essence, a death zone for anyone foolhardy enough to attempt an escape.

Sachsenhausen was, in essence, a model prison… at least for the Nazis. It became the headquarters for the entire network of an unimaginably vast killing machine.

The visit left me wondering how, seven decades after the Nazi invasion of Poland officially ignited World War II, anyone – Iranian President Mahmoud Ahmadinijad comes to mind – could deny the horror.

Coming attractions: East meets West, and a close-up look at remains of the Iron Curtain.
Posted by David Ettlin at 5:45 PM