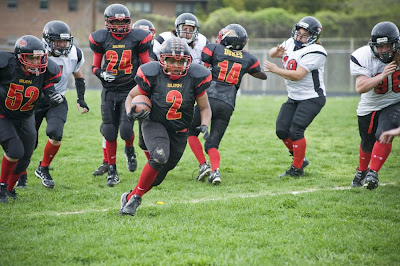 Tydesha Mayo heads for a score in Burn's May 2 victory against Binghamton. (Photo by Bonnie J. Schupp)

Baltimore Burn need
a field of their own

Team playing all over the (city) map

The Baltimore Burn take the field – but not the same field – Saturday afternoon in a women’s tackle football league season that has been up and down, and all over the Baltimore map.

Trouble is, the Burn lack a regular home field as the team has bounced from high school to high school – from the luxury of artificial turf at Mergenthaler Vo-Tech’s immaculate Art Modell Field, to the rougher grass surface at Northwestern High. The June 6 game will see yet another home field, this one at Patterson High.

“We need a field we can call our own,” says co-owner and defensive tackle Debra Miller, adding that for all the cost of renting a school field, a little consistency of place would be nice.

The team played last year in Annapolis, on what Miller says was “a beautiful field.” But it was also too far away from Baltimore for the team to grow its fan base and build up sponsorships and fund-raising. Home game attendance – in the low 100’s at best this year – is clearly not bringing in enough money to pay the bills. (Tickets are $10 for regular admission, but discounted for children, seniors and folks in public safety or the military.

Complicating the Women’s Football Alliance league team’s quest for field space is the fact that it’s not the only women’s tackle football squad in town. Its May 2 game was moved to Northwestern while the Mervo field was being used that day by the Baltimore Nighthawks playing against the Detroit Demolition, both in the Independent Women’s Football League. (According to the league Web site, the Nighthawks fielded only 14 players but managed to hold off Detroit through three scoreless quarters before losing 14-0.)

As for the up-and-down part of its season, the Burn squad won its scheduled road opener through a forfeit when the Connecticut Cyclones sent word it could not field a team. A week later, the Burn’s April 25 home opener at Mervo wasn’t very pretty: A 43-6 loss to the Philadelphia Liberty Belles.

On May 2, at Northwestern, a better-prepared Burn team whipped the Binghamton Tiger Cats 36-0, and that was the score after just half a game. The Tiger Cats’ coach took the visiting team off the field early in the third quarter, complaining about the playing surface and ending the injury-marred game as a Binghamton player lay nearly immobile on the field awaiting an ambulance. (It took nearly 20 minutes after a 911 call before the first responders arrived – a Baltimore fire truck crew – followed about 10 minutes later by a city fire ambulance.)

In a road game in Pennsylvania May 9, the Burn notched a 20-16 win over the Keystone Assault, then returned north May 30 and showed how much it had improved in a road game against the Liberty Belles, losing 13-10 (a far cry from the home-opener loss of 43-8 to the same team). Miller said the Burn had three touchdowns called back on penalties. And a Burn fumble deep in Philadelphia territory late in the game sealed the loss.

Philadelphia, which has defeated Baltimore twice this season, sits in first place undefeated in five games.

The third-place Burn, officially 3-2 on the season, take on the Assault again on Saturday. Kickoff is 4 p.m. at Patterson High, 100 Kane Street.

After that, just two games remain on the regular season schedule – June 13 at Binghamton, and the home finale June 20 against the New Jersey Titans. Exactly where that game will be played – well, we’ll let you know.

The future of newspapers

If you’ve been following The Real Muck reports on the Baltimore Sun layoffs and changes shrinking the print editions while focusing increasingly online, check out this report on a related panel discussion held Tuesday with participants who included its current editor and his predecessor:

The account above, by Joan Jacobson, links to another by panel participant Mark Potts that elaborates somewhat on what he had to say

Far more entertaining is an article by Maryland Daily Record editor Tom Linthicum, who made some remarks from the floor Tuesday. Tom, a colleague in my days at The Sun, interviewed former Sun editors Bill Marimow and John Carroll, former deputy managing editor Marty Kaiser (now heading the Milwaukee newspaper) and former Sun publisher Mike Waller. Their remarks are very interesting and occasionally amusing, like this tidbit from Waller, who was my favorite among the more than half-a-dozen publishers I outlasted at the Baltimore newspaper:

“Tribune management confuses innovation with idiocy. I could wear my underwear over my trousers and Tribune would think that’s innovation. Everybody else would think I was wacko.”

But what about The Real Muck? I’m still thinking about what to say. Some of what I heard leaves me at a loss for words. But I’ll be playing back my tinny digital recording of the event, because something… actually, a lot of things… bother me.

All this stuff about newspapers has distracted me from a fun feature on this blog – although it has not kept me from eating too often at the Szechuan Café two miles up the road from my suburban Pasadena paradise.

But here’s tonight’s message of hope: You are never bitter, deceptive or petty.

here is a site where you can get ton of fortune cookie quotes, maybe now you have a nice resource for cookie messages

Evan:
Thanks for the link. I'll check it out. But I only use the fortunes from my (and wife Bonnie's) all-too-frequent visits to our favorite Chinese restaurant. (Bonnie designed its Web site and took the pictures for it.)
Thanks for visiting The Real Muck, by the way... come again soon!

I started dumping in cookie messages in that site after I eat Chinese.. lol and I eat tons of Chinese food. So, it's coming from first hand source, lol.

it's just fun collecting those.

This information is very helpful for us. Champions League football is favorite for me. Thanks for your kind information.