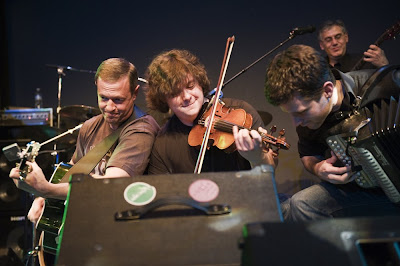 Governor jibes at Post reviews
as his Irish band plays on,
celebrating release of new CD

In a rare occasion for a politician, nary a word of complaint was heard Saturday night as Maryland Gov. Martin O’Malley fronted his O’Malley’s March band in a pair of packed shows at Baltimore’s Creative Alliance.

At least no one in the audience seemed to have a complaint. O’Malley himself voiced a few, with jibes at Washington Post reviews and reporting on his band’s CD’s, including the just-issued fifth – Galway Races – for which the shows also served as a huge release party.

To speculation that the title had something to do with Maryland’s racetrack woes, or problems delaying the award of slot machine gambling licenses, O’Malley said, “I just happen to like the song.”

“Galway Races,” a traditional song, is the first of the CD’s 13 tracks – all covers of songs recorded by others, including Green Day’s “Good Riddance (Time of Your Life),” which effectively helped close Saturday night’s show.

Introducing another cut, the Saw Doctors’ “Wisdom of Youth,” O’Malley became briefly gubernatorial in offering up praise for the nation’s young people, and movingly spoke of his honor in being with the families of those who return from service in Iraq and Afghanistan, and “those who don’t.”

For the record, I haven’t heard any of O’Malley’s CD’s, and am waiting until after I finish this commentary to play Galway Races. Bonnie and I bought two copies (one for an eventual gift to some lucky friend, Irish or no) and stood in line to get them autographed by the governor and his six band partners.

I’d have to crank up the volume a lot higher than our equipment could handle to match the intensity of the band’s late show, which lasted two full hours without a break in the music. O’Malley had a couple of breaks, not only to duck backstage on a few numbers but when his guitar capo virtually exploded and again when one of the strings snapped in a dramatic musical moment. (The governor, not missing a lick, showed himself equally adept at five-string guitar while playfully whipping the dangling sixth at fiddler Jim Eagan.)

O’Malley’s March absolutely rocked the old Patterson movie theater, restored as home to the nonprofit Creative Alliance arts organization. From our front-row vantage, Bonnie had to deal with seat shake and what felt like floor shake from the music as she experimented with her new Nikon camera and took dozens of pictures of the show, whose proceeds at $25 a ticket benefited Creative Alliance.

What can you say about a band whose weakest link is, in fact, its leader. O’Malley has, at best, a very average singing voice (I confess to having the worst) and seems to be a good, but not necessarily great, guitarist. But he clearly knows how to surround himself with people more talented than himself. I view that as the mark of a smart politician. The seven of them together soared to musical heights in the performance. And how great a voice does anyone expect in a rock band, Irish or otherwise?

Among those taking in the pre-St. Patrick’s Day show was a visiting (northern) Irish politician – Councillor Gerard Diver, or as he was introduced to draw the winning tickets in a raffle for a basket of shamrocks, “Mayor Gerry of Derry.”

He clapped and laughed throughout the show, and when asked afterward whether O’Malley could make a go of it musically in Ireland, Mayor Gerry in a broguish chuckle observed, “He’s got a lot of energy.” (According to the Derry Journal, Diver himself played in a well-known local band called Tie The Boy before entering politics. He was the guitarist. And the band practiced in the drummer’s basement… interesting, considering that the latest O’Malley CD was recorded in his drummer’s basement.)

At the show’s finale, I thought about exhorting an audience chant of “four more songs.” But artistically, it wasn’t the thing to do. The show started out strong, and ended even stronger. It was worth every farthing.

And what the hell, I’m not a newspaper journalist anymore. I may not agree with him or any politician on every issue, but I like O’Malley. He plays with passion. 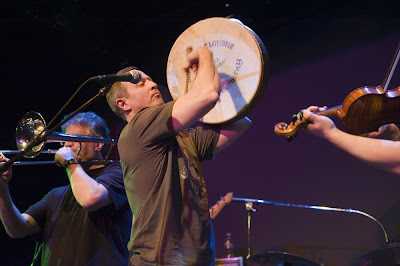